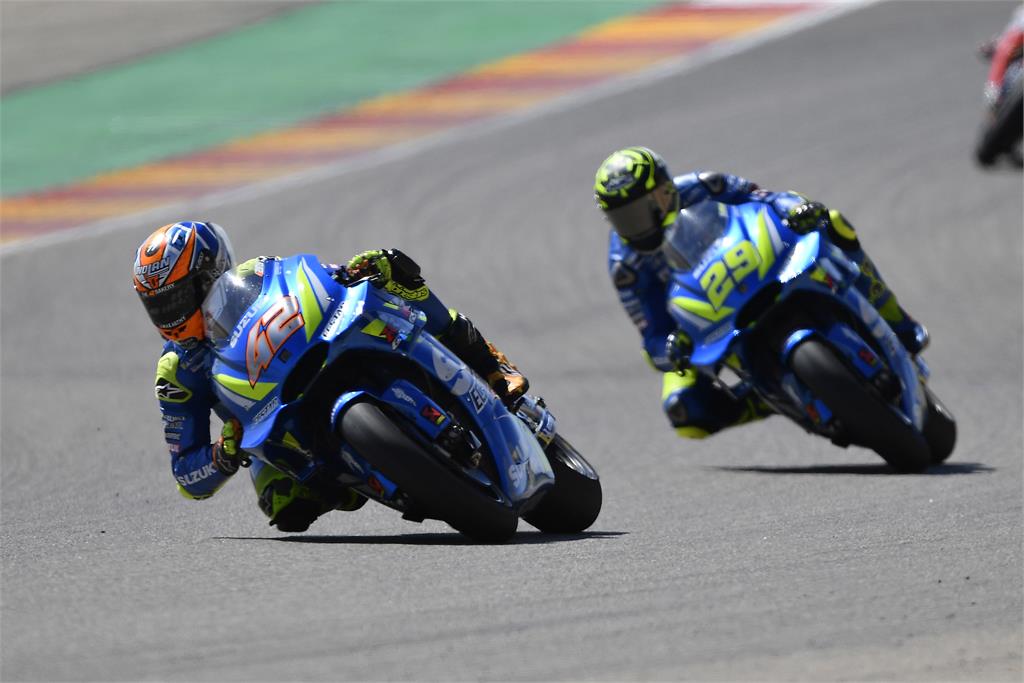 The Aragon Grand Prix marked the high point in the championship for Team Ecstar Suzuki as riders Andrea Iannone and Alex Rins secured the team’s best result of the season so far.

All the talk in the build up to the weekend had been positive. Knowing that they cannot compete yet with the likes of the factory Repsol-Honda and Ducati teams with straight-line speed, Suzuki focused all their set up work on two objectives: cornering speed and suspension.

With the circuit being composed of 17 corners – a perfect blend of high, medium and low speed and considerable changes in undulation – setting a bike up to glide through each apex would significantly compensate for time lost on the 1 kilometre back straight. Additionally, with the Spanish climate boasting sunny skies and hot temperatures, ensuring the bike would be kind to its tyres would be critical.

It cannot be underestimated how much the physical loads forced onto the tyres through the front forks and rear shock spring affect the set up. In an ideal world suspension would be set as softly as possible, allowing the front forks to absorb every bump and vibration, enabling the tyre to ‘float’ over the track. The reality however, is that setting the suspension too soft reduces the feeling the rider receives as to what that tyre is doing – which ultimately affects confidence in both attacking corners at speed, and how much braking the rider feels they have to do. Effectively, they are simply reduced to blind guesswork.

In contrast, set the suspension as stiff as you can, and the rider will feel everything the tyre is doing. They will also feel every bump and vibration too to the point where all the feelings merge and no clear distinction can be made. It is what is referred to in the industry as the dreaded ‘chatter’. Additionally, setting up the suspension in such an aggressive way, is a guaranteed way to destroy the tyres within a handful of laps.

Finding an optimal balance between the two settings, is somewhat of a ‘holy grail’ for riders and teams alike. Indeed, this very thing hampered the Suzuki team all throughout 2017 as both riders regularly bemoaned a lack of ‘front end feel’.

Having spent both Friday practice sessions working tirelessly to find such a balance, which involved customary excursions to the gravel traps, both Iannone and Rins had clearly found something to work with. The laps times tumbled, and off-track escapades became fewer and further between. Most tellingly of all, the times didn’t fall away during long runs. Qualifying saw both riders secure top ten grid positions, but it was in the race where the hard labour on the set up came to fruition.

Iannone (P3) and Rins (P4) diced with each other throughout the 23 laps, with the pair battling each other all the way to the chequered flag. However, as a complete demonstration of their success, it was the gap to race winner Marc Marquez (Repsol Honda) and second-place man Andrea Dovizioso (Ducati) – just 1.26 seconds. Testament to how far Suzuki has improved their GSX-RR machine this season.

The podium for Iannone also means that the team have lost their concessions for the remainder of the season. For those unfamiliar with how this works, every factory team who did not score a podium finish (in dry conditions) during the 2017 season was given a much larger allocation of test days, plus slightly relaxed regulations on fairing homologations and engine allocations.

To offset this, a points system is used during the season to gauge the competitiveness of those teams with concessions – 3 points for a win, 2 points for a 2nd place, and 1 point for a 3rd. Scoring 6 points across the season will see the factory ‘lose’ its concessions as they are now deemed competitive enough to no longer require them.

Suzuki are not expecting quite as strong a result next time out, in Thailand. The layout of the Buriram circuit makes it a Mecca for those with serious speed on the straights. However, with more technical tracks such as the Twin-Ring Motegi (Japan) and Phillip Island (Australia) on the horizon – there is still the likely result of more podiums for the smallest of the Japanese factory teams.