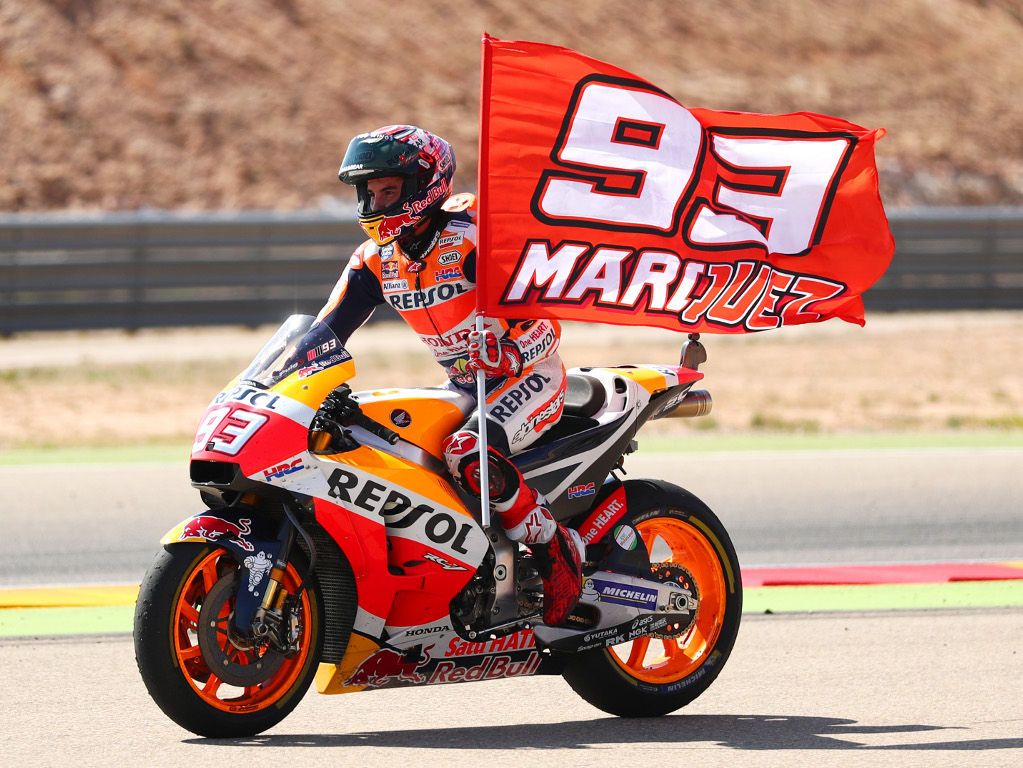 In the heart of the Spanish desert, the destiny of the 2018 MotoGP World Championship has become a little closer to being decided this afternoon, after a thrilling grand prix at Aragon Motorland.

It was an explosive start from the lights as Jorge Lorenzo (Ducati) crashed out at the first corner. The pole-sitter ran in hot under braking and brutally high-sided out of the grand prix, completely wrecking his championship hopes. The Spaniard has looked strong all weekend, particularly over the long runs during Friday practice, and was considered the pre-race favourite. It is the first time that Lorenzo has crashed out in two consecutive races was in 2011, at Malaysia and Valencia.

Andrea Dovizioso (Ducati) therefore inherited the early race leader with Marquez (Repsol Honda) behind. Marquez had gambled pre-race by electing to run a soft slick rear tyre. Once settled into their rhythm, the two pushed on hard enough to comfortably clear their nearest pursuers, but still being slow enough to not burn out their tyres either. Once the rear tyre loses grip around Aragon and starts spinning, it’s generally game over for the rider.

Dovizioso and Marquez diced with each other throughout the race. The pair, reigniting memories of last season’s thrilling championship duel, put on a masterclass in racecraft this afternoon. The overtakes were hard won, and every last inch of tarmac would be used in the process. But each move was clean. Make no mistake, these are two riders at the very pinnacle of their trade.

Defying the recent convention of the long left-handed final corner being the prime overtaking spot, this contest was at its hottest through the highly technical corners of the opening sector. The Ducati would storm ahead through the sweeping right-hander at turn 2, whilst the Honda would have the edge through the fast left-hander at turn 5. All of which resulting in the two, more often than not, being locked next to each other as they dropped through the corkscrew section.

Marquez was finally able to break free after setting a scorching time on the penultimate lap. Having forced his way back into the lead at turn 12, the Spaniard used every ounce of rubber left on his tyres to prize himself away from his closest championship challenger. Such was the equality of performance between the Honda and the Ducati, the slender advantage of just 0.3 seconds was ultimately enough of a buffer.

Team Ecstar Suzuki firmly enjoyed their day in the sun as Alex Rins and Andrea Iannone engaged in an equally thrilling battle for the final podium spot. The pair nearly came to blows early on, as Iannone forced his teammate to the edge of the track down at turn 12. Once the early race nerves had abated, the duo showed a remarkable turn of pace to always keep the race leaders within touching distance. The duo regularly traded places across the 23 laps sometimes cleanly – sometimes considerably less so. The gestures made to Dorna’s world feed cameras by team boss Davide Brivio aptly summed up the drama.

Dani Pedrosa (Repsol Honda) and Aleix Espargaro (Gresini Aprilia) both enjoyed a timely return to form this afternoon. The duo, although never in contention for the podium, spent the race locked together scrapping over fifth and sixth places. On this occasion, it was Pedrosa who took the bragging rights. Nevertheless, sixth place is the best result for Aprilia so far this season. To say 2018 has been a slog for the Noale factory team would be an understatement, but today is proof that progress with the RS-GP is being made.

Yamaha’s woes continued today. Valentino Rossi (P8) and Maverick Vinales (P10) was all that the factory team could manage. For Rossi, the result however should be classed as a recovery job well done, having started the race from the sixth row of the grid, in P18. Coming into this round it was clear to everyone that it would be difficult weekend for the factory team. However after testing here a few weeks ago which was reportedly very positive for the team, overall the Aragon GP will go down as yet another dark chapter in their Annus Horribilis.

The European leg of the season has now been concluded. In two weeks’ time the MotoGP circus will make its debut at the Buriram circuit, Thailand.

You never say never in this sport, especially in grand prix racing, but with a lead of 72 points over his rivals, it is now very hard to see anyone other than Marc Marquez from being crowned 2018 world champion.