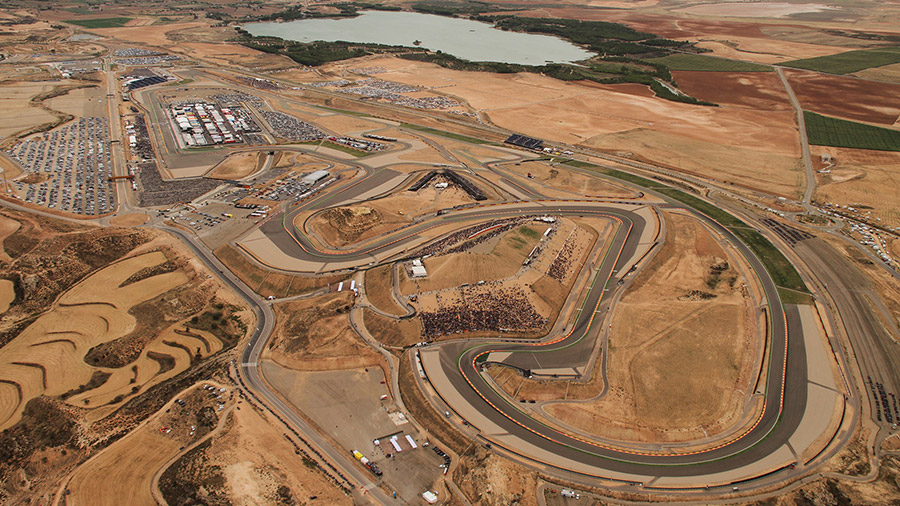 The MotoGP circus rumbles into the heart of the Spanish desert this weekend, as the championship battle resumes at the breathtaking Motorland Aragon circuit.

Marc Marquez (Repsol Honda) arrives at his home round with a 67-point lead at the top of the standings, and perhaps with one hand already on the world championship crown already. The Spaniard has been formally recognised this week by the Motorland circuit, having had the sweeping left-hand turn 10 named after him. Form at this circuit is good for the four-time premier class champion, having claimed three victories here in 2013, 2016 and 2017.

That said, Marquez has not taken victory since the German Grand Prix back in July. Failure to win this weekend, would see him equal his longest winless streak in MotoGP (4 races Malaysia, Valencia (both 2017), Qatar and Argentina (both 2018). Whilst this is still a record which most mortals will dream they had, at this stage of the season – and with the world championship at stake – this is the sort of thing that could seriously test his mental resolve.

This weekend’s grand prix presents Ducati with its ultimate ‘litmus test’. The Desmosedici-GP18 is a missile in a straight line, much like its predecessors. However this year, the Italian team has been very vocal about the performance gains they have made with the stability and cornering ability of their machine. Aragon-Motorland will provide a thorough examination for these claims, with the circuit boasting numerous ‘S’ bend switchbacks, and long medium to high speed corners. It is a test which Ducati riders must not only pass, but completely out-perform their rivals if they are to realistically keep up the fight for the championship.

Expecting to lead the way for the factory team this weekend is Andrea Dovizioso. The Italian reasserted his position as Marquez’ closest title contender, having taken victory last time out at Misano. Motorland Aragon has not traditionally been a happy hunting ground for Dovi, having not finished on the podium here since 2012 with the satellite Tech3 Yamaha team. Nevertheless, he is confident that he will be able to continue his championship resurgence this weekend having spoken yesterday in the press conference that: “The bike is fine, it is now about setting a good rhythm”.

Behind the main battle for the championship, there is the increasingly thrilling on-track scrap for the best of the independent riders. Cal Crutchlow (LCR Honda Castrol) currently leads the way on 119 points, after a strong ride in Misano saw him finish on the podium. Johann Zarco (Monster Tech3 Yamaha) and Danilo Petrucci (Alma Pramac Ducati) are both hot on his heels with 110 points each. Petrucci, buoyed by increasing support from the Ducati factory (in preparation for his arrival at the factory team in November), believes this weekend he will have the pace to push the frontrunners all the way: “We have same support as they (Dovizoso and Lorenzo) do. For sure we will have pace to fight for podium. Maybe more.”

For the Movistar Yamaha factory team however, this weekend is expected to be another painful experience. Although considerable progress has been made with the electronics since the summer break, the Aragon circuit relentlessly targets Yamaha’s other main deficiency – engine power. With three long straights around the course, a bike which is sluggish under acceleration will be severely exposed against the competition.

Valentino Rossi and Maverick Vinales know this, and as such will be focusing the M1 to perform as smoothly and efficiently as possible through the track’s 17 corners in order to recover as much lap time as possible. Such is the way the season has unfolded for the team, just having one bike in the top five here will be considered a good result.

Finally, there is a newcomer to the championship this weekend. Jordi Torres will be make his MotoGP debut for the Reale Avintia-Racing Ducati team, standing in for the still injured Tito Rabat. Torres will be most familiar to followers of World Superbikes, with the Spaniard riding in the series for MV Agusta. He is no stranger to the grand prix paddock, having ridden for multiple seasons in the old 125cc category and the Moto2 class. In the latter he had considerable success, being a multiple podium finisher and a race winner back in 2014.