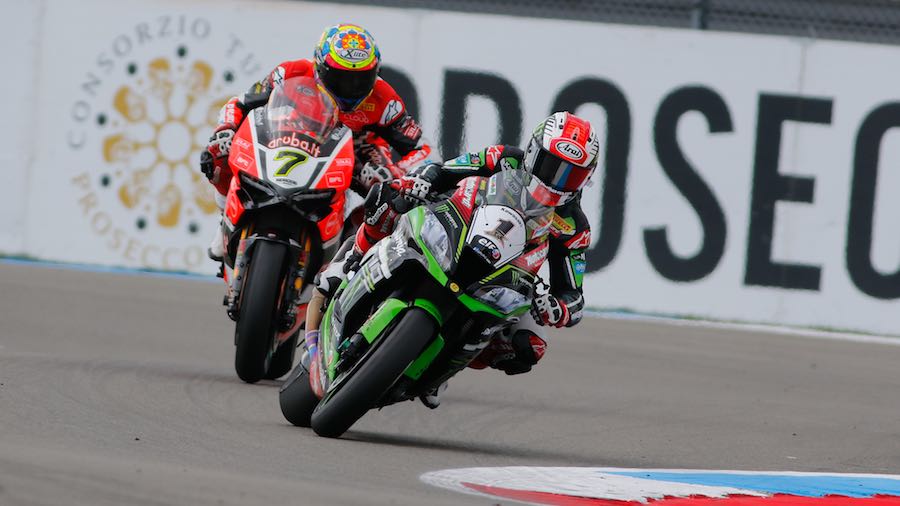 Jonathan Rea stretched his winning streak to six straight races this afternoon at the Autodromo Algarve – also securing his sixth straight victory at the circuit (a run which began back in 2015).

Due to the partial grid reversal system implemented for Sunday’s race, Rea (Kawasaki Racing Team) started in ninth place. Such is his extraordinary ability, combined with the strong ZX-10R, he made light work of most of his rivals climbing up to fourth by the end of the opening lap. Unlike yesterday, Rea was made to work for his lead, and was not able to storm clear into the distance even when he had just clear tarmac in front of him. Today was about providing a timely reminder to the (very few) critics he has left, that his racecraft is as razor sharp as ever.

In the closing stages, as his rivals threatened to close him down, Rea managed to raise his own tempo, demonstrating to the others that he still had plenty of rubber left on his tyres should they want to push the limits with him. They were not. The art of subtly controlling a race is yet another area of strength for Rea. No matter what his rivals tried, Rea always had an answer good enough to beat them off. A sixth straight win secured, and the championship lead has now grown to 116 points.

Chaz Davies (Aruba.it Ducati) produced another heroic display this afternoon. Starting from pole position, the Welshman once more defied the pain barrier for as long as he could, dueling with Rea throughout the first half of the race for contention of the lead. When fully fit, Davies is the only man who can consistently challenge the triple world champion at the front of a race.

Even when nursing a badly broken collarbone like today, Davies was more than a handful. Wringing the neck of the volatile Panigale-R around the 20 laps of the roller coaster that is the Portimao track. Eventually though not even he could defy his injuries and, having eventually been passed by Rea, dropped back to a more manageable pace. Davies ended up finishing in P4, just ahead of the other KRT machine ridden by Tom Sykes.

Whilst a podium place was ultimately a step too far for Davies, it was not so for his teammate Marco Melandri. With his future in WorldSBK up in the air, the veteran Italian needed a strong showing this weekend. That is precisely what we got. Third place today means that Melandri has now featured on the podium three races on the bounce – equalled only by Rea. Although never really in contention to challenge for victory in either race, the points accumulated this weekend has seen Melandri close down Sykes in the rider standings to just 11 points.

Michael Van der Mark (Pata Yamaha)  produced one of the overtakes of the season to secure his second place finish today, disposing of both Davies and Melandri simultaneously at turn one on lap 14. Since taken his maiden victory in the class – back at Donington in May – the Dutchman has gradually begun establishing himself as the number one rider within the team. Today marked the ninth time this season that the 25-year old had finished on the rostrum.

In contrast, it was a very difficult weekend for Alex Lowes on the other Pata Yamaha machine. As with Saturday’s race, the British rider found himself caught up in the mid-field carnage on the first lap, and found himself bogged, scrapping for minor points places. Lowes finished down in P11 – some 20 seconds behind the front runners, and just fending off American rookie Jake Gagne (Red Bull Honda).

After the calamity of race one, today’s outing was far more straightforward for Milwaukee Aprilia. Having fallen off when a podium finish had beckoned, Lorenzo Savadori produced a solid ride to finish in P6, out-dragging his teammate Eugene Laverty to the line on the final lap. For Laverty, P7 draws a line under this weekend where lady luck so cruelly turned away from him.

Just behind the Aprilia riders came Michael Rinaldi (Aruba.it Ducati Junior Team) and Loris Baz (Gulf Althea BMW) in P8 and P9 respectively. The latter has enjoyed a good weekend on the privately run S1000RR machine, finishing both races inside the top 10.

The 2018 FIM World Superbike Championship resumes with the French Round at Magny-Cours, September 28-30.