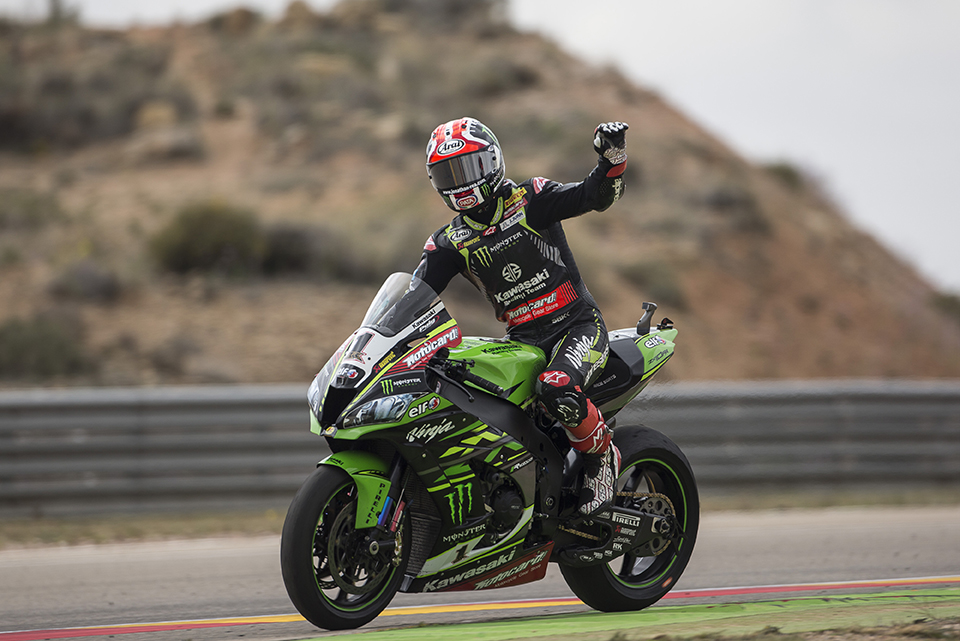 Jonathan Rea made the holeshot after Marco Melandri (Aruba.it Ducati) ran wide at the first corner. He had company from the Italian for the early laps, but it wasn’t to last. Once he’d settled into his rhythm, Rea did what comes most naturally to him – set a series of blisteringly fast lap times and clear off. The phrase “out of sight, out of mind” could not be more apt to describe this strategy.

Such a plan requires a very good motorcycle (which the Kawasaki ZX10R undoubtedly is) and a rider capable of pushing it to the limit, and making zero errors. Rea is a master at balancing the relentless lap speed with astonishing consistency, and today was the most complete example of this. Once Melandri had been cleared, a fifth straight win around the Portimao circuit for Rea was a formality. It was also his fifth victory in a row this season, extending his championship lead out to a staggering 104 points.

Behind, Melandri was consigned to second place from early on in the race. However, this is not to say his race was uneventful. In truth, it was anything but. The battle for the podium was fierce, and an exclusively all Italian affair as the Ducati man faced his challenge from Lorenzo Savadori (Milwaukee Aprilia). The pair diced back and forth throughout the first half of the race until, on lap 11, Savadori lunged up the inside into turn 1 but lost the front end under braking.

Savadori’s crash ended a cruel afternoon for the team. Eugene Laverty who earlier in the day has secured his first pole position start for the first time since 2013. One can only wonder if he may have been able to have offered a challenge to Rea, as he was punted out of the race by Xavi Fores (Barni Racing Ducati) at turn 2 on the opening lap. It was a worrying moment for the team – the Irishman has already suffered serious injuries following an enormous crash earlier this season at Buriram. Fortunately, he walked away safely today. The team will be praying for better fortune tomorrow.

It was a mixed race for Pata Yamaha. Michael Van der Mark brought home yet another podium finish (P3) today. The young Dutchman had looked solid throughout the three practice sessions on Friday, and showed good single-lap pace with a starting position of P5 on the grid. Race pace today proved to be equally consistent. When Savadori unceremoniously dumped his Aprilia in the gravel, the Yamaha rider inherited third place. Another rostrum finish in this thoroughly impressive campaign which the 25 year-old is having.

In contrast Alex Lowes spent the entirety of today’s race in damage limitation mode. Following an unfortunate crash in the dying moments of qualifying, he had to make do with a grid start of P12. Things got worse when he became caught up in the first lap shenanigans and found himself pushed down to the back of the pack. Lowes eventually climbed his way back into P10, securing a handful of points.

With the podium places secured, attention in the closing stages of the race was focused on a fantastic scrap between Jordi Torres (MV Agusta) and Loris Baz (Gulf Athea BMW) over sixth place. Buoyed by the announcement on Friday night that he will be making his MotoGP debut next weekend at the Aragon Grand Prix, Torres did what he could on his out-dated MV-F4 machine to hold his position. Inevitably though, the superiority of the BMW S1000RR could not be denied, with Baz forcing his way through at the hairpin of turn 5.

Despite visibly struggling all weekend with his collarbone injury, Chaz Davies (Aruba.it Ducati) made a super start to the race, making up eight places on the opening lap. The first half of the race was spent keeping Van der Mark within sight, but inevitably fatigue took its toll on the Welshman, and he was forced to drop to a more manageable pace. Nevertheless he still had enough in hand to keep Tom Sykes (Kawasaki Racing Team) at bay, securing P4 today and ensuring he starts tomorrow’s race from pole position.