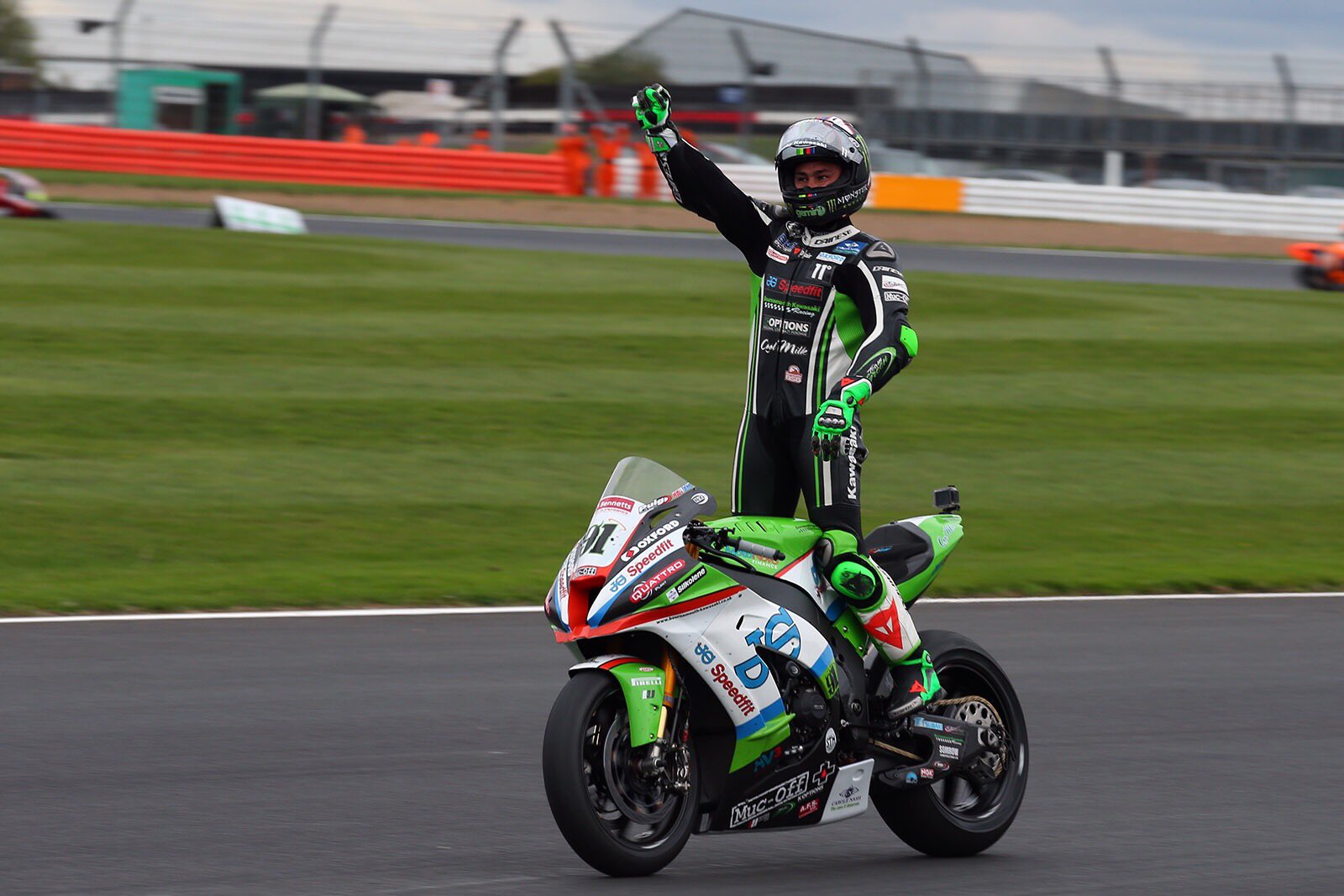 Leon Haslam (JG-Speedfit Kawasaki) took another step towards securing his maiden British Superbike crown, but was pushed to the limit under gloomy skies at Silverstone.

From lights out to chequered flag the battle on track raged. It was always expected to be a fast and furious round on the short 1.6 mile ‘national circuit’ configuration, with no less than seven riders still trying to secure a place in this year’s championship showdown. In the practice and qualifying sessions leading up to this afternoon’s race four different manufacturers – Suzuki, Kawasaki, Yamaha, Ducati – had topped the timesheets.

There was drama even before the race began. Christian Iddon (Tyco-BMW) was declared fit to race only moments before the riders made their sighting lap to the grid. This was despite injuring his collarbone in qualifying this morning. Such is the desire to compete when a place in the title showdown is up for grabs. There was also a new engine for Josh Brookes (McAms-Yamaha) after his previous R1 motor expired during the dying moments of qualifying earlier in the day.

At 4.15pm, with engines at full revs, the lights went out on the gantry and the race began.

It was a terrific start for polesitter Bradley Ray (Buildbase Suzuki), who perfectly launched off the line, and having gained a lead of several bike lengths to his pursuers by the time he reached the famous Maggots and Becketts complex. Behind him it was Jake Dixon (RAF Regular and Reserves Kawasaki) who led the chase.

However despite his brilliant start, disaster struck for Ray on lap 5 of 30 when under braking into Brooklands, lost the front end of the bike. Despite the bike clearly showing no damage, the BSB racing rules state that should a rider “become detached from his motorcycle” he cannot rejoin the race. A cruel blow to the showdown hopeful, but given he is still inside the top six places in the standings, it is by no means the fatal blow to his championship aspirations. He will race again tomorrow, and will look to make amends.

Although his place in the showdown has long since been assured, Haslam was not content to sit mid-pack and settle for points. The runaway series leader kept out of trouble in the opening laps, before settling into his rhythm – picking off riders quickly and relentlessly – as he stalked the early race leaders. Keeping within close range of the McAms-Yamaha duo of Josh Brookes and Tarran MacKenzie through the latter half of the race, the ‘pocket rocket’ chose his moment to attack with precision. His pass on MacKenzie will live long in the memory of everyone who witnessed it:

Holding his nerve and never fully closing off the throttle, Haslam hugged his Kawasaki machine around the outside of his rival at Brooklands corner. It was certainly in the ‘high risk – high reward’ department. One false move on the dirty off-line track and his bike would go crashing onto the tarmac, potentially collecting MacKenzie’s Yamaha in the process. This may well have been the case for a less experienced racer. As it was Haslam found the grip’s edge and, counter steering his way (almost speedway-style) through the corner he held the bike upright. The reward was the inside line at Luffield – the tightest right hander on the circuit. Straighten the bike up, jam down through the gearbox and stop the bike on the apex. An incredibly difficult maneuver to pull off for even the most experienced racers. Haslam, frankly, made it look like child’s’ play.

With MacKenzie cleared, there was only Glenn Irwin (BeWiser Ducati) left in Haslam’s way. but a poor start from the Ulsterman saw him initially swamped by his rivals and forced back down the field. His response was immediate and, utilising the full straightline power of the v-twin Panigale R, had quickly caught back up to Ray and was in prime position to inherit the lead when the unfortunate Suzuki rider ran off the circuit. However, even with this advantage on the straights, he was ultimately no match for Haslam’s pace through the corners. Whether it be in World or British Superbikes, the Kawasaki ZX-RR is the most stable in the bends. Amongst many things this makes the bike very kind on its tyres – something which is crucial in the latter stages of a 30-lap race. As such, on the penultimate lap, Haslam pulled alongside Irwin as the two title contenders thundered into Copse corner and the superior grip from the Kawasaki did the rest.

MacKenzie secured his maiden podium finish this afternoon. The 22-year old has learned quickly this season, despite some bad luck in the first half of the season with technical problems hindering his competitiveness. Today, spectators and TV viewers were given a timely reminder of his full ability. Not daunted by being partnered at McAms-Yamaha this year by former BSB champion Josh Brookes, ‘Taz’ more than held his own in the scraps with Irwin, Haslam and latterly with his teammate. His overtake of Brookes on the final lap, forcing past the veteran Australian at Luffield cleanly was no easy feat. He may well party tonight celebrating his first rostrum. The first of undoubtedly many more to come.

It was a brilliant ride from Haslam, who claimed his tenth victory of the season and extends his lead in the championship to an incredible 114 points over Dixon. Even when the showdown points and podium credits have been taken into account, the ‘pocket rocket’ will have a commanding advantage over the rest of his rivals.