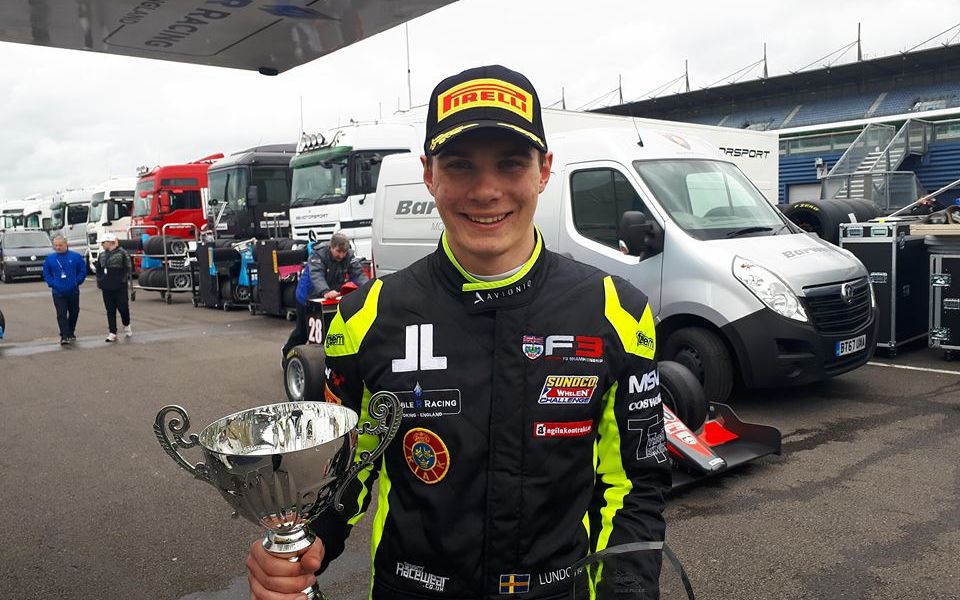 British F3 championship leader Linus Lundqvist says he and his Double R team have struck the right balance between pace and consistency this season after another strong weekend at Silverstone.

While championship rivals Kush Maini and Nicolai Kjaergaard toiled in Northamptonshire, Lundqvist won, had second and a sixth across all three races.

And the Swede was keen to stress the importance of picking up points in every race.

“Every time we speak it’s been about consistency and we showed that today again, Kush and Nicolai being behind me and as they were the closest rivals I’m really happy with the second place.

“We’ve been in the mindset, with the team having won the championship in 2016, that if you want to fight for the title you have to be consistent. We’ve shown that through every race weekend that we’ve a race each weekend and that we’re not just picking up seconds and thirds, we’re actually there on pace. We’ve found a very good mix between raw pace but also consistently scoring.”

While he now has a commanding lead in the standings after making gains on Kjaergaard and Maini over the past two weekends, Lundqvist knows he can’t afford to relax.

“We’re only halfway through the season, there is still a long way to go and a lot can happen. Two DNFs and our lead is gone.

“It’s about staying focused and taking valuable points and hopefully we will be able to fight for the wins in future rounds too.”

While Gamble won, Lundqvist was not disappointed to finish second in the final race of the day as he finished ahead of Maini and Kjaergaard and further extended his lead to 56 points.

“Without Tom it would have been a perfect race, all in all you always want to fight for the win and I tried to put pressure on him but he was just a little too quick for us but looking back, it’s been a solid weekend.”