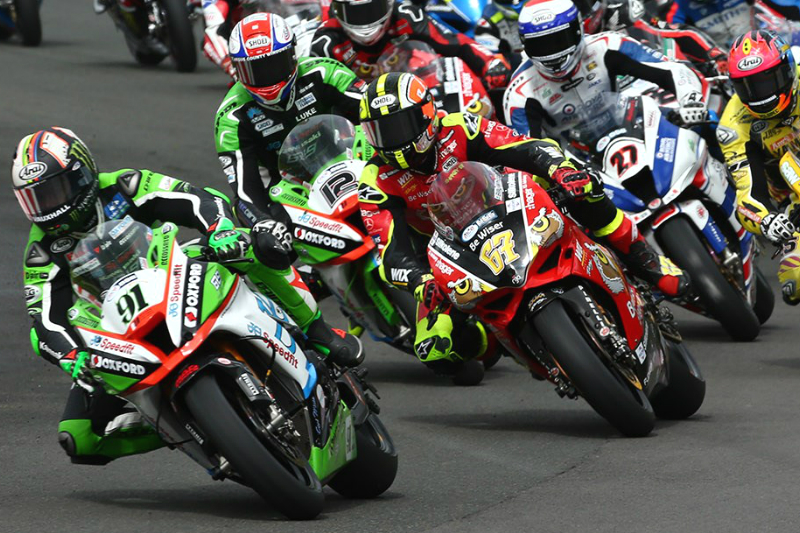 The 2018 British Superbike Championship promises to be one of the best yet, with a line-up of established stars mixed with young talent which have accrued the experience necessary to warrant serious consideration for this year. But still, there can only be six riders who make the Showdown for the final three races, and here we will be discussing who they might be.

For this list there is only really one option when choosing where to start, and that is with the reigning champion: Shane Byrne. The six-times British Superbike Champion is, as ever, the benchmark for this season, the target. Last season he finally defended a title successfully, beating Leon Haslam against the odds in the Brands Hatch finale. In the build up to this season, Byrne has targeted Niall Mackenzie’s record of three championships back-to-back. Since his return to BSB back in 2011 after a two-year stint in the World Superbike Championship, Byrne has failed to finish outside the top three in the standings, and claiming the title on four occasions: 2012, 2014, 2016 and 2017. Those four add to his titles in 2003 and 2008, to make him by far the most successful rider in British Superbike history, and with the PBM Be Wiser Ducati underneath him, the number 67 has to be the favourite for the title this season.

However, that is not to say that Byrne has the championship in the bag, not by any means. The list of riders wishing to dethrone the reigning champion in 2018 is pretty extensive. Still, there can only be five to make the list.

It makes sense to start with Leon Haslam. The ex-500 GP and World Superbike rider is still yet to win a championship since he won the National Scooter Championship back in 1997. He came agonisingly close to the BSB crown last season, with a comfortable margin in the championship heading into the last round at Brands Hatch. But a weekend of discomfort with the bike and finally a catastrophic brake failure in the final race of the season, ejecting himself from the bike at over 170mph at Hawthorn Bend. The crash gifted the 2017 title to Byrne, but Haslam is certain that escaping it without serious (by motorcycle racing standards) injuries has given him the motivation to build another title challenge in 2018, in which he will compete once again with the JG Speedfit Kawasaki squad. With the continuation in the team from the last two seasons, the familiarity with the bike and the added motivation of the way last season ended for Haslam, it would be remarkable to see him not make the Showdown, or fight for the championship. Will 2018 finally be his year?

A third rider who is considered a shoe-in for a title shot is 2015 champion Josh Brookes. That title came after six seasons of failed attempts, and was partly the result of the then-brand-new Yamaha R1, which he rode for Shaun Muir. Back then he had about as much factory support as you might expect in a national championship. Last year, though, was not the same. After he came back from a disappointing year aboard BMWs for the same SMR outfit he won the BSB title with, he teamed up with Anvil Hire Tag Racing to pilot one of their R1s for 2017, notably without the factory status he perhaps enjoyed in 2015. Even still, he managed to take second in the championship, partly as a result of Haslam’s final race crash, and three wins through the season at Thruxton, Silverstone and Brands Hatch. This year Brookes joins the team who now have the official support of Yamaha: McAms Yamaha, and the expectation will be a repeat of the results of 2015, or at least the final result of the championship.

It is fair to say that the three riders mentioned so far have been fairly safe choices. Of course, it is motorcycle racing, so as we all well know anything can happen, but nonetheless there would be a lot of surprised people if the aforementioned three do not make the top six. However, the remaining three spots in the Showdown are less straightforward to predict.

We will start with Jake Dixon. The RAF Regular and Reserves Kawasaki rider made a huge breakthrough last year, as he took his first win in BSB at Knockhill, went on to convert it to a maiden double, went on to make the showdown and finish the championship in sixth place – all in his first full-time campaign in the category. Dixon also made his Grand Prix debut last season at Silverstone, where he replaced Marcel Schrotter at the Dynavolt Intact GP squad in the Moto2 class. For 2018 Dixon will be remaining aboard the RAF Regular and Reserves Kawasaki that propelled him to the front of the pack last year, with the hope that this season it can take him all the way to the top.

The other two prime candidates for this season’s Showdown are the Honda Racing pair of Jason O’Halloran and Dan Linfoot. 2017 proved a tricky campaign for the official Honda squad, with the 2017 Fireblade taking a while to bed in, but nonetheless it eventually powered Linfoot to his first BSB victory in the pouring rain at Silverstone, and then again at Oulton Park a few weeks later. But whilst Linfoot failed to make the Showdown in 2017, O’Halloran did, and finished the championship in fifth place. The dynamic between the pair has been an interesting one since their battle for the win at Snetterton in 2016, and perhaps this year we will see that dynamic go to new levels, perhaps with them fighting each other for the British Championship thanks to the development of the 2017 CBR1000RR SP2.

Of course, these are not the only riders to watch this season, and will not be the only ones to fight at the front. There is plenty of young talent on the grid this year, such Taz Mackenzie, Taylor Mackenzie, Brad Ray and Kyle Ryde, plus newcomers like Gino Rea and others such as Luke Mossey and James Ellison who have just as much of a chance of making the Showdown as any of the riders mentioned. 2018 is going to be a great season for BSB, and it would be a surprise if the six riders mentioned here were the ones who made the Showdown such is the unpredictability, and that is why each and every round, starting with Donington this weekend, is going to be critical to making the cut.