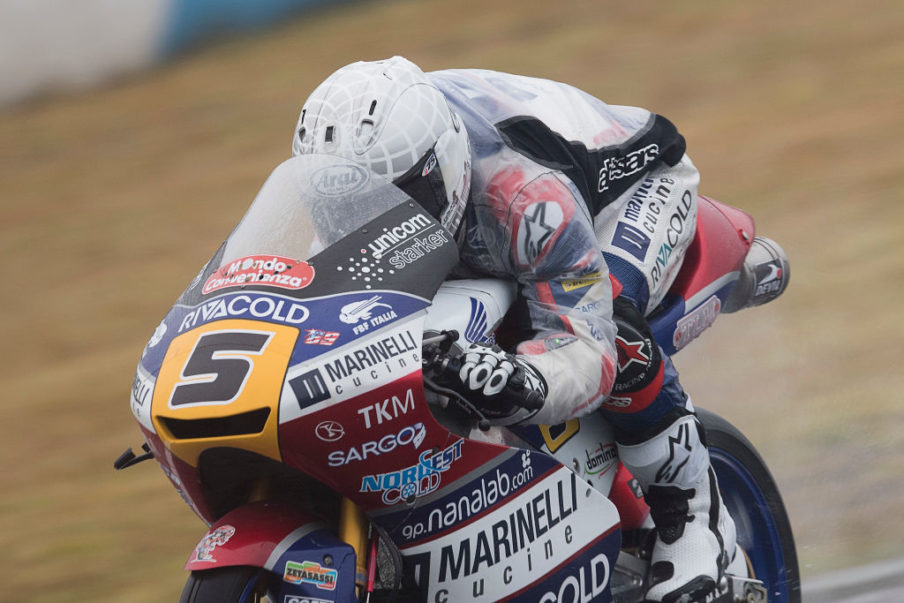 Romano Fenati became the first rider in the Moto3 class to notch up ten victories today, after a sensational performance which left fans, pundits and fellow competitors in awe.

Terrible weather had befallen the riders all weekend, and there was no exception for the race. After a lengthy delay following the morning warm up session, in which Andrea Migno’s KTM machine deposited oil across the track, the riders were finally put under starter’s orders. The race distance was reduced from 20 to 13 laps.

As the lights went out, Fenati (Marinelli Rivacold Snipers) found himself in the midst of a ferocious opening lap scramble with compatriot, and former old sparring partner at the Sky VR|46 team, Nicolo Bulega. It was he who initially had the upper hand during the opening exchange, but on lap 3 was ruthlessly swept aside, as Fenati began to assert his authority on proceedings. Having dispatched one Italian, he was quickly closing down another – Ajo Racing’s Niccolo Antonelli. It did not take long for Fenati to close down the race leader, and very quickly he was passed. Whilst others floundered in the spray, and got caught in the usual midfield shenanigans of the junior class, the Moto3 veteran pulled out an unassailable advantage over the competition. Only in the closing laps, as the weather somehow managed to worsen, did Fenati let up in pace as he safely brought his machine home.

The victory was exactly what Fenati required to keep his dream of winning the 2017 World Championship alive, against his rival and runaway series leader Joan Mir (Leopard Racing). The Spaniard, in complete contrast, endured a truly wretched weekend. Any thoughts of him sealing the championship here took a battering with limited running during Friday practice, compiled with technical problems on Saturday which left him provisionally on the grid in 14th. To make matters worse, he was found to have breached the track limits on his fastest lap, and took a 6-place penalty. Starting from 20th it was always going to be a tough ask to get anything from the race. It turned out, he couldn’t get anything. Treacherous conditions with a bike not set up to his liking, Mir finished outside of the points in P17. He’ll be hoping for much better fortune next time out in Australia.

There was a thrilling duel for the final place on the podium between Japanese rider Tatsuki Suzuki (SIC58 Corse), and Marco Bezzechi (CIP-Mahrinda). The two constantly swapped positions on the track throughout the duration of the race, occasionally trading parts of their machines’ liveries for good measure. This is Moto3, where almost anything goes. Eventually it was Bezzechi who managed to take the spoils, and make it three different manufacturers on the podium too (Honda, KTM and Mahindra respectively).

The likes of John McPhee (British Talent Team), Jakub Kornfeil (Peugeot Saxoprint) and Bo Bendsnyder provided very timely reminders of their abilities, by securing top ten finishes. For McPhee in particular, this was of the utmost importance. With a contract still to be signed for 2018 – either with his current Dorna-backed team or with another outfit – the 23-year old from Oban was desperate to produce a strong performance this weekend, and he delivered, finishing in 10th place among the hard chargers of the class.

However the standout performer of the race was Philip Oettel. From starting down on the grid in 21st place, little could have been realistically expected of him. Throwing caution to the wind, Oettel (Schedl GP Racing) carved and dived his way through the pack – often blasting through a wall of spray, kicked up from the bikes around him – into a brilliant P6. It was a truly thrilling display from the young German, completely showcasing his racing craft to the full. One can only wonder what might have been if he had qualified just a row or two further up the gird.