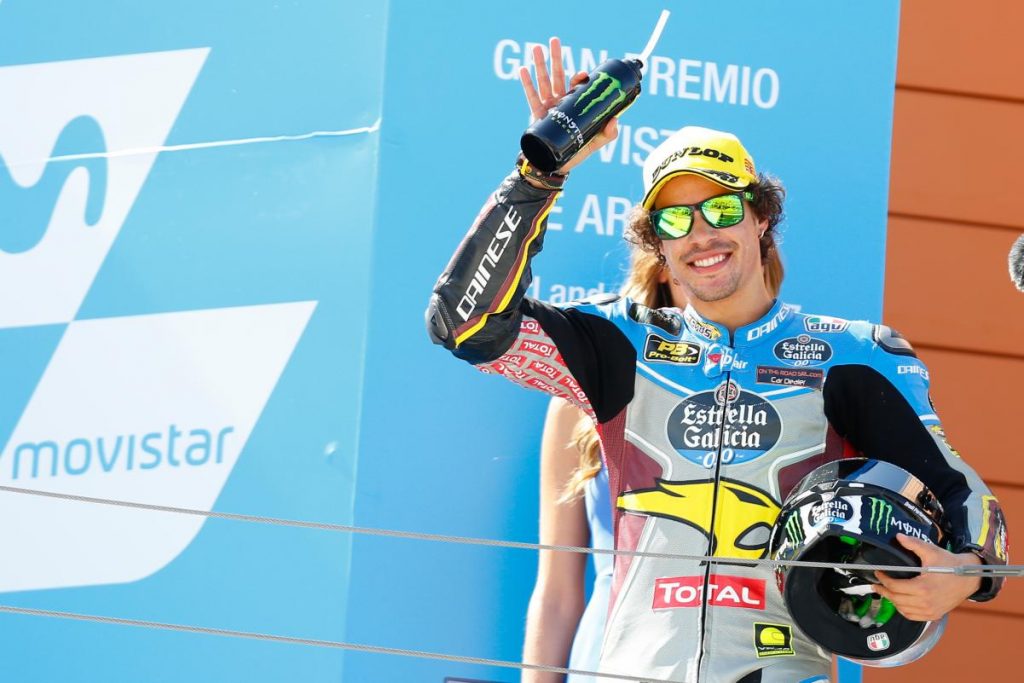 Franco Morbidelli took a scintillating victory in front of a capacity Aragon crowd during the Moto2 race, beating Mattia Pasini in one of the closest races of the season. Portuguese rider and pole-sitter, Miguel Oliveira completed the podium and had there been another lap, he may have even gone better. 2nd place man in the championship, Tom Luthi, took 4th ahead of a courageous Brad Binder, to keep his championship hopes alive.

The race got underway and initially, Oliveira took the lead but Morbidelli wasted no time in making his way to the front. Tom Luthi, who started 7th, was up to third by turn 5, whilst Mattia Pasini headed a returning Alex Marquez.

Morbidelli escaped as Oliveira and Pasini battled, with the Italian getting the upper-hand on this occasion. Alex Marquez also made his way passed the KTM rider, whilst Tom Luthi was only 5th, as he dropped back despite challenging early on. Luthi hadn’t looked like a serious front-runner all weekend.

Talking of dropping back, Alex Marquez was now in 8th place and involved in a tight scrap with German, Sandro Cortese and Japanese rider, Takaaki Nakagami. After Cortese negotiated his way passed the fading Marc VDS rider, Nakagami had a go. Takaaki and Alex clashed at the final corner, both very lucky to stay aboard their Kalex bikes.

Jorge Navarro was having a mega ride, as he duelled with Moto2 hard-man, Simone Corsi. On the ninth lap, he was promoted to top Spanish rider, as Marquez faded back. Alex retired a lap later, complaining of hip pains, stemming from his monster crash during Misano FP1.

At the front, the lead that Morbidelli had built up was being whittled away and soon, Pasini had savaged the 1.9s he had to make up. An audacious move at the end of the straight on lap 13 – after a two failed attempts previously – saw Morbidelli cut back under him but the elder statesman couldn’t fend off the young pretender, who gapped him within the first few corners.

Despite Pasini briefly getting away, Morbidelli reeled him back in and before long, the two Italians were scrapping once more. Championship leader Morbidelli retook the lead on lap 17 and led across the line for the remainder of the race – although Mattia Pasini made it a lot harder than it sounds!

On the final lap, Pasini dived up the inside at turn 5, holding onto the position as Morbidelli tried to cut back and get the drive up the short straight, through turn 6 and into the tight turn 7. Morbidelli set up a pass at the Corkscrew. He set the move up in turn 8 and executed it at turn 9, sitting Pasini up in the process. Despite Pasini’s best efforts, he couldn’t topple Morbidelli, who took his 8th victory of the season. Pasini was a sporting 2nd as the two shook hands – it was Pasini’s third podium of the year.

Miguel Oliveira closed in rapidly on the final lap but couldn’t quite reach the leading two, finishing third to take his sixth podium of the season. Luthi’s race was more damage limitation, as he took 4th ahead of a sensational Brad Binder, who came from 20th on the grid to finish 5th. This was the first time that KTM had both of their Moto2 bikes inside the top 5.

Jorge Navarro remained top Spaniard, taking his joint best finish of the season in 6th, ahead of Simone Corsi, who was again, top Speed Up. Nakagami finished 8th, with Sandro Cortese finishing 9th. Francesco Bagnaia completed the top 10 – the first time that he has finished inside the top 10 across all classes at Aragon.

Quartararo beat Aegerter and Baldassarri, with Vierge and Manzi completing the point scorers. Stefano Manzi finished in a point-scoring placing for a 3rd race in 2017. The Italian has started to come good, as he was 10th when he crashed out at Misano – although he won’t be riding at the VR46 outfit in 2018. Aegerter and Baldassarri could be considered disappointments of the day, as the Swiss won the previous race in Misano and Baldassarri was 7th in the event last year.

The championship now heads to Japan in the Far East and the Motegi circuit. Tom Luthi won the Moto2 race at Motegi in 2014 and 2016, so he has good form at the track, whereas Morbidelli has just the one podium from last season. Alex Marquez also won at the circuit – twice in Moto2, firstly in 2013 but also a year later, in 2014.