Fernando Alonso in IndyCar for 2018?  What was impossible to think a few weeks ago, is getting pretty serious after the Belgian GP.  Now it seems to be, that a year out in the indycar series could be the last chance for the two time world champion to get a competitive car in F1.

Currently these are not just serious weeks for McLaren (article is incoming in the next two days) – but also their star driver is facing a tough few weeks of decisions, probably on the destiny of his career.

After a solid performance for McLaren-Honda in the Hungarian GP back at the end of July, everyone was sure that a extension of the McLaren-contract was only few weeks away.  But now, after the Belgian GP everything looks different.

After more engine problems in Saturday’s Qualifying, everyone thought about points when the Spaniard was running P7 after a tremendously strong start. But again, a few laps into the race the Honda Powerunit showed the poor performance on the long straight.

Alonso got passed car by car on every lap and his radio messages were angrier then ever before. In the end he pulled the car into the garage, after he told the team that he had some engine problems.

The media reported after the race, that he pulled the car into the garage on purpose. Honda said on Monday, that they didn’t find any problems on the power unit. The suspicion gets stronger when you listen to the team radio, before he reported the engine problems – In that team radio Alonso asked engineer Mark Temple if there was any rain coming. After receiving a negation of his question, the Spaniard told the box “engine problem, engine problem”.

Options for Alonso look slim, after Ferrari extended the contracts of both drivers into 2018 for Räikkonen and until 2020 for Vettel, and the extension of Bottas’ Mercedes contract looks as good as safe. Renault’s team boss Cyris Abiteboul indicates that the french team, isn’t currently the right location for the two time world champion. “There is one thing, i don’t want: A frustrating Fernando in a Renault.”

Next to stay with McLaren, who are probably getting forced to hold the Honda engine in 2018, the spanish driver doesn’t have many options. “My market value was never higher”, he told the media after the race on sunday. “I will win next year, no matter where i am”, he told the media before the summer break.”

But what does he mean with that?

Sabbaticalyear from F1 – Going to Indycar?

If we piece the puzzle together, there is one realistic option that is available for Alonso. And this is the Indycar series. Why? Here are some points: 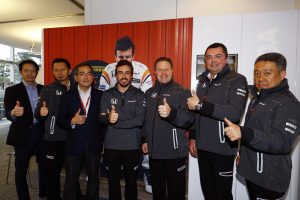 If Alonso will go to the indycar series, he will get the spare place on the Andretti team for sure – the team that he competed alongside McLaren in the indy500 with in May. Andretti is one of the best teams in the series and with Takuma  Sato they have also the current Indy500 winner in the team. Honda also resolved the engine problems that stopped Alonso at this maiden race a few laps before the end – and differently to F1, they have the best engine.

Popularity in the USA

In the whole month of May, starting with his first test with the indycar, Alonso was getting more popular on every event. Hundreds of autographs and fans stood there cheering for the McLaren-Honda-Andretti team from the grandstands. The Spaniard admitted a few days after the race, that he enjoyed the warm welcome to the world of the Indycar series, because he got respect from every side, from the other teams, drivers, fans and media. “Thats different in F1” he said.

With a full season of Indycar, Alonso could attend the Indy500 directly, and with a high chance again with McLaren. He could give the whole story another go – Something he could only try in some years again, if he stays in F1, because the Monaco GP will again collide with the Indy500 in 2018.

The Indy500 showed that Alonso is not only able to impress with an F1 car. The Spaniard in his current form in F1, could possibly let his driving skills shine, in a series where the drivers are most of the time more important than the cars.

The best option for McLaren

For McLaren this scenario would be also a good one providing that they are forced to stick with Honda in 2018. It would be much easier to look at 2018 and give Honda a last chance of building a stronger engine package, without the pressure of staying with Alonso.  A driver replacement for one year could be Jenson Button, for example. Alonso stays with Andretti in the Honda family and could stay in touch with the woking based team.

The most important point is, that Alonso also has the opportunity to come back into F1, probably stronger than he is now. In 2018 he could also wait and see if Honda (if they will stay with McLaren) get their problems solved – if now, he could use other options. The contract from Lewis Hamilton expires at the end of 2018 and also Renaults goal is, to be fighting for victories and the championship in 2019. The two time world champion could see the whole evolution of the driver market from a relaxed point of view from the USA and decide than what he wants, without risking another year of driving in the midfield.

It will be another cracking decision at McLaren in the weeks to come. We will have to wait and see!