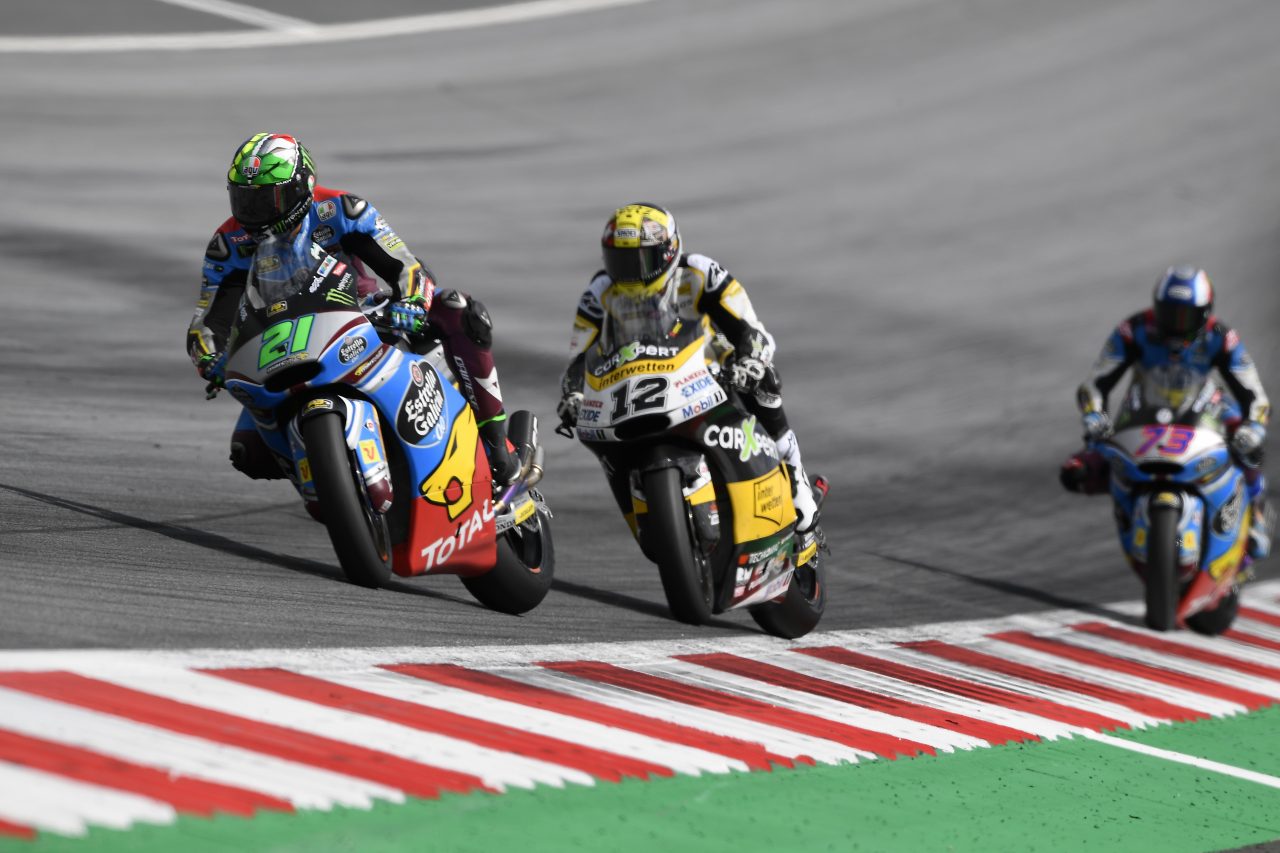 The championship battle in the intermediate class has properly begun to heat up as the Grand Prix circus heads to Silverstone in Northamptonshire this weekend.

Having looked almost like running away with the championship just a few rounds ago, championship leader Franco Morbidelli has seen his lead in the standings slowly diminish to his rivals. Admittedly, the MarcVDS rider has a 26 point buffer to his chief rival, Interwetten’s Thomas Luthi but the Swiss has once again shown himself to be one of the most consistent competitors – scoring points at ten of the eleven championship rounds so far – including victory at Brno three weeks ago. How far Luthi can push Morbidelli for the title will be fascinating both this season and beyond – the pair will be team-mates next season at MarcVDS-Honda in MotoGP.

Whilst it is still mathematically possible for Morbidelli’s current team-mate, Alex Marquez to take the Moto2 crown, it is looking practically ever more unlikely. With 153 points, the Spaniard will need a miracle to overhaul the deficit. Race wins are now the priority and after Friday’s practice sessions at Silverstone, he looks set to be targeting just that – finishing the day as the fastest man in the Moto2 field. With his team-mate departing for the premier class in 2018, the time has come for Marquez to lay down a marker for next season as the man to beat on a 600cc prototype machine.

Another rider who will be targeting podiums and victories during the latter part of this season is KTM’s Miguel Oliveira. The former Moto3 winner has had a superb maiden season with Aki Ajo’s factory supported team, notching up five podium finishes so far. The team entered the class at the start of this season with the ambition of emulating their successes from the junior category and so far, they’re not doing bad. Olivera’s reputation has grown considerably this season, leading to expectations from many onlookers that the Portuguese rider will – sooner rather than later – progress to the MotoGP paddock with the Austrian team. A victory here at Silverstone would further strengthen his claim to a place in the premier class and seek to be Portugal’s greatest motorcycle racer.

As it’s the British Grand Prix, the Moto2 class is the recipient of a wildcard entrant. None other than the flamboyant British Superbike race winner, Jake Dixon, who is swapping his RAF Regular and Reserves Kawasaki machine for a ride with the Dynavolt-Intact team, alongside Sandro Cortese. His appearance means British fans now have two native riders to cheer on Sunday, with fellow compatriot (and regular Moto2 entrant) Tarran MacKenzie riding for Kiefer Racing. There is much hope for a good result from the young Brit this weekend, as he gets the chance to race at a circuit he’s already familiar with. With both riders coming from the British series, it highlights just how competitive and strong our domestic championship is.