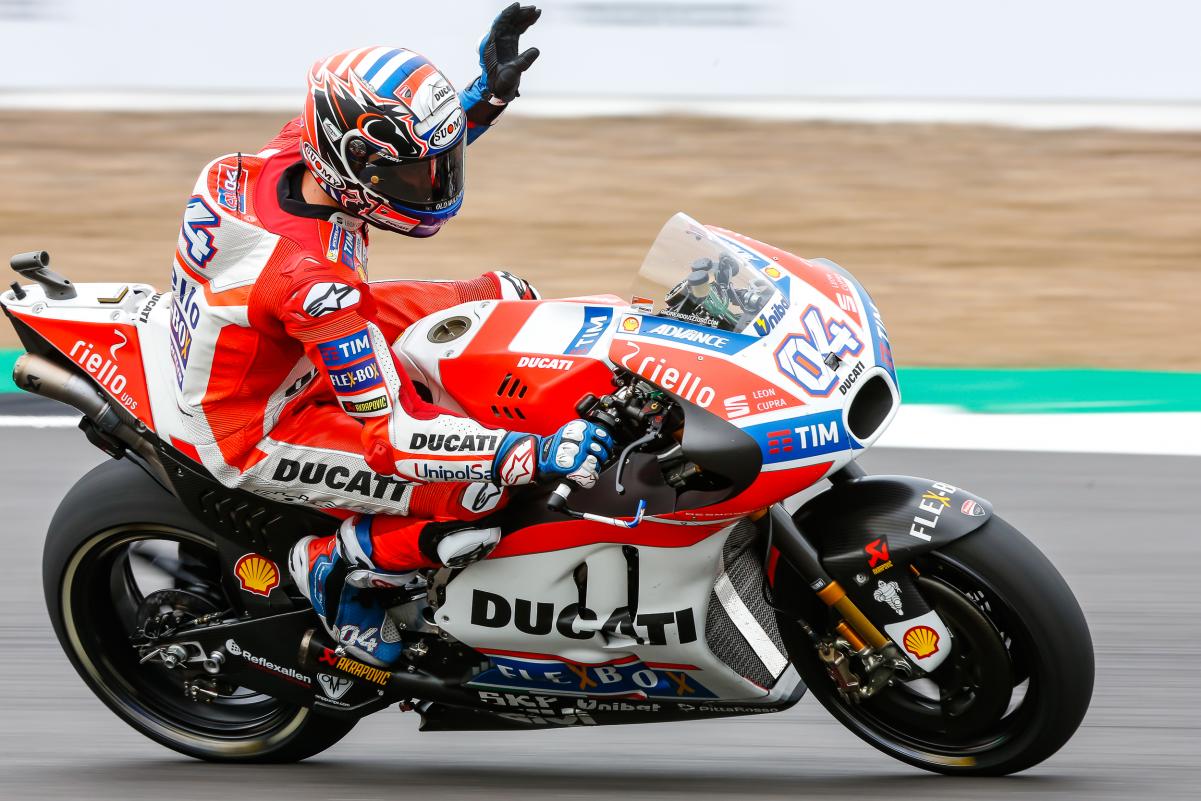 Andrea Dovizioso has taken his fourth win of the 2017 MotoGP season in a scintillating British Grand Prix at Silverstone, which saw Cal Crutchlow finish fourth, Valentino Rossi lead for the majority of the race and Marc Marquez retire with a suspected engine failure.

Into turn one on the first lap, Valentino Rossi led and instantly pulled away from the chasing pack. Marc Marquez and Cal Crutchlow were in behind, whilst Dovi and Maverick Vinales battled it out over fourth and fifth. Jorge Lorenzo was also a fast starter, occupying sixth.

By the end of the first two laps, Rossi had a lead of over a second. Whilst Vinales was able to get to second, he was only able to close Valentino down in the final sector, with the gap hovering at around 0.8 seconds.

With seven laps to go, Valentino Rossi had been virtually caught by the chasing quartet which consisted of Dovizioso, Marquez, Vinales and home-hero, Cal Crutchlow. However, approaching Stowe corner, Marc Marquez suffered a suspected engine failure as a cloud of smoke billowed from the factory Honda. A rare occasion to see a HRC machine blow up, with one other notable incident being in 1998, in World Superbikes with Aaron Slight suffering similar fate in the closing stages at Monza.

Dovizioso moved through to take the lead at Stowe with three laps to go. Rossi initially trying to fight with his fellow countryman but having to settle for 2nd. Then, later in the lap, Maverick Vinales powered ahead his 38-year-old teammate going into Brooklands.

Despite the Yamaha duo’s best efforts, they were forced to stay as they were as Ducati’s Andrea Dovizioso took his second consecutive victory, his fourth of the year. Vinales and Rossi completed the podium with Crutchlow fourth. It was Valentino Rossi’s 300th premier class start and he celebrated it with his 190th premier class podium. Dovizioso gave Ducati their 37th victory in MotoGP.

The Italian now leads the series as MotoGP heads to Ducati’s backyard at Misano, some 85 miles away from the manufacturer’s home city of Bologna. Valentino Rossi also heads home, as the nine-time champion lives just 10 miles away from the Misano circuit.