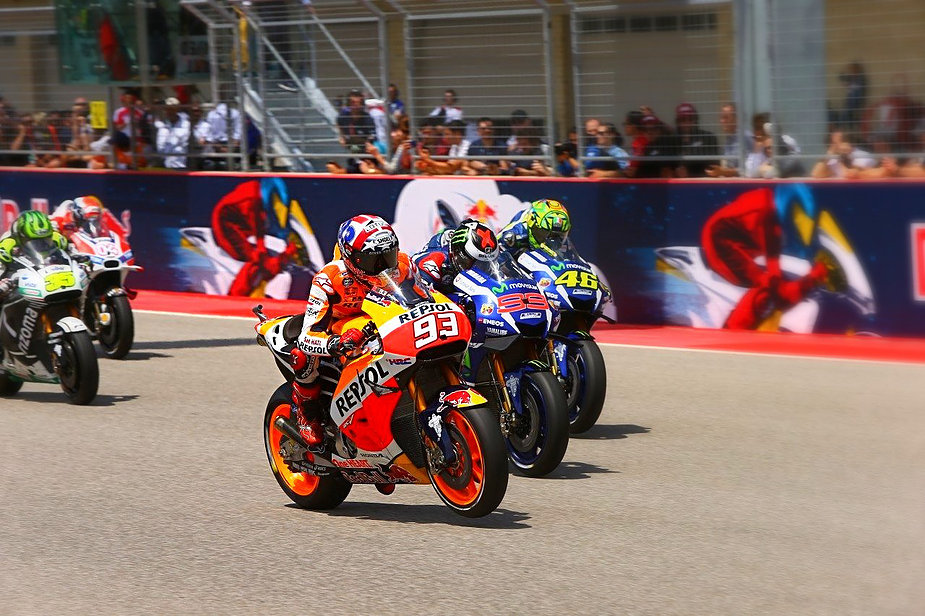 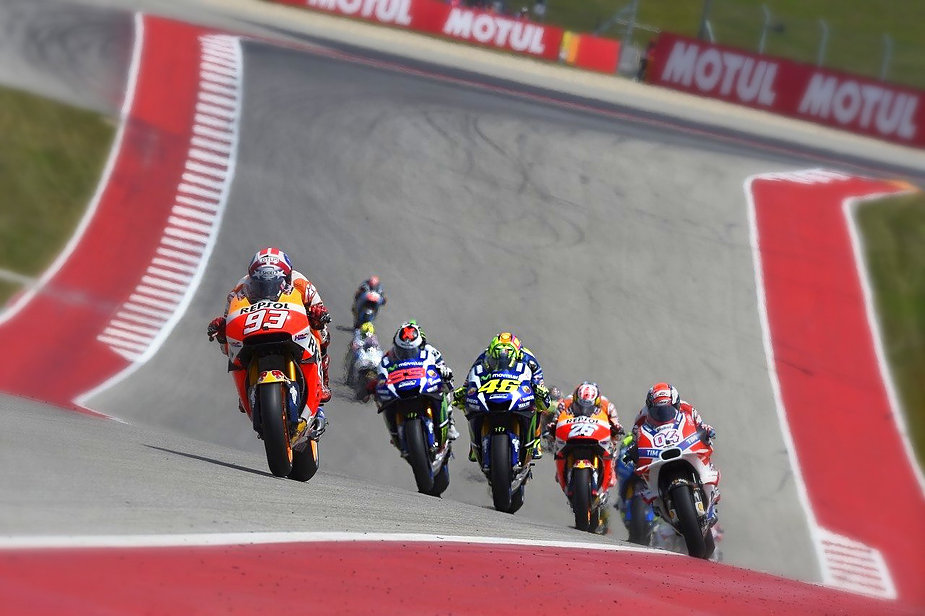 After two eventful opening races of the season, the MotoGP circus parades up to Texas, for the Americas Grand Prix at the Circuit of the Americas (COTA). Although having only been on the calendar since 2013, the premier class has been dominated by Marc Marquez – however, the five-time champion languishes in the championship, with just a 4th to his name so far. Can all that be changed in the states?

Although we normally start our previews with the championship leader, we have to start this one with Captain America himself. Marc Marquez has won at COTA ever since it joined the calendar in 2013. He dominated proceedings last season whilst in 2015, he did have to scrap a bit with Rossi and Dovizioso. The stop-start hard breaking and tight turning obviously suits his style but unfortunately, that may not suit the Honda’s style. Marc’s form is a little bit left to be desired in 2017. A 4th and a crash out of the lead is not what he had in mind to start his title defence but he will be hoping to continue his domination around what has become his territory on the MotoGP calendar.

Maverick Vinales will be looking to become the first Yamaha rider since Kenny Roberts Snr in 1980 to win the opening three races of the year and the first Yamaha rider to win at the new venue. Vinales hasn’t finished outside the top 10 since coming to the track with the premier class, with 4th last year and 9th the year before. In 2014, he won his first Moto2 race and was 2nd in the first ever Moto3 race in 2013. Now he is on a winning bike and in good form, it may well be time to break Marc Marquez’ stranglehold on the circuit and take the honours for Yamaha. If he or Rossi take a victory at COTA, it will be Yamaha’s 500th in Grand Prix.

Valentino Rossi comes to the United States of America in the same championship position as last year. 2nd in the world currently, the nine time champion will be looking to settle a score with what is statistically his worst circuit on the calendar. No win and just one podium hardly make for a Valentino Rossi love story in Austin. The scene was the start of his championship title unravelling last season when he crashed out and in 2014, 8th was all he could manage. Valentino hasn’t won in America since Indianapolis in 2008. There was a hurricane that day and I certainly wouldn’t put it past The Doctor causing a storm on Sunday. He’s come through the field twice already this year, so can it be lucky number three?

Despite being wiped out in Argentina for the second consecutive season, Andrea Dovizioso comes into the Americas GP in third. The Ducati rider struggled in Argentina, finding himself in 13th on the grid. He was in 8th before he was unceremoniously helped to the floor by Aleix Espargaro. The Italian may not be looking forward to COTA given recent experiences. He was taken out at the first turn by Dani Pedrosa last year, although the season before, he was 2nd and in 2014, he was 3rd. With a 30 point gap to series leader Vinales, a win would be needed for the Ducati team, who have done anything but shine this season. Ducati haven’t won in America since Casey Stoner at Laguna Seca in 2007 and that is one drought that the team will want to end.

In 4th position, Britain’s Scott Redding will be hoping for another top 10 finish. The Ducati rider has finished every race since Catalunya last year, although three of them were 0-point finishes. Redding was 6th in the Americas Grand Prix last year, meaning it was the first time that he had finished in the points at the track. There is also a psychological advantage to Redding, who is beating his teammate Petrucci, despite the Italian being on the Factory bike. The 24-year-old Brit will be hoping for his momentum to continue in the USA.

Completing the top five is fellow Brit and double winner from 2016, Cal Crutchlow. The Brit took a stunning third place in Argentina to kick-start his season following a point-less Qatar. Crutchlow’s form in the Americas GP has been mixed, with 17th last year after a crash but a 7th in 2015 remains his best result on the Honda. However, it was 2013 where Cal got his best result at the track, with 4th. In 2014, he crashed at the fast turn two, suffering horrible hand injuries which hampered him for the first part of the season. Cal sits as top Honda in the championship and will be gunning for a top five at the very least. Who’s to say a podium would be too much to ask?

Rookie Jonas Folger is the rider who occupies 6th place in the championship. The Tech 3 Yamaha rider has rode well so far in 2017, with two top-10 placings from his first two races. Folger’s best result at COTA remains a 4th in 2013 on a Kalex KTM, although last year he was 5th in Moto2. With a Tech 3 Yamaha that is obviously handling very sweetly, Folger may well be able to gel with the track on a big 1000cc bike. The last German rider to get a podium was Stefan Bradl in 2013 at Laguna Seca. Can the drought be ended in Texas?

Jack Miller is 7th in the championship and the 2nd Honda. The Australian winner from last season has had a consistent start to 2017, with an 8th and 9th in Qatar and Argentina respectively. He didn’t start in the race last year but was 14th in 2015 and won the Moto3 race in 2014. The last Australian to win in the USA was Casey Stoner in 2007 at Laguna Seca, something that Miller will want to put right, even if the odds may not be in his favour. Don’t put it past him to put in another sterling effort for a top-10 finish.

Keep your eyes on Alvaro Bautista this weekend, after an incredible ride in Argentina to finish 4th. The Spaniard has some tricky form at the track, with an 11th and 15th in 2016 and 2015 respectively, both on the Aprilia. He crashed in 2014 but was 8th when the paddock came for the first time. His 4th place in Argentina was the first time since Le Mans in 2014 that he had a top five result. He hasn’t had back to back top five finishes since Motegi and Valencia in 2013 and he has never had back to back 4th place finishes. Will he continue this stunning run of good form?

Other names include Andrea Iannone, who was somewhat unfairly penalised for apparently causing Jorge Lorenzo to crash at Argentina. Anyone blessed with eyesight could tell you that Lorenzo most certainly rode up the back of the Italian. Jorge Lorenzo is another big name who is languishing in the championship, in 18th with just five points to his name. A track he has never won at and with just two podiums to his name at COTA, it’s hardly likely we will see Jorge shine this weekend. But give him time.

Johann Zarco got points on the board in Argentina, finishing a solid 5th. The Frenchman is 11th in the championship, behind Dani Pedrosa, who also sits on 11 points. Aleix Espargaro will be hoping to bounce back from his Argentina mistake with another top six. Danilo Petrucci missed the Americas GP last year but will be hungry to return to the track and get more points on the table after finishing 7th in Argentina.

Loris Baz and Hector Barbera will be hoping for some big improvements to come their way to challenge for the top 10 once more, whilst fellow Ducati rider Karel Abraham is going to be hoping to be upset the front runners again, with another solid qualifying position – like in Argentina.

The other two rookies – Sam Lowes and Alex Rins – are going to be looking to challenge for the points again. Rins’ fractured ankle will not be making his life pleasant whilst Lowes will be in search of his first points in the premier class at COTA, a track he has won at in Moto2.

Both KTMs scored points at Termas and if they can do the same again in Texas then we know that they have got massive potential for the rest of the season. Tito Rabat’s double point scoring rides in the opening two races will be propelling the Spaniard in his challenge for a top 10.