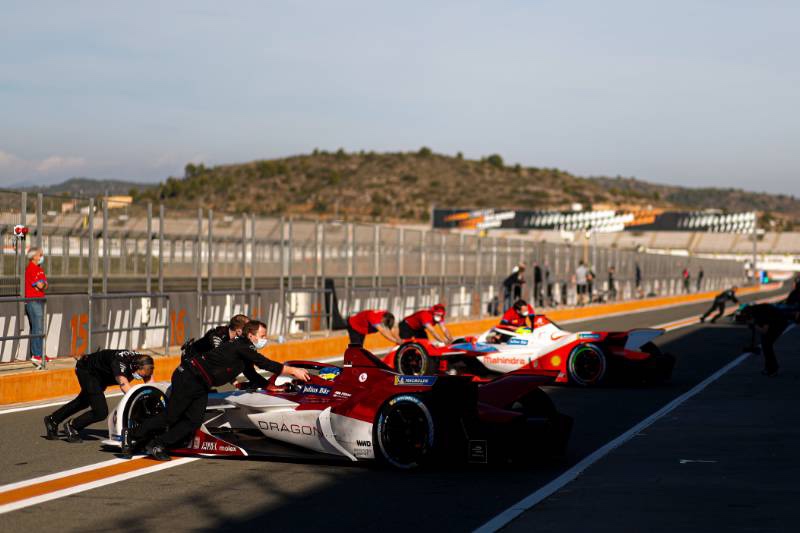 Earlier this week saw the return of Formula E, as the teams took to the Ricardo Tormo Circuit in Valencia to test their cars ahead of the 2020/21 Season. BMWi Andretti’s Maximilian Guenther was the quickest of all over one lap, but what can we actually learn from Formula E testing? Let’s find out!

Last year, the Ricardo Tormo circuit implemented a tight chicane into the first corner, in order to try and replicate some of the characteristics of Formula E’s famous (or infamous) street circuits. This year, though, that was removed in an attempt to minimise the risk of the cars sustaining damage. That wasn’t the only change either. Due to the somewhat creative interpretations of where the track limit was last year, it was decided that this year they would monitor it using sensors. The increased awareness of track limits also helped with the batteries’ operating temperatures. Unfortunately, because of all the changes to the track, comparing times with last year would not give an accurate representation of how the technology has developed since then.

Every year the quality of the Formula E Grid seems to get better and better and this year is no different. The new faces this year, Venturi’s Norman Nato, Andretti’s Jake Dennis, and Virgin’s Nick Cassidy, sprinted out of the starting blocks, posting competitive times almost immediately. By the end of testing, their quickest laps were all within 4 tenths of the overall fastest, Max Guenther, with Cassidy and Nato both quicker than their more experienced teammates.

It’s fair to say NIO have struggled to be competitive in recent years, often being the slowest car on the grid. However, that seems to have changed this year, as an all-new powertrain helped Oliver Turvey finish testing 10th quickest. NIO also completed the most laps of anyone with a total 535 across all three days; valuable data to help get to grips with the new system. As spectators, we can but hope that the clear improvement in one-lap pace, also means an improvement to their long run pace.

As Tight As Ever:

One of the best things about Formula E is the closeness of the racing, and this year it’s set to be the closest field ever. At the end of testing, all the drivers were covered by a little over half a second. The young Max Guenther lead the pack, but Audi’s Lucas Di Grassi brought up the rear just a mere 0.578 seconds behind. Audi themselves seemed to be a tad behind the others, perhaps as a result of their decision to pull out of the all electric series after this season, so that they can focus on Le Mans. With a field covered by so little, however, this season is going to be as close as ever. Any championship hopefuls will need to be incredibly consistent.

So now that testing has concluded, we have learned many things about what to expect in this coming season. NIO look like they can be competitive again, and anybody can win any race. We look destined to witness one of the best seasons of Formula E to date: you won’t want to miss it when it kicks off in Santiago on January 16th.

With live coverage finally in our neck of the woods, available on YouTube rather than a suspect stream, there’s every reason to be watching Super Formula this season. And if today’s first round at Suzuka, one of the all-time great Grand Prix circuits, was anything to go by, with Nick Cassidy storming through the field to win and attrition aplenty, it’ll be worth getting into.

The race started with Tadasuke Makino, formerly of F2, cementing his lead ahead of the battling Alex Palou. The opening laps remained fairly static, with few successful moves until Lap 7, when Cassidy, who qualified 12th, pitted for soft tyres. This would turn out to be a masterstroke, as only a few laps later, both 18 year old debutant Tristan Charpentier and stalwart Ryo Hirakawa went off at 130R and into the barriers, bringing out the first safety car.

This was where the madness kicked in. Palou, who had been straining to get past Makino at the start, was slapped with a drive-through penalty and served it just before the Safety Car was deployed, but the field bunching up did alleviate some of the damage. Dan Ticktum was slow to get into his pit box due to his Mugen team double-stacking, and a mechanic even acrobatically jumped over Cassidy’s car to change the wheels as quickly as possible.

Yuhi Sekiguchi’s car appeared to momentarily stop in the pitlane before he was able to get it going, but a lap later he pulled back into the pits and became the third of what would turn out to be a long list of retirees. Meanwhile, Cassidy was on the charge, his perfectly-timed pitstop jumping him up into 5th before he dispatched first Makino then Yuji Kunimoto to place himself 3rd. Shortly after, the safety car was out again: Kazuki Nakajima beached his TOM’S Toyota into the Degner 1 gravel, with a distracted Harrison Newey then following him into retirement at Degner 2.

Five retirements within 15 laps just signals the frantic drama Super Formula is good for, and a second safety car three laps later when Hiroaki Ishiura pulled into the pits and Palou’s machine gave up on him only furthered that point. From then on, Cassidy was into a prime position to win a race which looked for all the world yesterday evening to be an exercise in damage limitation. Kamui Kobayashi, the on-track leader, would have to pit again to use a different compound.

A third safety car was brought out this time by Makino, who’s car suffered a right-rear wheel nut failure and sent him into the gravel beside the run up to 130R. Makino would prove, finally, to be the last of the retirements, but there were still twists and turns up the road with Kobayashi trying to find the perfect slot to pit in, Cassidy managing to keep within arms’ reach, and the others jostling for podium/lower positions. Ticktum began to fall down the field, his airbox lighting glowing red (this signals a lack of attack mode – versus green for full, and blue for halfway used) and tyres appearing to be spent.

The final laps proved to be the killer for Kobayashi’s hopes of a strong finish. The late Safety Cars prevented the ex-Sauber F1 driver from banking a good result on a happy hunting ground for him, finishing tenth. Cassidy took the on-track lead on the final lap, and Kenta Yamashita was kept at bay in the end by Naoki Yamamoto, last season’s title winner. Cassidy lost that title by a point, but already, he’s taken first blood and cemented a troubling marker for his rivals.