The action on track was red hot last season, and most of the drama played out on some of the best tracks in the world. I’ve made a short list of my favourite tracks WorldSBK will be visiting this year, and a couple of reasons why I think so, and also who I will be tipping to take the win this year. What are your favourite tracks? We would love to hear via our social media channels.

A staple on the WorldSBK calendar for many years, Donington Park is one of the classic British race tracks, also one of the oldest, being in operation since the 1930’s. It always produces close racing, with its mix of long sweeping corners, changes in elevation and also a handful of sharp, hard braking corners. It was also home to the British round of MotoGP, until being moved to Silverstone where it is currently held.

Jonathan Rea had a nightmare of a round last season, going off-road down the Craner Curves and crashing out later on. Toprak Razgatlioglu took full advantage of Rea’s misfortune, and scooped the race 1 win. I have a feeling Rea will be looking for retribution this year, and hopefully Kawasaki will have addressed the problems which plagued Rea last season, especially the nervous front end of the ZX10-RR. Rea however, will have his hands full keeping both the Yamaha’s and Ducati’s at bay.

Another classic track, and one which many of the riders like. A fast, flowing track, with plenty of high speed sweeping corners, and also providing one of the best atmospheres, with the Dutch fans providing loads of noisy support. Toprak was unfortunately rammed into by Garrett Gerloff last year, sending the Turkish rider down, who was understandably furious after the race. And as Toprak had done in Donington, it was the turn of Rea to gladly snap up the win in race 1, going on to claim a clean sweep of wins in Assen.

It is a track which definitely suits the agile, smooth turning attributes of the Yamaha, and Toprak will no doubt be keen to right the wrong afflicted to him last season.

If a track regularly gets described as a “rollercoaster” even someone who has no interest in racing will have some idea of what is meant. The architect who came up with the plans for Portimao, one Ricardo Pina, is an absolute genius. One of the most exciting, and dramatic race tracks ever constructed, Portimao has it all. Changes in elevation and camber, fast sweeping corners, entries into blind corners, and bikes flying over the tops of hills. Something the Australian Jack Miller demonstrated for us all, as he “bunny hoped” his MotoGP Ducati over the crest of one of the most scary corners on the track last season in MotoGP.

Jonathan Rea had a terrifying crash into one of the fastest corners last season, and amazingly was able to walk away unhurt. It provided a great race however, and was voted by Eurosport as the race of the season. Toprak was the man for the occasion and scooped the win for race 1. Scott Redding kept the Yamaha rider honest for much of the race, and the Ducati definitely had the pace to match the Yamaha over the sweeping corners.

I can see Toprak taking the win again this coming season, with perhaps pressure from Alvaro Bautista on the Ducati, or maybe from one of the young guns on the Honda, Iker Lecuona maybe?

With no racing in Australia for the past two years due to the Covid pandemic, everyone including fans will be desperate to see a return of racing to this iconic race track. No exact dates have yet been decided, but we hope we’ll see racing there some time in late November.

Another track with high speed, sweeping corners and dramatic vistas, Phillip Island has been the scene of some of the best motorcycle races of all time. Alvaro Bautista had an amazing start to his WorldSBK career back in 2019, and really lay down the challenge to the reigning champion, Jonathan Rea. Alvaro on the Ducati was really quick that season, and secured a couple of impressive wins early on in the season, including here at Phillip Island.

I think being reunited with the Ducati this season will be really good for Alvaro, and I can see him claiming a win here at Phillip Island, using all the power, and top end speed of the Ducati.

All in all, this is hopefully going to be another exciting and dramatic season of racing, and we cannot wait for the season opener in Aragon in April.

Get in touch with us, and let us know what you think will be the most exciting races in 2022. 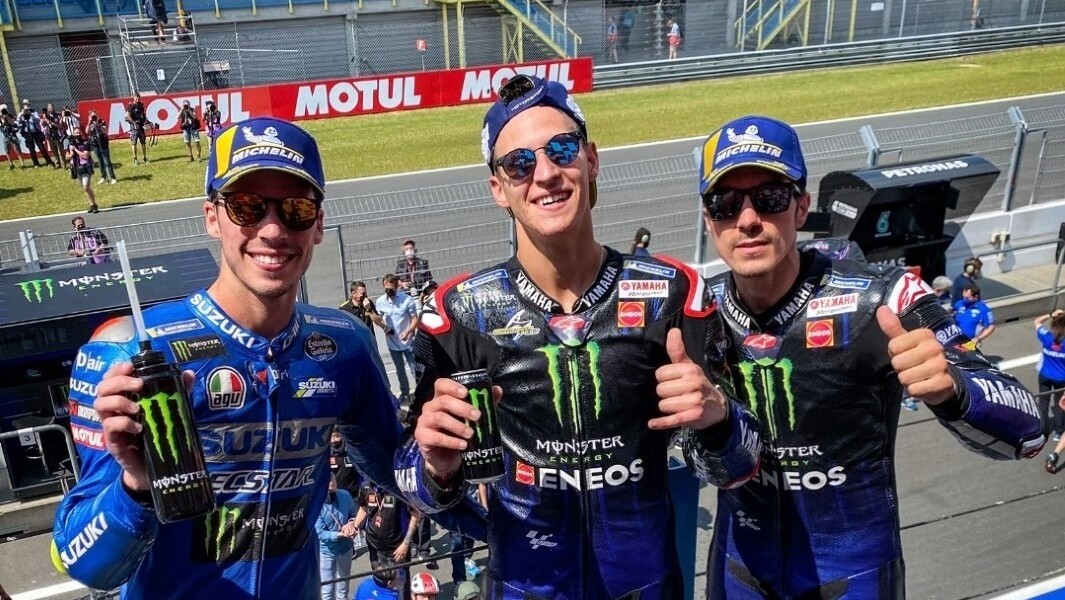 At the newly resurfaced Assen track the Yamahas were flying high. Maverick Vinales (Yamaha) claimed pole position and took the new lap record (1:31.814) in the process.

Both Vinales and Fabio Quartararo (Yamaha) were on the front row in first and second. With a surprise 3rd from Francesco Bagnaia (Ducati) and Takaaki Nakagami (Honda) taking fourth.

While the factory boys were settled on the front row Franko Morbidelli (Yamaha) was not to compete in the qualifying or the race as he had again injured his knee and would need to undergo surgery for it. Stepping into his shoes was Garrett Gerloff from World Superbikes.

During Friday’s practice, last weekend’s race winner – Marc Marquez had a mechanical failure which saw him propelled from his Repsol Honda. The Spaniard succumbed to no further injuries and was cleared to race on Sunday. But, his qualifying result would make it hard to compete, starting from 20th on the grid.

With 26 laps at the Dutch circuit and clear conditions, it looked like it would be a Yamaha victory for sure. But which Yamaha rider was going to step onto the top step of the podium?

Vinales took an interesting approach, being the only rider who chose to have a soft front tyre. All the other riders lined up on the grid with either medium or hard. As the lights went out Vinales was swamped. He had gone from pole to 5th, whilst his teammate went to first from 2nd.

Vinales knew he needed to make a good start to fight for the win. He soon passed Alex Rins (Suzuki) for 4th place, putting him behind Nakagami and Bagnaia. A tussle soon broke out between Fabio and Pecco for 1st . Bagnaia eventually took the lead.

The Ducati lead the race, all the while with Quartararo watching, waiting for the right time to pounce – taking fastest lap in the process.

The fastest lap and the new lap record soon were beaten by Johann Zarco (Ducati), in 5th place.

Bagnaia struggled to get any gap from Quartararo and on lap 6, turn 11 – Quartararo took the lead. Straight away he broke away from the pack with 20 laps to go. The space was soon 0.575 seconds. He then gained fastest lap and with the clean air in front of him furthered his lead to 0.900 seconds.

It was unfortunately an early race finish for Valentino Rossi (Yamaha) who crashed out turn 7, lap 8.

Beating his own fastest lap, Quartararo kept pushing himself and pumped out quicker and quicker laps. Trying to gain an advantage over Bagnaia, who was now in a race of his own too with a gap of 1.336 seconds to Quartararo and 0.506 seconds to Nakagami behind him.

Starting from 20th on the grid Marc Marquez rode a very impressive race and by lap 10 he had secured 10th place. Due to it’s many right-hand corners, Assen was never going to be a track that would favour the Honda or Marc’s injured arm.

Nakagami’s Honda soon caught up to Bagnaia’s Ducati, they tussled for 2nd place and during this Bagnaia received a track limit warning. The gap increased between them and Quartararo to 2.941 seconds. They continued to fight for the podium place, letting Fabio increase his lead further to 3.272 seconds, just over the half-way point in the race.

On lap 14 Bagnaia’s warning turned into a long-lap penalty for continuing to exceed track limits. He decided to take this on the next lap, rejoining the race in 7th place.

Meanwhile, Nakagami had a terrible time and suddenly ended up in 6th place, getting passed by 3 riders. His luck went from bad to worse and soon he was in 9th place, behind Marquez and Aleix Espargaro (Aprilia). To further add to his torment he also received a track limit warning.

Jack Miller’s weekend wasn’t going well for him either and he crashed, turn 15. He managed to rejoin the race, but later his Ducati had mechanical issues and was told to retire.

The gap between the top two Yamaha’s had reached over 4 seconds and there was no chance that Vinales could catch Quartararo. There was however battles behind them, between Joan Mir (Suzuki) and Zarco for 3rd place and M.Marquez and A.Espargaro for 7th.

Lap 20 saw Iker Lecuona (KTM) crash in the final chicane, leaving his bike floundering on the track. The marshals were quick to respond though.

The few fans present at the track were seeing a masterclass race by the young championship leader. Even though the gap between him and Vinales had reduced, with 7 laps to go Fabio was on for his fourth race win of the season. The reigning world champion was in 3rd place having started from 10th on the grid.

Mir, Zarco and Miguel Oliveira (KTM) had created their own group and fought for that last podium spot with Bagnaia, Marquez and Espargaro behind them. Marquez looked set to pass Bagnaia but it was a surprise pass by Aleix that took him to 7th in-front of Marc.

The final lap: Quartararo comfortably secured 25 more precious championship points, ahead of a dejected Vinales and an elated Mir (who took his third podium this year).

Going into a 5 week summer break, the Yamaha’s seem unbeatable and yet there is speculation within the Vinales team that he may choose to leave them. Can this break re-kindle their relationship? Or will there be a breaking news story in the meantime? Join Moto GP for more action on Sunday 8th August.