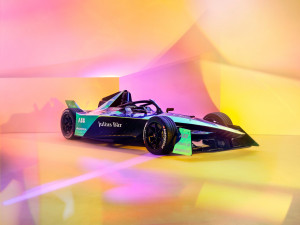 Gen goes Green! Expect the phrase in a few weeks! The first day of the 2022/23 test at Ricardo Tormo went ahead today and the machinery is fantastic! The previous generation had a maximum of 250kw but they now have a further 100 with 350  at their disposal.

Wehrlein now an experienced driver in the field was quickest out the blocks early on in the Porsche, with a 1:27:492.
We have the introduction of Maserati and Mclaren, the latter who took over the defending Champions Mercedes with big boots to fill. Jake Hughes fits in and the Papaya orange was perfect especially in Spain.

Rowland hopes to have a better string of results especially with Di Grassi alongside in this Season’s battle, and laid down an early gauntlet for the field with a 1:26:351 which was seven tenths quicker than anyone else before Max Guenther joined him in the 1:26’s too, but still 0.559 away from the time. A few yellow flags with a spin or two but only one real flag of concern early on when Cassidy’s Envision got stuck in the gravel at turn six which brought the session to a brief stoppage. DS Penske duo paired with reigning drivers champion Vandoorne not Da Costa continue to look strong early on being within the top 5 as the track gripped up Stoffel went 0.322 behind Rowland.

Abt name is back in the sport with Cupra, and just getting mileage in the morning session, this was held by Mueller being unable to get out early on but he eventually did manage to get out alongside Frijns both lapping in the low 1:28’s, at the back of the field and further interrupted late on in the session with Mitch Evans spinning at T5, causing a red flag for 10 minutes. We had 18 of the 22 drivers before lunch on track and Jake Hughes in Mclaren finally toppled Rowland’s impressive lap to a 1:26:178 with Guenther after in Maserati a 1:26:096, the new teams wanting to take the headlines at lunch. The second Maserati in P4 whilst Rast must’ve been focusing on long runs in P20. The Top 10 covered by 1.050.

The second session went green at 14:00 hours and Guenther who went straight to top carrying on where he left off with a 1:26:852 amongst eight others. Sam Bird who failed to win in last year for the first time in a full Season looks to build slowly after sustaining a wrist fracture missing the Seoul double finale he  had a fairly quiet morning, and was one of those who  just looked to continue to plow away, getting the data for Jaguar. One that also jumped out of the blocks was Jake Dennis with Andretti only P17 in the morning, who improved on his time by three tenths to be P2 after the first rush of action.

Guenther improved to a 1:26:221 as they came to an hour in the afternoon running whilst Porsche hot on the heels, another team with a switch Wehrlein under a tenth but Antonio Felix Da Costa making it P2 and P3 for the team. Porsche with that line up look to see better than P7 in the final standings. Continous action, only a brief yellow as Mortara’s Maserati coming to a stop, a quick reset let it go on its way, as the times begin to fall, the top five now being in the 1:26’s with Mortara being one of them. Jake Hughes brought the afternoon to an abrupt end for 20 minutes as the NEOM Mclaren came to a stop, and failed to restart.

The teams had 90 minutes remaining of Day One Norman Nato joined the track for the first time but only a sightseer, Buemi still yet to be seen in the afternoon. The top twelve all within a second of Guenther, with eight different teams.

With under an hour the drizzle threat began to become into play, and the track became damp, so the fastest times of the day were not going to be touched but it is interesting information for these new Hankook tyres, Michelin being the supplier since the inaugural season in 2014.
No spins in the rain happened to cause any  flags showing the true skill of the drivers at hand. The running was interrupted further with further teething problems on reliability as Sette Camara’s NIO halted between T5 and T6. Ticktum currently in the top 10 ahead of his Brazilian team-mate in the sister car.

The track returned to green flag running under dark clouds and damp track so it continued to be a reliability test and data collection for the teams rather than outright speed. A really wet track with 20 minutes remained so Guenther would take plaudits for being fastest in both the morning and afternoon session before the rain came. Porsche and DS Penske as duos looked solid, whilst Nissan had a difficult day in at the back on average being 1.6 off the pace across both sessions. Buemi seemingly had a reliability issue as no time was set in the afternoon.

A full qualifying and race exercise is due to happen in Valencia tomorrow before they a further day of testing on Thursday, so some gremlins found, and much running done today.