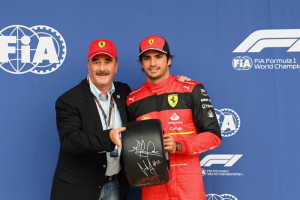 Image courtesy of Pirelli Motorsports Carlos Sainz took his fist ever pole position in F1 on Saturday afternoon in an action packed qualifying in Silverstone. Wet weather showed up to no ones surprise for qualifying and it meant that driver skill would decide pole position. Sainz excelled throughout the qualifying and was fastest on track when it mattered in Q3, landing his first pole position ever, in F1.

Ferrari would be pleased with their qualifying overall after Sainz pole and Leclerc slotting in  at P3. The Monegasque driver made a mistake towards the end of Q3 and it cost him a shot at pole but he still remains in contention for the race win starting from 3rd place. Championship leader Max Verstappen could not improve on his final lap in Q3 but is still well placed at P2 for the race. His teammate Sergio Perez will be starting at P4 alongside Leclerc.

Lewis Hamilton in the Mercedes was also impressive throughout the qualifying but could not match the pace of the front runners and ended up at P5. His teammate Russell could not match his pace and was only fast enough for P8. Both the Mercedes cars were hopeful of challenging for a race win this weekend but will have their task cut out for a race win but a podium might be a more realistic target for the silver arrows.

Lando Norris had a decent qualifying session and ended up at P6 but his teammate Ricciardo could not improve his time in Q2 and could only put together a lap good enough for P14. It seems like an uphill task for McLaren this weekend to ensure that both the cars will finish in points scoring places. Fernando Alonso in the Alpine had another great qualifying session albeit no as impressive as Canada and will start the race from P7. His teammate Ocon could simply not match the Spaniard and will start the race at lowly P15.

Zhou Guanyu carried his momentum from Canada and put together a good qualifying session and will be starting the race from P9 while his teammate Bottas will start the race from P12. The star of the qualifying was Nicolas Latifi who impressed session after session in challenging conditions and made it all the way to Q3. He will line up at P10 on the grid while his teammate Albon failed to make it out of Q1 and will be lining up P16.

Alpha Tauri have left themselves with things to do for Sunday’s race after Pierre Gasly missed out on Q3 and will be lining up at P11. His teammate Tsunoda also failed to make it to Q3 and will start the race from P13. Both the Haas cars must have given the team last year’s flashbacks after they failed to make it out of Q1 with Magnussen lining up at P17 and Schumacher at P19. Aston Martin got it completely wrong with their setup yet again and it means that Vettel will be starting at P18 and Stroll will be starting at P20 respectively.

It promises to be an exciting race at Silverstone with the Ferrari and the Redbulls lining up alternatively on the grid at the front. With a good chance of rain for the race, the drivers and the teams cannot afford a slip up, which makes the race all the more exciting come Sunday.