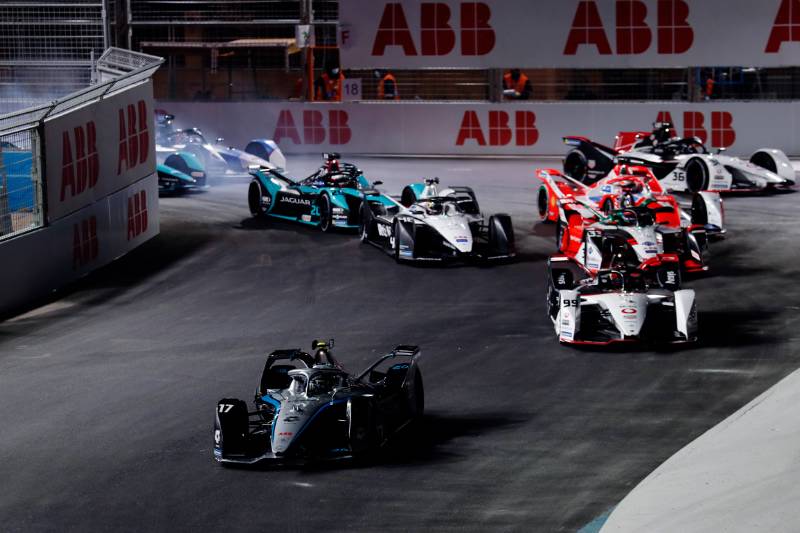 Season 7 of Formula E officially kicked off this weekend for the season’s first night race in history. Set in the sprawling desert of Ad Diriyah, the historical old city under carbon-friendly lights, the double header was certainly a tale of two halves with Mercedes driver Nyck de Vries heading to Rome as the championship leader, but by no means are Mercedes running away with their first potential title in the electric series.

De Vries had shown a strong start to the weekend in topping both practice sessions and took a dominant pole in qualifying, by six tenths of a second from his nearest rival, Porsche’s Pascal Wehrlein. Rene Rast was able to line up in P3 in his first full season in Formula E, whilst Edo Mortara was able to put the Mercedes powertrain to good use and claim P4 in the Venturi. Alex Lynn and Mitch Evans rounded out the top six, the pair promoted to the final two slots of superpole by a bizarre timing incident in the initial qualifying stages in which Sergio Sette Camara crashed at the end of qualifying. Nick Cassidy, Tom Blomqvist and Nico Muller’s laps were deleted by the stewards and they were not permitted to run again. The qualifying format again mixed up the grid with the reigning champions Techeetah and Mercedes’ Stoffel Vandoorne starting near the back having had to go out in the dreaded group one.

De Vries continued his dominance in the first race, pulling away almost immediately from a struggling Wehrlein at the start, and from there, he never looked back. The Dutchman controlled the race perfectly, dictating the pace even throughout two safety car periods. Behind him, Wehrlein and Rast fought for track position, but the pair never threatened De Vries’ building lead. Despite Mercedes’ dominance, the driver of the day was surely Mortara. Starting fourth, he pulled a stunning manouvre on Evans and Wehrlein – passing them both on the straight by darting past the Jaguar and squeezing himself into the gap left by Wehrlein. The Porsche faded in the latter stages of the race, with Evans able to claim P3 from Wehrlein. On the other side of Jaguar’s garage, Sam Bird’s first outing did not go to plan. The Brit was looking strong, battling for P6 with Alex Lynn when the two collided, bringing out the first safety car of the season. A second safety car followed to recover Max Gunther’s stricken car, allowing the battle for P2 to be ignited in the dying stages of the race, Mortara using his attack mode to sweep into the second podium position. But it was de Vries who claimed his first win for Mercedes, and all eyes were firmly fixed on the second race to see if the German team would continue their winning streak.

If Race 1 was heaven for Mercedes, then Race 2 was almost certainly hell. A horrendous crash in the sole free practise session for race hero Mortara saw the Venturi driver taken to hospital for additional checks and all Mercedes-powered cars were banned from taking part in the qualifying session. It was later discovered that this was the result of a software issue leading to brake failure. With Mercedes and Venturi out, qualifying became a mixed grid. Evans and Rast failed to set a time in the opening group as they didn’t reach the start-finish line in time, leaving them at the back of the pack. But it was another Dutchman – Envision Virgin’s Robin Frijns who stormed the field by half a second, joined in superpole by ex-teammate Sam Bird, the Dragon cars of Nico Muller and Sergio Sette Camara, and the Nio 333 cars of Tom Blomqvist and Oliver Turvey. Ultimately, Frijns took the first pole of his Formula E career ahead of Camara who took an impressive front row in the Dragon and Sam Bird slotting into P3. Turvey and Blomqvist filled P4 and P5, with Muller taking the final spot in the top six after a scrappy run. It was an excellent boost to Dragon and Nio to have both cars inside the top six after their previous struggles over the past few seasons.

With the likes of Mercedes and Audi starting further back, the second race was expected to provide fireworks and it certainly did. Frijns pulled away at the front, taking Sam Bird with him as Camara suffered an initial poor start – and the pair began their duel in the desert with Frijns leading the way. However, the Dutchman began to struggle with energy consumption and fell behind Bird on lap 21. However,  the ex teammates were not the only ones caught in a duel. The tension that had simmered between current reigning champion Antonio Felix da Costa and former two time champion Jean-Eric Vergne was reignited as the pair began their rapid ascent through the pack in the opening stages of the race. However, after their initial harmony when arming themselves with attack mode, the pair came together at turn 23, narrowly avoiding an incident. Vergne never got to challenge Frijns for P2 after the race was red-flagged after a long safety car period with four minutes remaining on the clock.

Mahindra’s Alex Lynn was involved in a massive incident with Mitch Evans in the latter stages in which his car became airbourne at one stage. Lynn was taken to the hospital and thankfully, has now been released. Due to the severity of the incident, the stewards deemed the order the cars were in behind the safety car the valid result – with Bird taking his first win for Jaguar, Frijns collecting his first podium of the season, and Vergne rounding out the top three. However, the Techeetah man’s podium was taken away a few hours after the race when he was served a penalty for not taking his second attack mode during the race. Rast and Blomqvist too were penalised for failing to use their attack modes, whilst Nick Cassidy who had finished an impressive P5 was handed a time penalty for speeding infringements.

Riyadh’s first night race served up some interesting fireworks, and it’s almost certain that the action will continue in Rome in six weeks’ time.