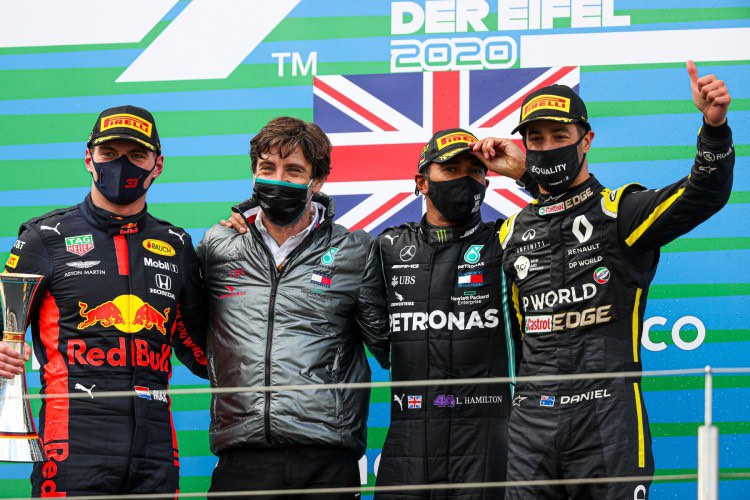 Losses of power, tyre temperatures and tangles made for a thriller of an Eifel Grand Prix. As for Valtteri Bottas, who started on pole, he was hit with reliability issues giving Lewis Hamilton less of a hassle fending off Max Verstappen. The six-time champion was able to bring it home for a record-breaking 91 race wins, matching the mighty Michael Schumacher.

A clean getaway for the field meant it was not until lap 9 that the first events took place as Charles Leclerc’s attempt to tame the charge of Ricciardo was swiftly halted and the Monegasque was forced to pit straight after for fresh tyres. The other Ferrari driver Sebastian Vettel was having another dismal weekend and was not able to compete with his teammate nor the rest of the field, spinning the car into the first corner for good measure.

A costly lock-up relegated Bottas to second as Hamilton capitalised on this opportunity and took first. Not long after it was to get worse for Bottas as he retired and unluckily, after the momentum he was on from last race, saw the the gap increase to 69 points to Hamilton in the Drivers Championship.

George Russell was a sitting duck when Kimi Raikkonen locked up and sent the Williams onto two wheels, ending the race for Russell and bringing out a Virtual Safety Car. Kimi also indirectly impacted the race for Romain Grosjean as the Frenchman reported on team radio that he thought his finger was broken after Raikkonen’s car spat gravel towards the Frenchman’s cockpit.

Alex Albon also endured a tough weekend having been pipped by Leclerc on Saturday and he eventually retired the car early. This will be a weekend to forget for the Thai driver who is in a ruthless Red Bull driver market and he will be looking towards Portugal to set more pointers to retain his seat for next year.

Nico Hulkenberg, after jumping in last minute for the unwell Lance Stroll, had a relatively calm weekend following his call up. The German came away with a brilliant 8th, place taking Driver of The Day. This will be valuable in his efforts to get a seat back in Formula One, and the result proved valuable to Racing Point as well. His finish, coupled with Sergio Perez’s fourth, placed them ahead of McLaren and now into 3rd place in the constructors’.

There was a late safety car as Lando Norris pulled to the side to take to the deck chairs as his “Default Zero 3” wheel setting was not able to get the car home. This however was timely for the rest of the teams and brought forth a new strategy as they jumped into the pits to grab extra points.

The restart gave exciting skirmishes in the midfield and Ricciardo attempted a move up the side of Verstappen to further cement a trip to the tattoo parlour with Cyril Abiteboul. It wasn’t necessary though as he will be looking to his friends back in London after taking 3rd  to get one done for Renault’s Managing Director.

The top three crossed the line all improving on their start positions with a surprise podium for the Renault who have not seen the top steps since Malaysia 2011, and Ricciardo’s return to the steps since Monaco 2018.

A celebration of Hamilton’s achievements was met with Mick Schumacher handing over his father’s iconic helmet in honour of matching the record—rather fittingly at the German’s home Grand Prix with the Schumacher S being named after him. He added in his post-race interview that he remembers playing against the seven time world champion on Grand Prix 3 aged around 13-14 and now it looks ever promising that he will complete his climb to being the most successful driver in Formula One.

The next stop is Portugal, where Formula One has not landed since Damon Hill’s win at Estoril in 1996. The Algarve International Circuit in Portimao will host the Grand Prix on the 25th October. And two weeks on from the Eifel Grand Prix the F1 Drivers’ Championship is shaping to be heavily contested in the midfield and the Autodrome will hopefully maintain the enticing battle with 6 confirmed races in this season still to go!