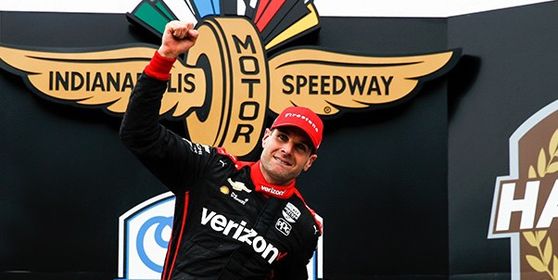 Penske’s Will Power fended off a charging Colton Herta to claim his 39th career IndyCar win from pole position at the Harvest GP, now tied 5th on the all-time IndyCar wins list with the legendary Al Unser. Further down the order, Josef Newgarden finished in 4th to cut the championship deficit to Scott Dixon to just 32 points.

Power pulled a healthy 5-second gap from the rest of the field at the start before pitting from the sticker reds onto the slower, but more durable sticker black tyres.

Alexander Rossi was able to reel Power in during the second stint, coming out just two seconds behind the Australian on the blacks while Power had switched back to the reds.

Rossi slowly caught up to the back of Will Power only to be caught up by Colton Herta – also on the sticker reds – who made short work of his Andretti teammate round the outside of turn 1.

Herta, having never finished second or third, was chasing his fourth IndyCar win, staying within a second of Will Power for the last 10 laps. Unfortunately for Herta, Power was able to use his ‘Push to Pass’ effectively to get a good run out of the final corner. That, alongside having a healthy slipstream from a few backmarkers, was enough to make sure Colton could not have a good enough opportunity into turn 1. This gifted Power his second win of the season and moved him into 4th position in the championship standings.

Alexander Rossi rounded out the top three, taking his 24th career podium, ending in style what has been a miserable season for the most part.

Defending champion Josef Newgarden fell from 9th to 11th on the opening laps, only one spot ahead of his championship rival Scott Dixon. However, he was able to make short work of Ryan Hunter-Reay in front and proceeded to work his way up the grid. He made it up to 5th before the first pit stops, and then was able to undercut the Arrow McLaren SP driver Patricio O’Ward for 4th.

Unfortunately for Newgarden, 4th was where he stayed, unable to make any ground on Alexander Rossi, who remained 10 seconds ahead during the final stages of the race.

His 4th place cuts the deficit to Scott Dixon for the 5th race in a row. What was a 117-point lead leaving race 1 of Gateway has now crumbled to just a 32-point lead going to St Petersburg in 3 weeks’ time. It is staggering to think that in just 5 races Newgarden has carved 85 points out of the points lead, an average of 17 points per pace.

With 54 points on offer, Scott Dixon must finish in 9th place (excluding bonus points) at St Petersburg to secure his 6th championship title.

Pato O’Ward took 4th ahead of Jack Harvey, he and his Meyer Shank Racing team an ever-present challenger at this circuit and buoyed by the recent investment of Formula 1 owner Liberty Media in its squad.

Behind Harvey, Graham Rahal turned a 10th-placed start into seventh, ahead of a typically methodical if not rapid drive from Dixon.

Making up places in the early phases of the race, he came up short against Ryan Hunter-Reay who contacted the Kiwi going into turn 1, putting a hole into the right-side underwing of his car.

Seemingly unphased by this damage, Dixon claimed 9th by passing Santino Ferrucci and by benefitting from positions gained during the first pit stops.

He ran eighth for the last stint but was unable to overturn Rahal.

The final race of the season at the Firestone Grand Prix of St.Petersburg will crown another champion in either Dixon or Newgarden on October 25.