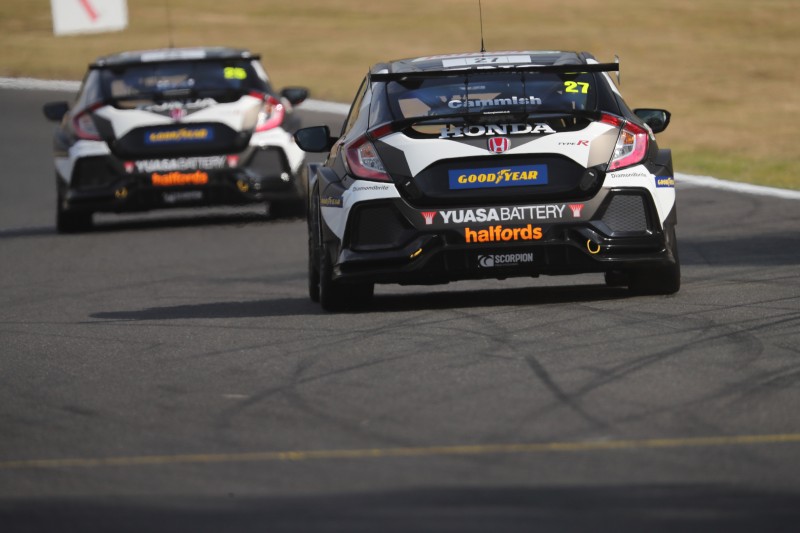 Turkington had a great start and flew up to third on the run to Paddock bend, with BUtcher holding off Cammish. Turkington’s team mate Tom Oliphant slid off later on in the lap but did well to recover and only lose a few places.

The best fight was for fifth place, which was occupied by Jake HIll in the MB Motorsport Honda Civic. Tom Ingram was first to challenge HIll, before Josh Cook slid off while fighting the pair for fifth. He returned to the pits to clear any debris out of his radiator before rejoining.

Out front Butcher and Cammish were fighting for the lead, the Honda looked more stable but Butcher’s Ford Focus ST held firm. Ingram had another go at passing Hill for fifth, and on lap 12 the Toyota driver finally passed Hill.

Meanwhile further down the grid Aiden Moffat and Matt Neal collided, Neal dove down the inside and tipped Moffat round, but the Infiniti tapped into Neal and spun his Team Dynamics Honda into the wall and out. Bringing out the Safety Car.

With a three lap dash to the flag, Cammish received a stroke of luck as Butcher picked up a puncture going out of Paddock bend and Cammish passed at Druids.

Cammish took the chequered flag and won the sixth race of his career. Turkington grabbed second and Ollie Jackson held off a speedy Ingram for the final podium slot.