Jonny Adam and Graham Davidson took a hard-earned pole position for the first of two British GT two-hour enduros at Donington Park in 2019.

The TF Sport Aston Martin driver pairing were over two tenths clear of their nearest rivals for overall pole position, with the driver’s times combined to set an aggregate qualifying time.

Dennis Lind and Michael Igoe will start second tomorrow after an excellent effort from Lind took the Lamborghini Huracan pairing from sixth to second, while Rob Bell and Shaun Balfe in the Balfe Motorsport McLaren 720S will start third tomorrow afternoon.

Ross Gunn replaced Marco Sorensen in the Beechdean Aston Martin and took himself and Andrew Howard to sixth ahead of Bradley Ellis and Ollie Wilkinson, Nicki Thiim and Mark Farmer will start eighth ahead of Ben Green and Dominic Paul.

Seb Morris and Rick Parfitt could only manage tenth on a difficult circuit for the JRM Bentley, while Tom Onslow-Cole (Guesting for the absent Adam Christodoulou) and Richard Neary go from 11th ahead of Jack Mitchell and JR Litmann.

The pacey RAM Mercedes of Callum Macleod and Iain Loggie will start from 15th and last after Macleod came to grief at the Fogarty Esses following Loggie’s fourth place in AM qualifying. 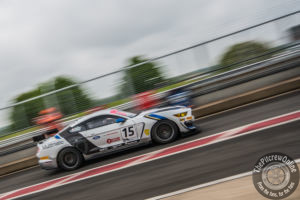 Meanwhile for Maxwell and Priaulx it was the second pole position in the GT4 class this year.

James Dorlin and Josh Smith were second, after coming so close to victory at Silverstone two weeks ago before technical issues saw them retire, while  GT4 championship leaders Dean MacDonald and Callum Pointon in the Tolman Motorsport McLaren 570 will start from third in class tomorrow.

Mark Kimber and Jacob Mathiassen are fourth ahead of Scott Malvern and Nick Jones, Malvern and Jones leading the GT4 Pro/Am entries.

Next on the GT4 grid is the second Pro/Am entry of Martin Plowman and Kelvin Fletcher in the Beechdean Aston Martin entry, while Jordan Collard and Lewis Proctor in the Tolman McLaren are seventh ahead of Andrew Gordon-Colebrooke and Angus Fender.