Iain Loggie felt that his and Callum Macleod’s victory at the British GT’s Silverstone 500 even was justice after an unfortunate start to the season.

Loggie was taken out from the lead at Oulton Park after showing excellent pace all weekend, while he and Macleod did not compete at Snetterton after Loggie was injured in an horrific cycling accident.

The Scotsman feels that it was about time RAM had some luck.

“I thought after we went pole at Oulton it would be about getting out of the first two corners safely as we were seven or eight tenths clear so no one would be able to overtake you. So I think it is justice for that and even more justice as we didn’t compete at Snetterton.”

Loggie broke several bones in the accident that ruled him and Macleod out of the Snetterton event, but despite the severe injuries felt fine at the British GT series’ longest race.

“It’s been great, that was five weeks after a massive cycling crash, I broke my collarbone in two places and my wrist in half a dozen places. Five weeks ago I was on the operating table so to be back here at Silverstone and win is amazing, I am really pleased.

“I am all good, the second stint I was starting to feel my wrist a little bit but I am absolutely fine and I will be a thousand percent right for Donnington in a couple of weeks time. Hopefully we can do something there.”

Loggie had an early battle with the racey Shaun Balfe in the McLaren 720S as the two and Graham Davidson battled for the GT3 lead early in the race.

The 56-year-old was never worried about contact behind from behind, with the battle between two experienced Am drivers a very clean affair.

“To be honest we had noticed that the Balfe McLarens had been quick all weekend. I actually didn’t feel the pressure from the McLaren because I know the driver of that was very experienced and he wasn’t going to run into the back or hit you or do anything silly.

“I was happy and was able to concentrate on the track in front but at the same time knowing that I can’t make any mistakes, keep it clean and don’t get any penalties.”

And the Scotsman was full of praise for teammate Macleod and his final stint to take the lead late on, after rival Jonny Adam came to grief against the Ford Mustang GT4 entry of Chad McCumbee.

“Callum did a great job there, he was four seconds back to start with and within five laps it was five tenths. It was unfortunate for Jonny but that was nothing more than sheer pressure from Callum and it meant that the driver in front has got to make a move.” 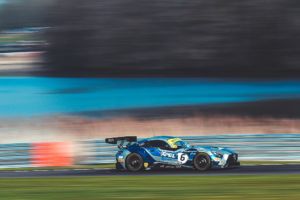