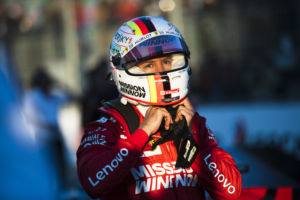 The 1001st GP of Formula One takes place at Azerbaijan, on the very narrow streets between some old and classic buildings with the modern city centre in the background. Baku has become the scene of two classic Formula One races, in 2017 and 2018. Whereas the inaugural race in 2016 was deemed very dull. Would the 2019 race become one of the classic ones, or will it be a sarcastic ‘Well Done Baku’ again?

Even before the start of the race drama took place. FP1 got suspended after 15 minutes due to a loose drain cover which caused major damage to George Russell’s car (and to add to that the tow truck crashed into a bridge), and qualifying almost took two hours (instead of one) thanks to two red flags caused by Robert Kubica and Charles Leclerc.

With all of that cleared up, it’s time for the five red lights to come on, and off again. Hamilton gets off the line quicker than his teammate on pole, but the Finn defended his position and then drove away. Perez jumped Verstappen on the start and takes third place.

It got worse for the Dutchman when Norris almost overtook him on the main straight after just one lap, but after a few laps he got back into the rhythm and closed the gap to Perez. Eventually after a few circuits behind the Mexican, Max uses DRS to overtake the Racing Point car for P4.

Lap twelve and Vettel goes into the pits from third place for his pitstop to the medium tyre. He gets back on track in P5. His teammate was going much faster on the mediums, almost 2 seconds faster than both Mercedes’ and soon Mercedes followed with a pitstop for Bottas.

One lap later Hamilton comes into the pits for the same strategy: opting the medium tyres. This gave Leclerc the lead. Verstappen goes to the pits in lap fifteen, putting him behind Gasly (who still had to make his pit stop).

The chaos never struck Baku in the first half of the race, and it seemed like strategy would make the difference today. Mercedes versus Ferrari was on again, with Mercedes looking better for the win. Leclerc in the lead on his old medium tyres was losing time to Bottas on his much newer set of mediums.

The first bit of chaos happened when Grosjean missed his braking point and had to take the exit road. He lost three places thanks to that mistake.

In lap thirty-two the second bit of chaos happens. Ricciardo overshoots turn three and Kvyat on his outside can’t turn in. They didn’t hit each other in that incident, but they did when Ricciardo tried to back off onto the track and then struck Kvyat who was just standing there.

Leclerc finally comes into the pits with sixteen laps to go. He goes for the soft tyres and now has to charge through again, as he dropped back behind Gasly in P6. Two laps on his new tyres and he overtakes the Frenchman for fifth place, giving room to close the gap to Verstappen.

Gasly drives an amazing race, his best for Red Bull yet, until in lap 39 his engine stopped. The first Safety Car is a fact, although it is the Virtual SC. Just eleven laps to go and Bottas was leading, ahead of Hamilton and Vettel. In fourth Verstappen was chasing down the German.

For the first time this season Ferrari try to get the fastest lap. Leclerc, on P5, has a gap of 29s to Perez behind and makes a pit stop to push for four laps and get that extra point. The soft tyre didn’t seem to be the best tyre of the day, but thanks to a slipstream by Hulkenberg he managed to clinge the fastest lap and set a new lap record.

Five laps to go and Hamilton gets closer tobhis teammate up front, trying to get DRS to pass his Finnish teammate. Hamilton pushed a Hammer time lap out for the extra point, but more importantly

he now was within DRS range with two laps to go. In the end Bottas won the 2019 Azerbaijan GP ahead of Hamilton. Vettel would join them on the podium, with Verstappen and Leclerc completing the top 5.

After two very iconic races in 2017 and 2018, all drama was happening on the Friday and Saturday at the 2019 edition of this race. So, well done Baku.

Image courtesy of Scuderia Ferrari
Baku, 27 April 2019 – The Scuderia Ferrari Mission Winnow SF90s will start the Azerbaijan Grand Prix from the second and fifth rows of the grid, when the race starts
Share the passion