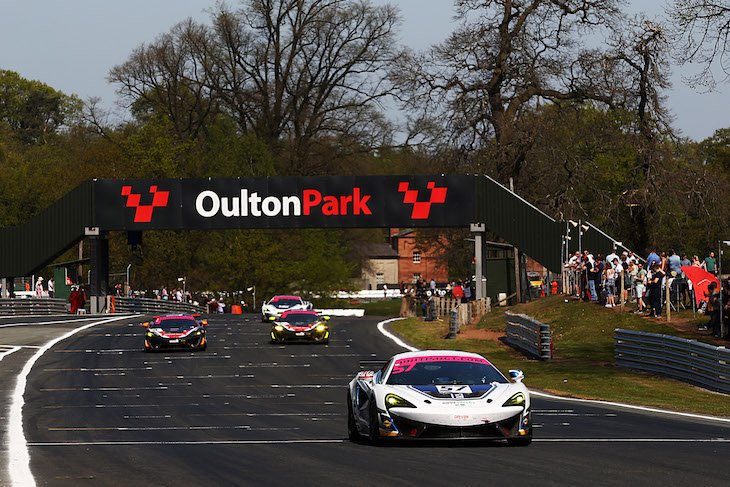 HHC Motorsport made a dream start to life with McLaren by winning their first race as a partnership courtesy of Dean MacDonald and Callum Pointon.

The duo were a feature at the front for the entire race having managed to split the leading Multimatic Racing Ford Mustangs of Jade Buford and Scott Maxwell, the Mustangs having been dominant on Saturday during qualifying.

Maxwell and teammate Seb Priaulx would go on to have dramas that would drop the fast Ford back through the order during the second stint as Maxwell went through the gravel after contact and Priaulx spun into the wall while on a comeback trail.

Buford and Chad McCumbee also dropped back as Mustang dominance on Saturday gave way to all-conquering McLarens in Race One on Monday morning.

The Tolman McLaren of James Dorlin and Lewis Smith took second place after an eventful run that included contact with the sister car of Jordan Collard. Collard and Lewis Proctor would retire from second on the penultimate lap after catching fire while challenging for the lead.

The second HHC McLaren of Luke Williams and Tom Jackson was third ahead of McCumbee and Butford, while Josh Price and Patrick Kibble of TF Sport were the highest placed Aston Martin in fifth position.

Matt George and Steve McCulley were the Pro/Am category winners in the Invictus Racing Jaguar ahead of Martin Plowman and Kelvin Fletcher, the former passing Plowman’s Beechdean Aston Martin late on to steal victory in class.