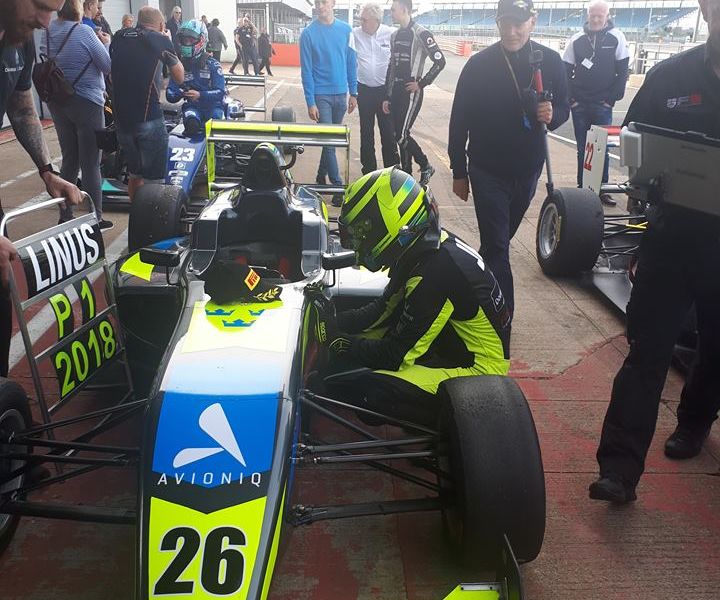 Linus Lundqvist was full of praise for his Double R team after securing the BRDC British F3 Championship on Saturday.

A win for the Swede coupled with a DNF for Danish rival Nicolai Kjaergaard meant that Lundqvist took an unassailable 85-point lead with 72 available.

A delighted Lundqvist was quick to acknowledge the role of his team.

“This feels unreal! Mainly a big thank you to my team Double R Racing. They’ve been amazing all year, it’s been a rollercoaster from the start and we’ve kept our head down and kept on going, and here we can stand and say we’re champions. Unbelievable and very emotional.”

Lundqvist was unaware that his championship rival had hit strife until he pulled into the pits after the race to see his jubilant team.

“I didn’t know that Nicolai had gone off. I saw at the chequered flag on the pit board it said ‘Linus, P1 2018’ and I thought ‘That is usually another way’ and when I came in they had it up and the whole team was gathered and I put one and one together realised that I might have done it.”

He didn’t have it all his own way in the first race of this weekend, after fending off a challenge from the fast-starting Tom Gamble.

“Tom made a better start than I did and while he wasn’t totally alongside, he was halfway there going into Maggots. I just held my line because I had the inside for the next one and from there I kept my head down and tried to push on. The car has been great and Silverstone is one of my personal favourite circuits anyway, that always brings me a bit of a boost.”

Lundqvist refused to be drawn on his plans for 2019 with a move to international racing now looking a certainty, preferring to focus on enjoying the rest of his championship-winning weekend.

“My focus isn’t totally on next year but we’re keeping an eye on things for the future, but I want to fulfil this year and stand here and say ‘I am champion’. We’ll see, I want to see this weekend through and enjoy the last two races and the Sunoco Challenge is still at stake. Hopefully there’s more exciting things next year.

“Maybe (there is) no pressure but you still want to enjoy it and I still want to win so let’s see what we can do for the rest of this weekend, I’m just going to enjoy this.”