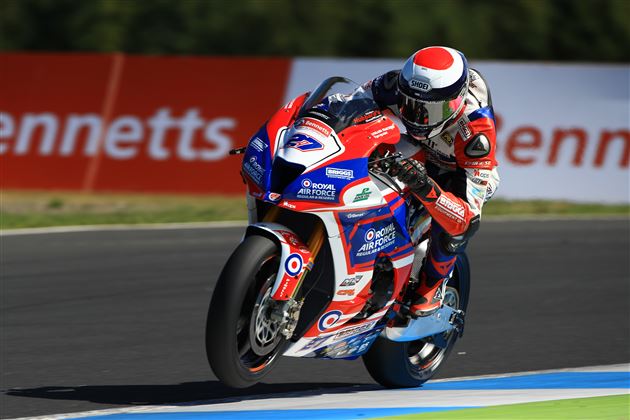 After the monsoon conditions earlier in the day, the circuit was drenched in glorious autumnal sunshine for the second race of the day. The track was still extremely greasy off the racing line, so those needing to make up positions would have to be brave under braking.

As the lights went out, Jake Dixon (RAF Regular and Reserve Kawasaki) hooked up the best start, leading his rivals by several bike lengths by the exit of turn one. The early gap allowed him to settle into his own rhythm without attention from his rivals. By the end of lap three, the 22-year old had over 3 seconds in hand to his nearest pursuers. In such a competitive field, a gap like that is very much “out of sight, out of mind”.

With the track drying lap by lap, and with nothing but empty tarmac in front of him, the Kawasaki man was able to consolidate his lead, and manage his tyres. The latter was certainly crucial in the final few laps. Having threatened to “pull the pin” this weekend, Dixon has duly delivered. A double victory around Oulton Park. The championship challenge is back on!

Falling in behind Dixon was Jason O’Halloran (Honda Racing BSB). The Australian shot up through the pack to second place and settled into a rhythm to chase down Dixon. He was followed closely in the early stages by Leon Haslam (JG-Speedfit Kawasaki) who diced with each other in a similar fashion to how they did earlier in the day.

Haslam eventually managed to force his way through and begin to hunt down the race leader. It was a display of relentless pressure as the series leader consistently chipped away at Dixon’s lead until he had closed to within just a few tenths of his rival. Unfortunately for him, he ran out of laps. Nevertheless, a brace of second place finishes means he has lost only 10 points to dixon in the showdown standings. Crucially, he’s extended his lead on all his over rivals. Not a bad day at all when you consider he began today from the back of the grid.

O’Halloran was then joined by Tommy Bridewell (Moto-Rapido Ducati), Tarran MacKenzie (McAms Yamaha) and Luke Mossey (JG-Speedfit Kawasaki). The quintet seemed to be locked in a battle for the final place on the podium. However at the start of lap 12, disaster befell the Honda rider. Under braking into Old Hall corner, he lost the front end of the bike and slid off onto the grass. His crash opened the door for Bridewell to make it a second visit to the podium this weekend, and he duly obliged. MacKenzie finished off another strong weekend in fourth place.

Further down the field, two riders provided a truly grandstand finish for the spectators today. Glenn Irwin (BeWiser Ducati) and Josh Brookes (McAms Yamaha) were locked for much of the race in their own private scrap. The Yamaha man winning the final drag to the line, out of lodge corner and securing fifth place. The result salvaged the weekend for the 2015 champion, having crashed out in race 1.

Michael Laverty (Tyco BMW) was the unfortunate recipient of a brutal highside crash, at the bottom of Cascades corner on lap 4. It looked like his front wheel just touched the grass on the apex – the front wheel dug into the soft ground, causing the rear wheel to unload and launch the Ulsterman across the track. Fortunately he was able to walk away (albeit very gingerly). A disappointing end to a difficult weekend for the team.