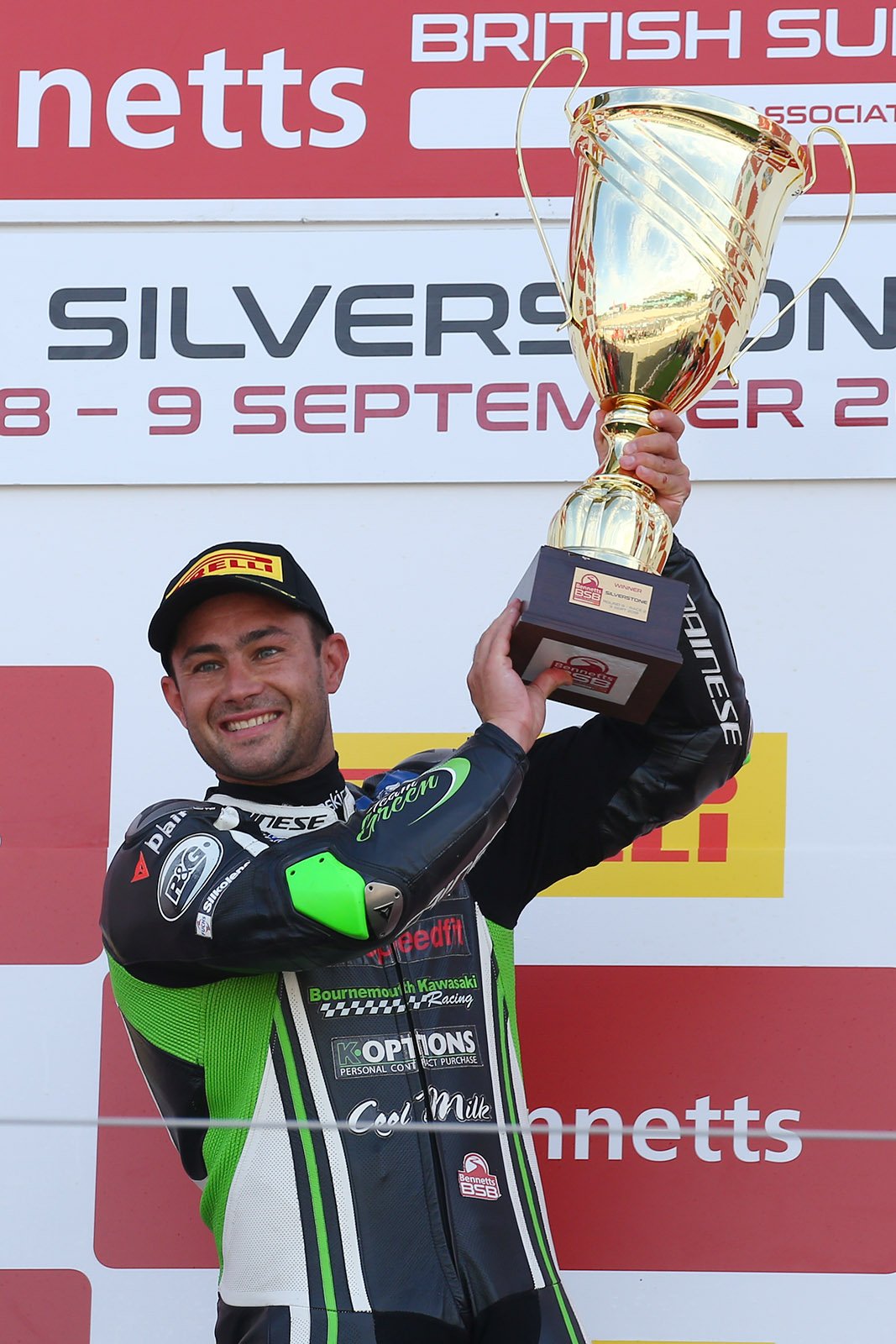 Leon Haslam (JG-Speedfit Kawasaki) completed a hat-trick of victories this weekend, after a real thriller of a duel with Tarran MacKenzie (McAms-Yamaha).

After a short delay, the race was restarted and run over 26 laps.

For those of you of a certain age the memory of Barry Sheene and Kenny Roberts duking it out for glory around Silverstone, in 1979, is probably the best racing memory of Silverstone. There is no risk of exaggeration when I say that this afternoon’s battle between Haslam and MacKenzie is equally deserving of the status of a ‘classic’.

The two had been almost inseparable on the track, all weekend. Once more this weekend spectators and television viewers were treated to a truly thrilling on-track battle. This time, the echoes between the Sheene-Roberts duel are too loud to ignore. Having both fought their way to the front of the field, the pair (despite constantly challenging each other for the lead) pulled clear of the chasing pack. Knowing then that the victory would go to either the Kawasaki or the Yamaha rider, the gloves were cast off and the duo engaged in a no-holds barred battle royale. Every corner presenting an overtaking opportunity. Daredevil lines chosen by both men as the lead of the race changed hands countless times. It was true wheel-to-wheel, nose-to-tail racing, with neither rider giving an inch to the other – but not once did the riders make contact. Two racers at the top of their game absolutely going for it,

It was fierce, but also as clean as you like. On the penultimate lap, MacKenzie dived up the inside of his rival at Copse, running them both out to the edge of the track on the corner exit. With the youngster in front, he maneuvered to the inside of the track at Maggots and Becketts. If Haslam wanted a third win so badly, he’d have to brave it around the outside. Utilising every last millimetre of rubber still attached to his tyres, Haslam let his Kawasaki drift out almost to the edge of the track, before squaring off the corner and twisting hard on the throttle. Apex speed compromised, but the payoff was a straighter corner exit, giving him a crucial speed advantage down the Wellington straight. With the Yamaha no more than a front-wheel in the lead, Haslam braved it out under braking through Brooklands and squeezing out MacKenzie into Luffield. With no chance of making the apex first, the youngster was forced to yield on this occasion. A final drag race to the line was the perfect climax to the race – in the end, Haslam holding off his young challenger by just 0.075 seconds.

Whilst we were witnessing that incredible duel the small matter of the ‘Showdown Decider’ – which organisers had no doubt spent copious amounts of money hyping this up before the weekend – was being decided. Going into the final race the likes of Christian Iddon (Tyco-BMW), Peter Hickman (Smiths Racing BMW), Danny Buchan (FS-3 Kawasaki) and Jason O’Halloran (Honda Racing BSB) were all competing for the final place.

For O’Halloran and Iddon it was a heartbreaking case of ‘so near, yet so far’. The Honda rider has endured an injury troubled season, so the fact that he arrived at Silverstone with a chance of making the showdown was more than a small miracle. It was a tall order for the 31-year old Australian this weekend, arriving at the circuit needing to close a 53-point gap to his closest Showdown contender. By the time the chequered flag fell this afternoon, it was a mere 6 points.

If there was a ‘Man of Steel’ award for this championship, then the recipient would undoubtedly be Christian Iddon. the Tyco-BMW rider would win it hands down. Following a big moment if qualifying yesterday – the bars of his machine wrenched themselves from his grip whilst under braking – he competed the three races with a broken collarbone. In the end, it was just 3 points which denied him a place in the showdown. However with BMW updating their S1000RR model later this year, there is reason to already be excited about the rider’s chances in 2019.

In the end, it was Peter Hickman who secured the sixth and final showdown place, and the sheer relief from both rider and team cannot be understated. Technical problems with the bike – including a broken gear lever – saw the Lincolnshireman plummet down the field late in the race. This followed a disastrous moment during the original warm up laps, when he crawled off track and into the pits. It transpired that there was no fuel in the bike. In the end, Hickman made it to the finish in P14. 2 points scored, and that was enough to qualify for the showdown.