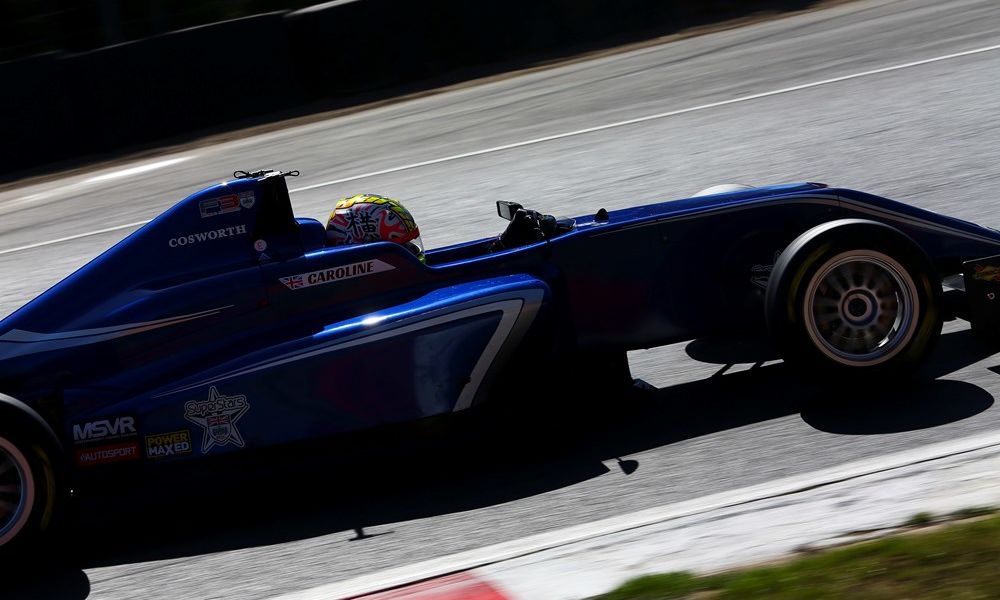 Jamie Caroline’s dominant display ensured that he continued his winning return to Carlin with victory in Race One at Brands Hatch.

He led home Double R’s Linus Lundqvist and Nicolai Kjaergaard, the former extending his championship lead to 125 points, while Billy Monger was fourth.

Sun Yue Yang made it four Carlin cars in the top five ahead of Kush Maini in sixth, with last year’s winner Krish Mahadik edging out Manuel Maldonado, Tom Gamble and Sasskorn Chaimongkol.

Caroline, who’s replacing the injured Clement Novalak, was delighted with his second win in four, and praised his relationship with Carlin.

“It’s a shame we didn’t start the season! It’s been great to link up with Carlin again, every time I come into the weekend it’s done to me because the car will be good, it adds a little pressure to do well.

“Quick teammates push me on a little bit, obviously I’m here as a sub for Clement (Novolak, who has a broken thumb) so I am trying my best to do a better job than them really. I wouldn’t say I’m doing  much better job but I’m doing as good a job as I can given that I’ve not had as much time in the car its my second weekend in F3, we got a race win at Spa albeit a reverse grid win but a win’s a win.”

After winning from eighth at Spa in the reverse grid race, Caroline was happier with a more traditional route to the flag, and credited an aggressive formation lap build for building a three-second lead early on in the race.

“Here a lights to flag win always feels a bit better, after all these years it’s great to be driving for Carlin again, two wins in two events isn’t bad. I got a lot of heat in my tyres, I’ve never worked tyres harder and I was knackered after that! I pushed like I was on a qually lap from the off, got the gap and then it was about maintaining that gap and looking after the car.

£I wish this was until the end of the season but I think it’s until whenever he’s fit enough to come back in, it may be Donnington clashes with his Euro programme, fingers crossed I can get something together for then.”

After a difficult Spa two weeks again, Kjaergaard was relieved to be back to form this weekend.

“It was great to get back on the podium after such a long time, I’d have preferred P1 or P2 after starting second but we got on the podium and the fastest lap, which is important for the Race Three grid.

“There’s still second on the table and I want to finish the season as well as I can.”

Linus Lundqvist had earlier pledged to go all out for the victory despite a huge points lead, but was satisfied with second place on Saturday.

“I wouldn’t say that I gave up the win after qualifying (fourth) but around Brands it is hard to overtake. There wasn’t going to be much chances of moves unless someone made a mistake, we made a good start and got to second on old tyres while the Carlin boys were on new ones.

“I’ll take another podium and extending the championship lead.”