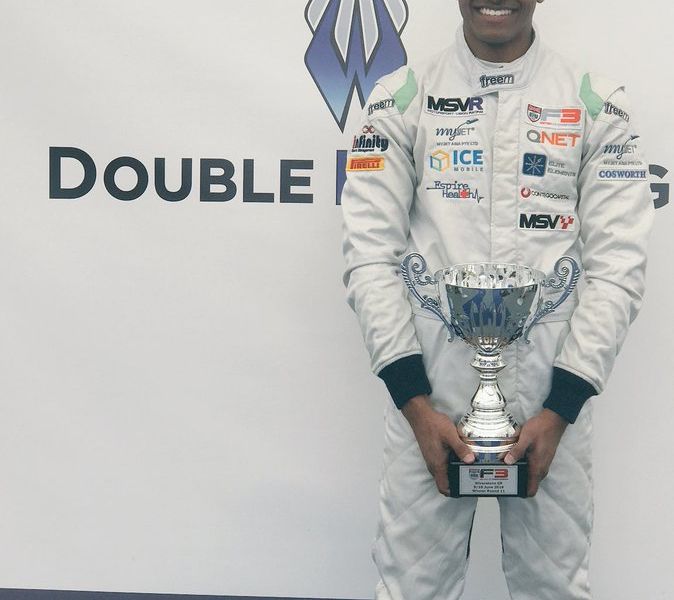 After coming to grief in Race One, Ravishankar started pole in the reverse grid race and didn’t look back as Sun Yue Yang fought to hang on to second with Tom Gamble an impressive third.

And Ravishankar was delighted to see his improvement this season laid bare.

“I love this circuit, it is a bit of a shame with the race yesterday because we had front wing damage and I had to drop back. We showed that we have the pace now.”

Ravishankar built a lead over Yang in the opening stages of the 10-lap race and controlled the race from there, something that was a deliberate tactic.

“I really pushed a lot in the first few laps because I knew that they would be fighting behind and that if I got a gap I’d be fine. Once I saw the fighting behind me I just realised that I had to just manage the gap.”

And the 18-year-old paid tribute to his Double R team for helping him settle during his first season in Europe.

“The tests were positive and I’m still new to Europe so I’m going to work as hard as possible between now and Spa.

“It’s been very difficult, with the weather and the cold conditions being something that I’m not used to so that was very difficult. The team has helped me settle in so much so a big thanks to them for supporting me through the tougher times.”

Meanwhile, Gamble has targeted more consistency after a run of bad luck since his first pole and win at Rockingham six weeks ago.

“After Rockingham on that Saturday we were top of the championship but since then we’ve had a lot of bad luck, I just need to get back on track, get some better qualifying and get closer to the front.”

An engine problem halted his progress on sAturday where he could only finish tenth, but an engine change brought about better luck on Sunday morning.

“We had issues yesterday with the engine and it was lacking power and costing us time, the guys at British F3 checked the engine and allowed us to change it so we swapped it last night.

“Everyone at Fortec did a great job changing it over, thankfully there were no problems today and we had great pace today.”