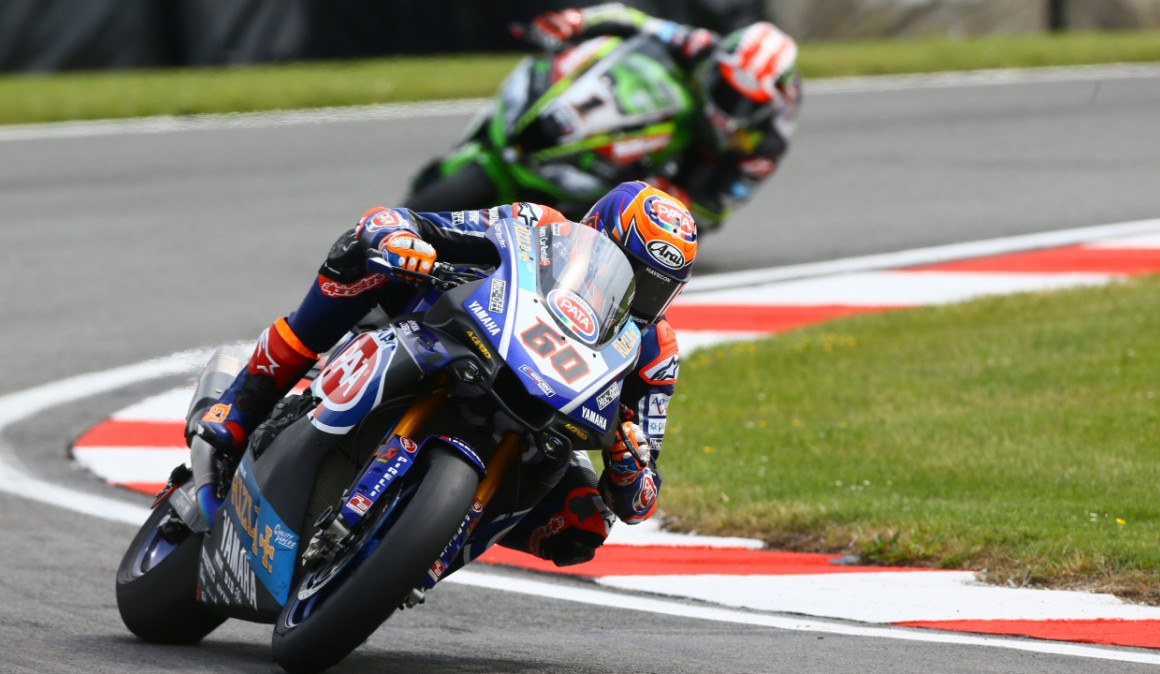 Michael Van der Mark (Pata-Yamaha) secured back-to-back victories this weekend at the British round of the 2018 World Superbike Championship, at Donington Park.

Due to the quirky partially reversed grid rules, the 25-year old began today’s race from ninth place on the grid having taken victory yesterday in race 1. Not that deterred Netherlands’ first superbike race winner one iota. As the lights went out he hooked up a perfect launch off the line, out dragging most of his rivals into the first corner at Redgate. The early laps were spent dicing with Lorenzo Savadori (Milwaukee Aprilia) and Jonathan Rea (Kawasaki Racing Team) over second place. The Aprilia could not live with the relentless pace being set and dropped out of contention for a podium finish.

With Rea kept behind him, the Dutchman set about chasing down the leader, Alex Lowes (Pata-Yamaha). As the laps ticked by, it became apparent that the British rider was struggling for tyre grip. Once he was caught, Van der Mark passing him was simply inevitable. The move was brilliantly executed; having pulled alongside Lowes through the fast switchback craner curves, before squeezing up the inside of his teammate at the old hairpin. Lowes’ troubles would ultimately see him fall back to finish in P4.

However, nothing would deny Van der Mark from completing the double today. Not even a resurgent charge from Rea in the closing laps could worry the Yamaha man – a further reminder (if needed) of his deep reserve of mental strength. Rea ambitiously attempted a do-or-die lunge at the Melbourne hairpin on the penultimate lap, but ran wide. The mistake consigned him to finish in P3, as Toprak Razgatlioglu (Pucetti Kawasaki) pounced to secure second. It was a brilliant ride from the 22-year old, carving his way through the field from tenth on the grid. History made twice in one weekend – today was the first time a Turkish rider has stood on a World Superbike podium.

It was a solid – if unspectacular – day for Aruba.it Ducati and Chaz Davies. The long night spent by the mechanics as they tried to solve the instability problems which have played the Panigale R all weekend. Sacrificing their straight line speed, and focusing on the bike’s ability to corner efficiently, Davies was able to bring home 11 points for a P5 finish. After the troubles the team have faced this weekend, its a result they will take. The other factory rider, Marco Melandri, endured another torrid race. Unable to ride with the confidence to push the bike to its limits, the veteran Italian could only manage P11. Ducati will be desperately hoping their fortunes improve next time out at the Czech round in Brno.

Leon Camier (Red Bull Honda) will be quietly satisfied with his ride to P8 today. Having been forced to sit out the previous round at Imola due to injury, the British rider’s primary objective was to just finish his home round. Job done, and brought home a very respectable tally of points for his troubles. Even a not fully fit Camier is worth his weight in gold for the team as American rookie, Jake Gagne (P13), continues to struggle on his Fireblade machine this season.

Loris Baz (Althea BMW) once again fought tooth and nail for every place he could get. The Frenchman has surprised the field this weekend when he secured his first front row start of his superbike career – the first time in five years for any BMW team. Although he was unable to maintain a front running pace during either of the two races – due to the comparative aging of the BMW machine to the rest of the competition – he was involved in several on-track battles. Most notably today against Jordi Torresc (MV Agusta). The pair spent much of the race locked nose-to-tail as they hounded each other across the parkland track. Eventually though it was the Spaniard who triumphed, securing P9. Baz completed the top ten.

For Milwaukee Aprilia, it was a case of ecstasy and agony. Whilst Savadori battled his way to finish in P7, it was a different story for his teammate Eugene Laverty. Despite starting from the front row of the grid, a bad start left the 31-year old struggling in the midfield. Although he seemed competitive enough to compete with the likes of Camier, Torres and Baz, with eight laps remaining the Aprilia pulled off the circuit. It later transpired that the Irishman had suffered an issue with the wheel speed sensor, which caused a malfunction with the bike’s electronics.

A final note on the wildcards from British Superbikes. Luke Mossey (Pedercini Kawasaki) was the highest finisher in P14, ahead of the Buildbase Suzuki machine of Bradley Ray, who claimed the final points scoring finish in P16. Leon Haslam (Pucetti Kawasaki), having experienced the highs of yesterday experienced the lows of today – crashing out early on in the race and retiring the bike. Gino Rea on the OMG Racing Suzuki was the last classified competitor to finish, in P19.

World Superbikes returns with Round 7 at the Automotodrom Brno, Czechia – June 8th-10th.