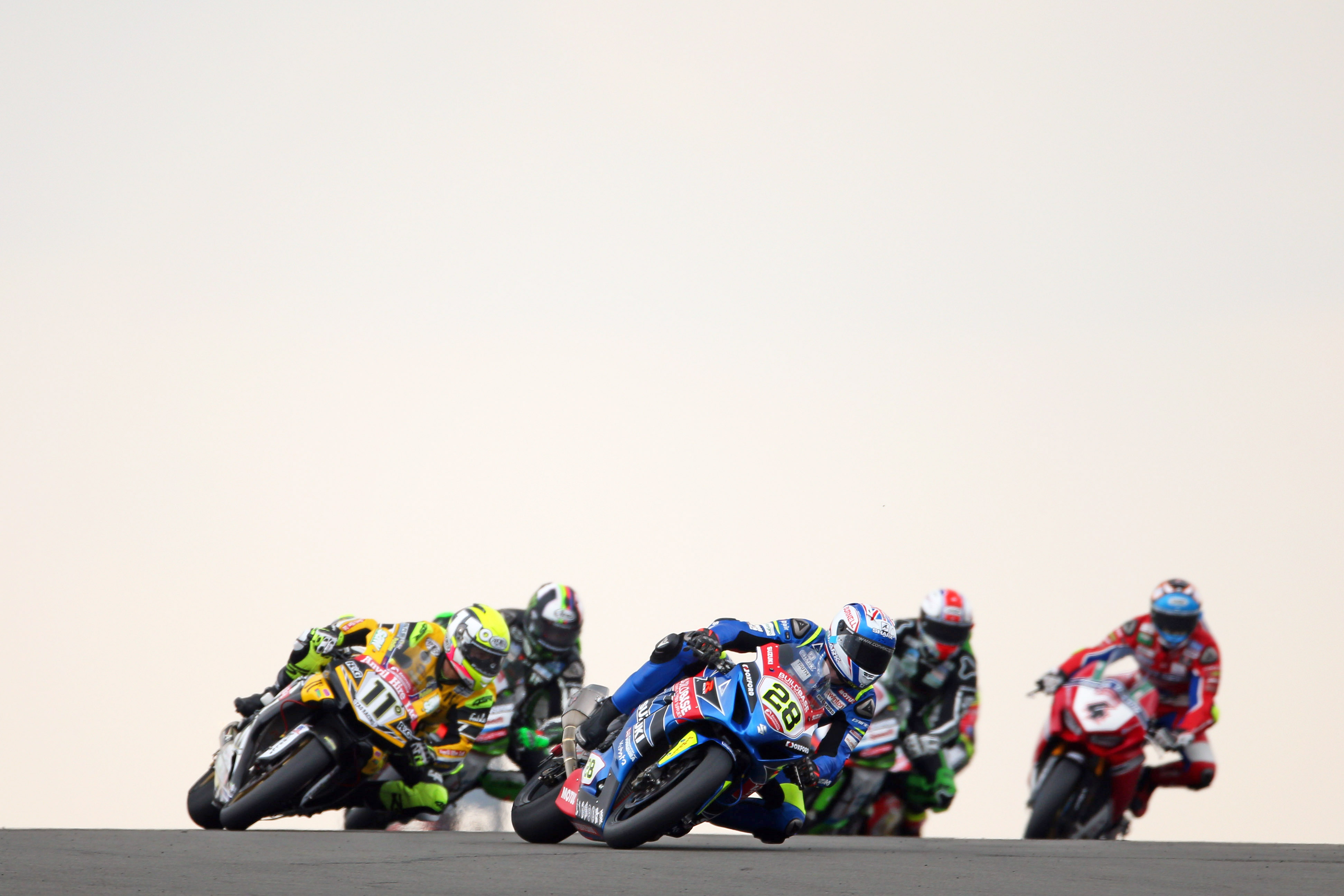 Bradley Ray took pole position at Brands Hatch for Buildbase Suzuki, with a stunning 44.997 second lap. It is the perfect way for Ray to continue after his debut double in Donington Park two weeks ago. The race tomorrow could be a different story, however, as almost all riders will be looking to run the soft compound Pirelli P Zero rear tyre, and Ray steamed to his success in Donington on a hard rear. Of course, we will not find out whether Ray will suffer with the soft rear until tomorrow, but for now it is safe to say that his performance in qualifying today was superb, and the pole position well deserved.

Shane Byrne lines up second for tomorrow’s first race. As he eluded in his post-qualifying interviews, it will be crucial for Shakey to avoid a repeat of his race one start, especially with overtaking points at a premium at the 1.2-mile Indy circuit at Brands. It was an uneventful session for the reigning champion, but in the final stages of Q3 he seemed to lack the rear grip to be able to mount a challenge for pole position.

A final lap from James Ellison sprung the number 11 Anvil Hire Tag Racing Yamaha onto the back of the front row for Sunday’s opening race, and he will be aiming to claim the win he should have had in race one last season before a crash at Druids. But once again today, Ellison claims the title of top Yamaha, one he will no doubt smugly enjoy after the doubts cast over his potential for this season thanks to moving to a privateer Yamaha team from the factory supported team.

Michael Laverty made a welcome return to the top positions as he claimed fourth in the Datatag Qualifying session today. There was a lot of questioning about whether Laverty deserved another shot in the Tyco BMW team this year, and so it is good to see him silence the critics with this performance, and hopefully for him he can make a good race tomorrow, which would build on the solid start to the season he had in Donington.

Leon Haslam is fifth for tomorrow, and is one who might be expected to struggle if he cannot make the soft tyre go the distance. This has been the case in the past two seasons, with Haslam regularly preferring the harder option Pirelli rear tyre for the race. Unfortunately for Haslam, the harder compound does not seem to be an option at the moment because the 2018 version has no grip. It seems Leon has a choice: suffer for grip all race long on a hard rear, or struggle to make a soft rear last the full thirty laps.

Tommy Bridewell will be the second Suzuki on the grid for race one tomorrow after he set the sixth fastest time in Q3 for Halsall Suzuki. This presents a good opportunity for Bridewell to make up for a difficult weekend in Donington.

Jake Dixon will line up seventh tomorrow and, as Bridewell, is looking to recover from a difficult opening round. Jason O’Halloran was eighth fastest in Q3, but was lucky to get out at all after a fall at Druids at the end of Q2 having already set a time sufficient for Q3 qualification. Nonetheless, the Honda Racing mechanics did a fantastic job to put the #22 CBR1000RR back together so that the Australian could get out with enough time to set a lap time. The pressure is on O’Halloran tomorrow – with teammate Linfoot out thanks to a cracked C6 vertebra all the team’s hopes lie with Jason. Tarran Mackenzie was extremely impressive in qualifying, and finally took ninth place for tomorrow’s first race grid.

Christian Iddon will be at the head of row four tomorrow, sharing it with Richard Cooper and Glenn Irwin. Meanwhile, row five consists of Luke Mossey’s Kawasaki, Peter Hickman’s BMW and the S1000RR of Jakub Smrz, whilst Taylor Mackenzie heads up row six from Danny Buchan and Kyle Ryde. Gino Rea was only 19th, but still ahead of Josh Brookes who had a nightmarish qualifying, and Mason law was 21st. 22nd went to Sylvain Barrier, whilst Shaun Winfield took 23rd from Carl Phillips who rounds out the grid for race one at Brands Hatch Indy.