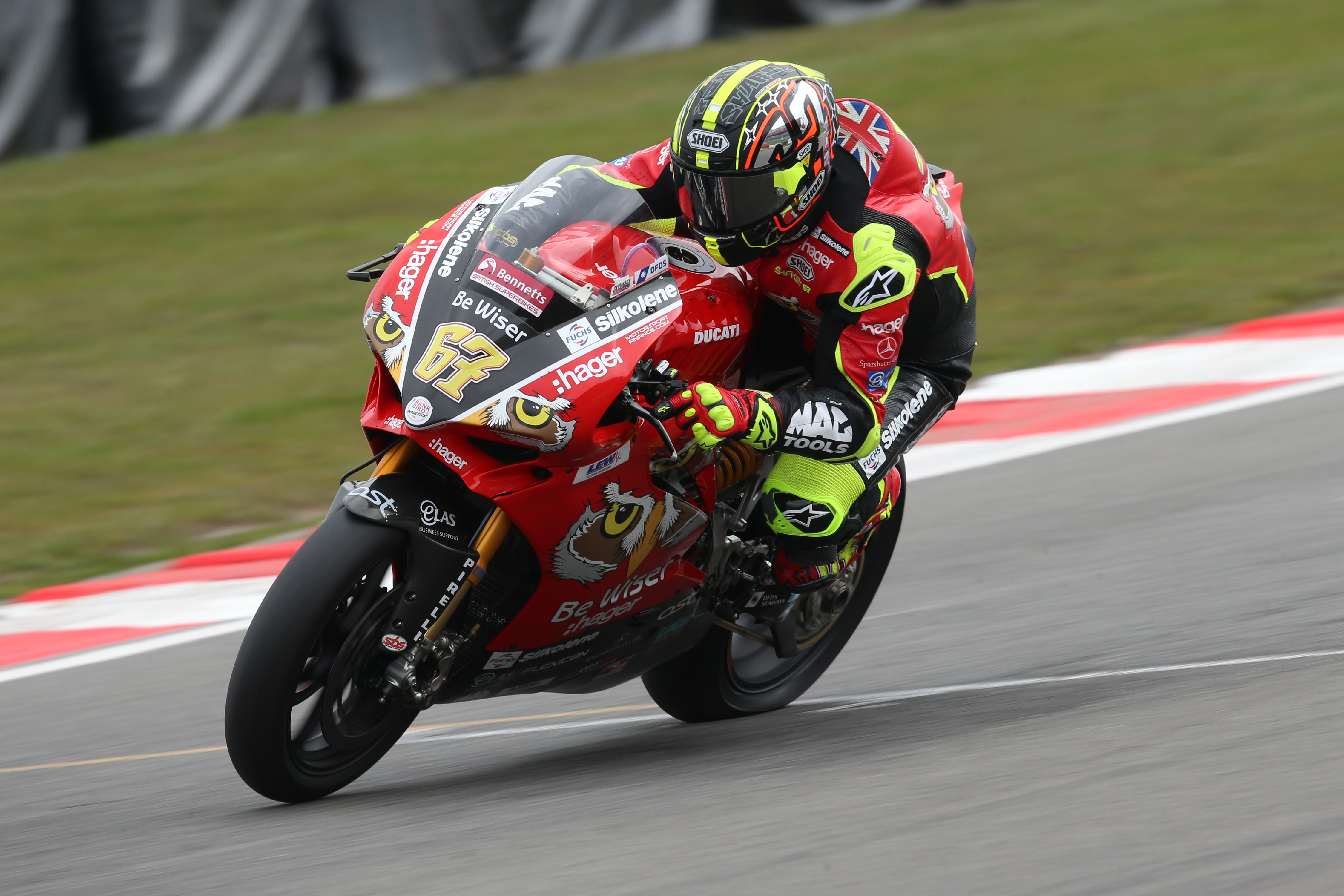 Starting from his first pole earned from qualifying, the pressure was on 20-year-old Bradley Ray to convert it to a third race win of the season.
It was a good start from the Buildbase Suzuki rider, and he got into Paddock Hill for the first time in the lead, with Byrne and Haslam in tow, whilst Michael Laverty maintained his grid position of fourth.

But already the race had started to go away from James Ellison. By the end of lap one he had dropped to eleventh. Perhaps a bad start? If so, he should have started to pull himself through the pack immediately, but instead he continued to fall backwards, and by the end was out of the points, blaming the quality of his Pirelli rear tyre for the issues, further worsening the standing of the Italian marque in the paddock after a concerning opening round in Donington. These BSB tyre issues go hand in hand with the issues they have suffered with their World Superbike tyres, and the quality control there. It is essential for Pirelli to deal with these issues because, as has been discussed with Michelin in MotoGP, it is only a matter of time before an anomalous tyre decides the championship.

Back to the race, and Leon Haslam had been dropped by the leading two, and had fallen back to Jason O’Halloran and Christian Iddon behind, who in turn had passed Michael Laverty and streaked away. After a few laps, Haslam made a mistake which allowed O’Halloran past, and it seemed the Australian might be able to escape with the final podium position; the level of threat to Jason’s third place being presumably determined by the speed of Iddon passing the apparently helpless Haslam.

But that was not the case, and Haslam got the magnets out on the JG Speedfit Kawasaki, and stuck with the pace set by O’Halloran, whilst maintaining fourth position ahead of Christian Iddon.

But it was still Bradley Ray leading Shane Byrne out front, and whilst there was a fair amount of change in the order behind, that of the leading pair was left unchanged until a mistake by Brad Ray on lap 29 of 30, when he ran very wide on the entry to Paddock Hill Bend. At the time it looked as though Byrne was becoming ready to make a pass anyway, but Ray but it beyond doubt.

After the race, Ray explained that he decided to let Byrne go after the mistake, and safely take the points for second place. Duly, Byrne took his first win of the season, and beating Brad Ray in a battle, especially after studying the Suzuki, will have eased any small doubts in Byrne’s mind about beating the youngster, and answered some questions about where the GSXR-1000 is strong and where it has weak points compared to the Ducati.
Perhaps it is worth considering that the two riders who fought at the front today might be the ones who fight for the championship until the end, maybe today was a sign of things to come.

Jason O’Halloran managed to hold Haslam off until the end, and so the Aussie took his first podium of the season, and an important one for the team after Dan Linfoot’s neck injury on Friday which ruled him out of the rest of the weekend. On that point, it was good to see Dan speaking to the Eurosport guys at the end of the race; it’s good to know he’s out of hospital and on the mend.

Christian Iddon seemed to be held up by back markers, a common thing at Brands Indy thanks to the shortness of the layout. Maybe he just lost the time in a more normal way, maybe a tyre drop, but either way the time he lost in the last five or so laps cost him a chance to pass Haslam for fourth and have a shot at the final shot at the podium, and so it was fifth for the ex-supermoto champion.

Jake Dixon took a while to get past Michael Laverty in the first half of the race, and that limited heavily his potential for the race, and could only manage sixth in the end. Glenn Irwin also managed to come through on Laverty, and finished seventh in the end, to continue his promising start to the season.

That left Laverty in eighth, ahead of Bridewell and Hickman who rounded out the top ten. It was promising to see Bridewell up there, considering his tricky preseason, and the assumption that the Halsall Suzuki will improve as the season goes on.

Tarran Mackenzie took eleventh place, which he might be disappointed with after qualifying ninth yesterday, but he showed good pace at the end of the race to come back through from fourteenth, and that is a good sign for the future. Danny Buchan was unable to repeat his race two heroics from two weeks ago, and finished twelfth on the FS-3 Kawasaki. Josh Brookes continued his dismal start to the season with a thirteenth place, but there is still the assumption that the Aussie will eventually find the sweet spot once more with the Yamaha, but there is only so long he can continue to finish outside the top ten before the Showdown becomes out of reach.

Jakub Smrz finished fourteenth whilst the double winner at Brands Indy from last year, in stark contrast to his decent pace in Donington, was only fifteenth, and that was Luke Mossey – a lot of work for Mossey to do before race two.
Thanks to his tyre issues, James Ellison was only able to manage 16th, ahead of Taylor Mackenzie, Mason Law, Gino Rea, Sylvain Barrier, Carl Phillips and Shaun Winfield. The only retirements were Kyle Ryde, who broke down on the first of the warm-up laps, and Richard Cooper who crashed at Graham Hill Bend.

So, an important win for Shane Byrne after a race-long dual with Bradley Ray set up the second BSB race sublimely, where we wait to see whether someone can intervene in the two home riders’ private battle.