Following the highly publicised and race deciding pit lane incident involving Kimi Raikkonen at the Bahrain GP, there has been much debate about whether a change in the pit stop process is needed or whether it’s all part and parcel of F1.

The Ferrari stop had the worst result of the four blunders so far this year after the mechanic was left with a broken leg however, Ferrari were fined in practice for releasing Raikkonen with one of the wheels cross-threaded, something that also ruined both Haas drivers’ races in Australia. These four were all classed as unsafe releases and were caused by the automatic lighting system going green when the car was in fact not ready for release.

Problems like this are inevitable given that the modern day pitstops usually last between two and three seconds, with the record being just 1.923s by Red Bull. Before we delve into the problems of F1 in the present, let’s look back at the evolution of pitstops and accidents that have come about along the way.

The pitstop is something that has nearly always been present in F1, its view is to spice up the racing by adding another element of strategy and teamwork, allowing a car to overtake by under or over-cutting the car in front. Back in the 1950s when F1 was in its infancy, a pitstop was expected to last between sixty and seventy seconds depending on how much fuel was needed. When refuelling was banned in 1984, pitstop times plummeted as only the tyres now needed changing but, the drivers were forced to conserve fuel and the racing suffered as a result.

Ten years later in 1994, refuelling was reinstated which pushed pitstop times back up but made the racing more captivating and improved viewing figures. Throughout the 2000s, pitstops lasted between six and twelve seconds, again depending on the amount of fuel needed by the car before refuelling was banned for the final time, to date, in 2010. There was talk of bringing it back for 2017 but that idea was soon rejected, leaving pitstops to fall to an average of two to three seconds.

Times have fallen for a number of reasons; refuelling is obviously the biggest changer, in addition to this, the number of people working on the car has increased massively to around 21 while automated systems aim to cut out as much human reaction time as possible.

This development is all well and good, very short pitstops mean that any mistakes are amplified when the cars return to track with many races being won or lost solely by the activities of the pit lane. However, the road to these ‘blink and you miss it’ pitstops has been, and continues to be, a very bumpy one which has been littered with various pit lane accidents and mishaps.

Probably the most infamous of these happened when refuelling had just been re-introduced back in 1994. If you haven’t guessed already, this was when Jos Verstappen’s Benetton went up in flames during his pitstop at Hockenheim. The car was refuelled as normal but as the fuel hose was removed, around three litres of fuel escaped, covering the car and crew in flammable liquid which was then set alight by the hot brake discs. Thankfully, everyone escaped relatively uninjured but it was a stark reminder of just how dangerous pitstops can be.

During the 2000s, there were various incidents of drivers taking out members of the pit crew either on entry or exit of the pit box. This happened at Brazil 2007 when Kazuki Nakajima took out most his crew on his very first pitstop and again when Kamui Kobayashi hit four members of his crew in 2012. Romain Grosjean was another to do this when he locked up his brakes and hit his front jack-man during the 2015 Spanish GP.

There were two very infamous incidents of drivers leaving with the fuel rig attached in 2008 and again in 2009 with Felipe Massa at Singapore and Heikki Kovalainen at Brazil, the latter of which caused a small fire in the pit lane and on the car behind, Raikkonen. These, along with other incidents, amounted to refuelling being banned once more in 2010.

In more recent memory, there have been occurrences of drivers leaving the pit box with wheels not attached, either at all or not properly. Mark Webber did this in 2013 at the Nurburgring when his loose wheel bounced down the pit lane and hit a cameraman, leaving him with a broken shoulder and cracked ribs.

At Melbourne 2018, both Haas cars left the pit lane with cross-threaded wheel nuts, ending both their races shortly after. The FIA handed out a 5,000 Euro fine for each incident to the American team but that was nothing compared to what Ferrari received for the next incident.

Raikkonen had come in for his second stop at the Bahrain GP when one of his rear tyres failed to come off. The automatic lighting, unbeknown to the mechanics still working on the car, showed green and Raikkonen left the pit box, hitting the mechanic stood in the path of the rear wheel. That mechanic, Francesco Cigorini, suffered a broken leg while Ferrari were handed a hefty 50,000 Euro fine.

All of this has drawn scrutiny on the current pitstop procedure, they are so fast that there’s no time to flag up and address errors before the car leaves in an unsafe condition. So, if change is needed, what are the possible solutions? 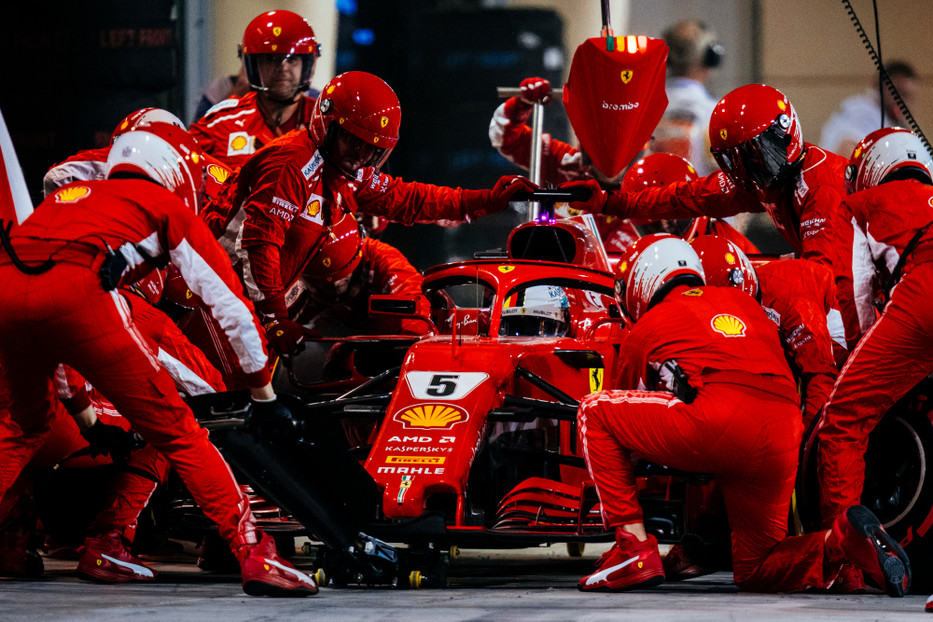 F1 could simplify the process by having less people working on each wheel, as seen in both Formula 2 and IndyCar. These both have just one mechanic to each wheel and have a mechanic who signals to the driver when the car is ready to leave, meaning that unsafe releases are much less common or though do still happen.

Another solution would be to keep the pitstops as is but replace the automatic lighting system with a lollipop-man (or woman!) who can clearly see if the car is ready or not. This seems to be the most reasonable solution.

A much less popular one is that of a minimum pitstop time, as was present in Formula E. However, something like this would not be accepted by the F1 paddock as it just isn’t what F1 is.

On balance, the most appropriate next move for the FIA would be to ban the lighting system, which has caused problems for its whole duration in F1, and have it replaced by a lollipop-man. Whether that will happen or not remains to be seen.