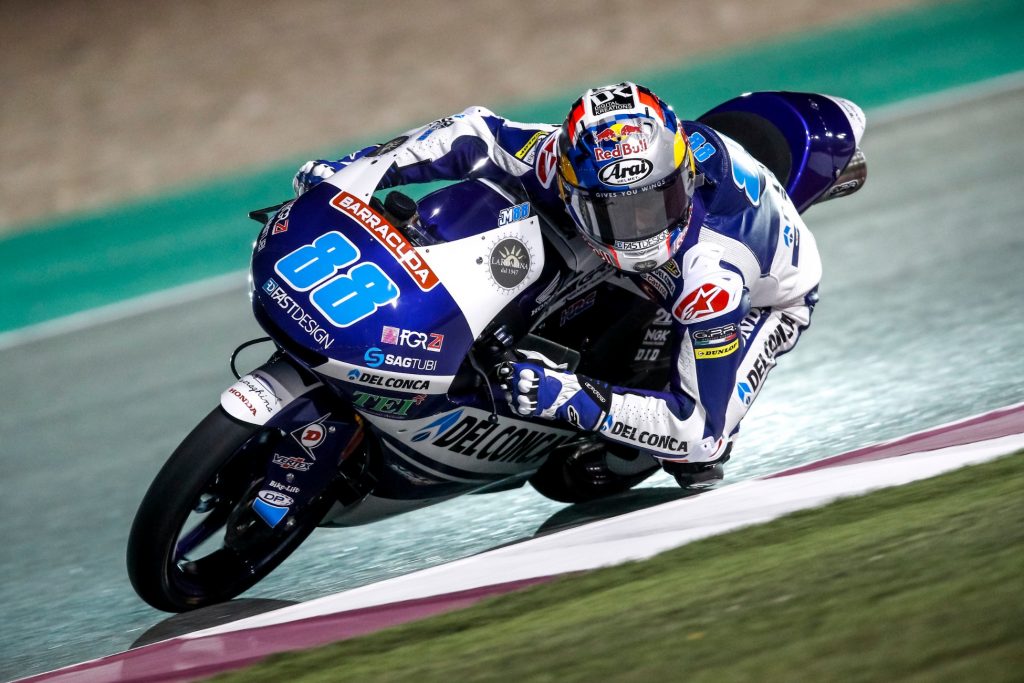 For the first race of the 2018 Moto3 World Championship, there was an air of familiarity about the first six laps. The 2013 season saw three in a league of their own: Luis Salom, Alex Rins and eventual series champion, Maverick Vinales. That season all three were on KTMs, the dominant package at the time, and shared all bar one of the wins of 2013 between them (Alex Marquez won the Japanese Grand Prix when both Rins and Salom crashed). This year, the three riders who have shown themselves to be a step ahead of the rest of the field are Jorge Martin, Aron Canet and Enea Bastianini, all on Honda machines.

This weekend, Martin looked almost in a class of his own, with only Bastianini regularly challenging him, but The Beast qualified down in tenth, and with Canet down in seventh on the grid, it looked like Gresini Racing’s Martin would have a chance to break from the group early on in Sunday’s eighteen lap race. This is what he tried to do – by the time Bastianini arrived at the head of the chasing group, in second place, Martin was already 1.5 seconds in the lead, and to make things more difficult, Bastianini would have to negotiate Canet at the same time as closing the race leader. Nonetheless, within two laps, the chasing pair had caught Jorge, and Bastianini hit the front at the beginning of lap five, breaking Martin’s leadership for the first time in the race. Entering lap six, though, and the two Spaniards re-passed Enea, and in his ambition to stick with Martin, the Italian crashed out of the race at turn six, losing the rear initially, which sent him a little offline, and then folding the front. La Bestia was unable to re-join, and so leaves the first race of the season already way off the pace in the championship.

Canet and Martin continued their private battle for the lead, and throughout the race made it increasingly more exclusive, stretching out a gap of nearly seven seconds to the chasing pack by the end of the race.

The younger of the two, Canet, made a very curious race, almost never leading, despite failing to detach himself from his compatriot’s rear tyre from the moment he gained contact. Canet would sit up at the end of the straight every lap, roll off the throttle so as to not pass Martin, and not show his hand. The one time when Aron did take over the leadership of the race, it was due to a mistake from Jorge, who ran wide at turn one, but after one lap the Gresini Honda had re-passed the Estrella Galicia Marc VDS version.

Canet was clearly waiting for the final lap, to slipstream Martin to the line, and there is a question mark over whether Canet was failing to pass his fellow Spaniard by the line on purpose to try to trick last year’s Valencia race winner into a false sense of security. Either way, the plan for Canet did not work, as Martin edged the victory by 0.023 seconds to deny Canet’s slipstream attempts. Perhaps Canet’s race was ruined by the Honda, which seems to give very little slipstream to the rider behind – this seemed visible in the race, and also through practice.

It was not just the battle for the front that was very unusual for Moto3 – the battle for the final spot on the podium was distinctly unpopulated, with only six riders fighting for third for most of the race. The six were Lorenzo Dalla Porta, polesitter Niccolo Antonelli, Gabriel Rodrigo, Jakub Kornfeil, Ayumu Sasaki and Marco Bezzecchi, but were then joined by John McPhee, Kaito Toba and Fabio Di Giannantonio in the final laps. The fight was fierce, and it was inevitable that at least one of the riders would unfortunately not make the finish. John McPhee was the victim, clipping Sasaki’s Honda in the penultimate corner, taking him out of the race.

Marco Bezzecchi also had an undeserved crash earlier in the lap at the dreaded turn six, where he folded the front. Fortunately for the big Italian, though, he was able to remount and took two points for fourteenth on his debut for the Pruestl GP team.

Lorenzo Dalla Porta won out in the battle for the podium, beating home compatriot Nicco Antonelli in the run to the line by 0.045 seconds on the 2016 Moto3 Junior World Champion’s debut for the Leopard Racing Honda team, a welcome gift after the disaster of Bastianini.

As implied it was Niccolo Antonelli who was the first of the non-podium finishers to cross the line – a positive result on his SIC58 Squadra Corse debut, and one he will hope to build from in the future.

Gabriel Rodrigo was the first KTM home in fifth, which shows the continuation of 2017’s trend of Honda dominating the lightweight class.

Fabio Di Giannantonio fought back well from a poor qualifying and underwhelming start to take sixth place, 0.030 seconds ahead of Honda Team Asia’s Kaito Toba, who sort of arrived in the battle for the podium from nowhere, but nonetheless fought well to take what is by far his career best finish.

Toba beat home fellow Japanese Ayumu Sasaki who finished seventh, ahead of the KTM of Jakub Kornfeil, who made a return to the top ten after a couple of difficult seasons with the Sepang International Circuit team.

The top ten was rounded out by another KTM (although that is still only three Austrian bikes inside the top 10 compared to seven Hondas), this time belonging to Andrea Migno, who made a decent debut for the Angel Nieto Team, finishing under one second away from the podium. He was followed sensation Jaume Masia.

Dennis Foggia ended his full time Grand Prix debut 0.069 seconds off the final point, but will be disappointed to be 26 seconds off the win, nonetheless. Tony Arbolino was a further 6.5 seconds back of Foggia, with Nakarin Atiratphuvapat and Makar Yurchenko rounding out the nineteen finishers.

That leaves seven riders unclassified: John McPhee, rookie Alonso Lopez, Livio Loi, Nicolo Bulega who is still struggling with his ankle injury from last season, the aforementioned Bastianini, Philipp Oettl and Darryn Binder, who made contact with the German.

Whilst the opening round of the 2018 Moto3 season was by no means a classic, it perhaps did show the pattern the season will follow: three riders a step ahead of the rest of the field fighting for the championship. For sure, the other riders will be fighting also at the front of the races, but it will be Jorge Martin, Aron Canet and Enea Bastianini who will fight for the world title, and their battle will continue in Argentina in three weeks’ time.