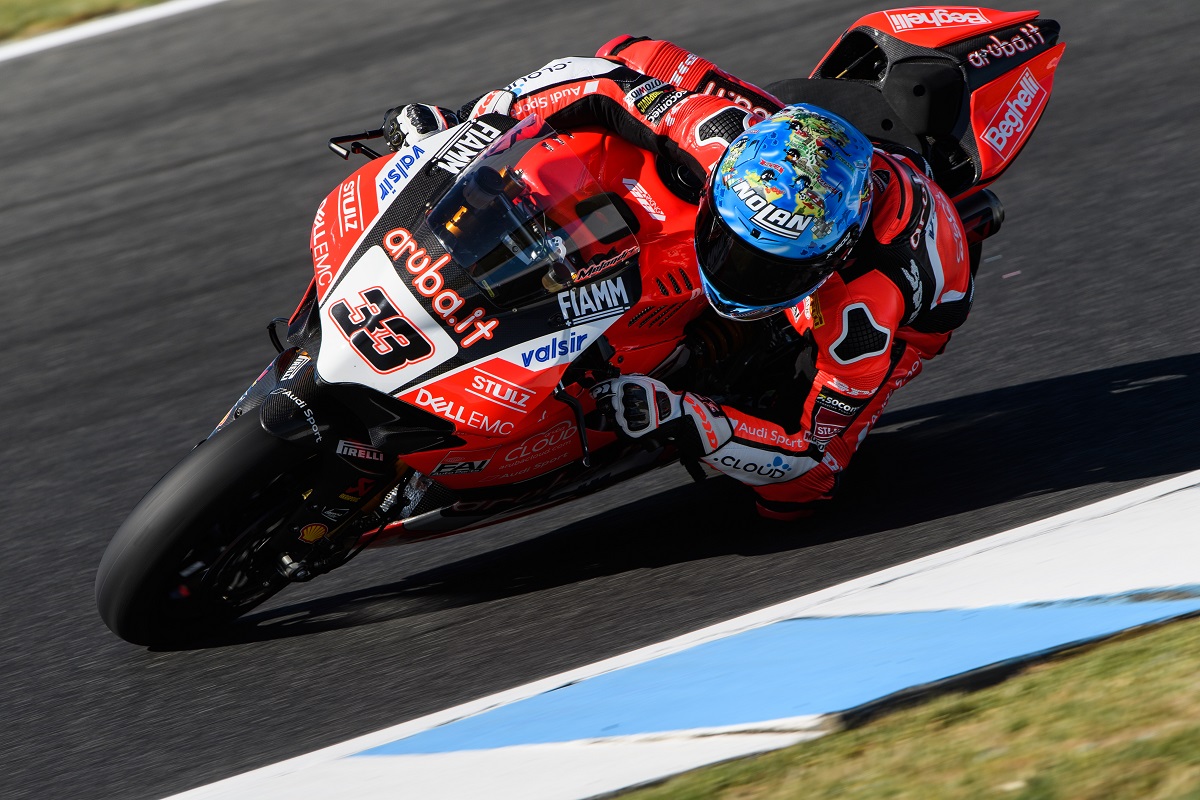 Marco Melandri turned back the clock on Saturday, leaving the field in his wake at the Phillip Island Circuit.

A colder than expected track temperature, along with regular gusts of wind rolling in from the Bass strait, ensured that maintaining a smooth rhythm was nigh on impossible for the riders.

The Italian produced a brilliant tactical performance. Content enough to sit behind his rivals in the first half of the race and managing his machine to contend with the testing track conditions, enabling him to produce an irresistible charge in the closing laps whilst the others floundered. The icing on the cake being a perfectly executed block pass through the high speed Doohan corner and under heavy braking into the Southern loop, on Tom Sykes during the penultimate lap.

A new season, with a raft of new regulations, filled riders and spectators with optimism that the new season would be more competitive than the last. The bright green KRT machine of Sykes on pole threatened to suggest otherwise.

The Yorkshireman made a brilliant start as the lights went out, hooking up the start and pulling a relatively healthy lead out to the rest of the field in the opening laps. A solid practice day on Friday had been backed up by a stunning performance in Qualifying on Saturday morning. The warning signs for the rest could not have been more ominous.

Jonathan Rea (Kawasaki Racing Team) led the chase behind, with the triple world champion in no mood to go down without a fight. Following in hot pursuit as always, were the two factory Aruba.it Ducati bikes of Melandri and Chaz Davies. The trio would dice with each other throughout the 22 laps, gradually closing the lead to Sykes.

The cold temperatures additionally brought another problem for the teams – tyre wear.

It was a case of what might have been for Rea as late in the race he was forced to drop back and out of contention of the podium battle. He would eventually finish behind Spanish rider Xavi Fores (Barni Racing Ducati) in fifth place. After the race, a quick look at his rear tyre explained the problem. The slick rubber had been worn almost through to the carcass. However, Rea’s problems were not as evident with the remaining podium contenders as the factory Ducati rider (Davies) and the privateer machine of Fores engaged in a gripping battle, with both riders exchanging places at almost every corner. Davies emerging with the bragging rights after shutting out his rival at the bottom of the infamous Lukey Heights corner.

Behind the top five there was action to be found in abundance. The two Pata-Yamaha team-mates, Alex Lowes and Michael van der Mark, were locked in thrilling race long duel. Although in the closing stages, the latter rider was forced to drop behind and conserve what little rubber was still attached to his rear tyre, eventually finishing in P9. In contrast, Lowes managed to hold on to sixth place suffering noticeably less tyre wear than most of the competition. His smooth riding style, which has helped him to back-to-back Suzuka 8 hour wins a clear factor.

The the Red Bull Honda team, the opening race on Saturday confirmed that the team has made an incredible amount of progress since 2017. Leon Camier finished an eventful race in seventh place – and 21 seconds behind the winning time of Melandri. The veteran British rider found himself locked in a brilliant scrap early in the race with Eugene Laverty (Milwaukee Aprilia), Loris Baz (Gulf Althea BMW), Leandro Mercado (Oretac Racing Kawasaki) and Jordi Torres (MV Agusta). The latter unfortunately crashing out with only 3 laps left in the race, but both he and his team can take considerable encouragement with the pace and reliability shown across the weekend.

It was a solid day for Laverty, however. The Irishman had been the bolt from the blue earlier in the day, by qualifying on the front row of the grid in second place. Whilst it was inevitable that the Aprilia dropped back during the race, the former MotoGP rider did not surrender any places without a fight. Whilst the TV cameras may have been more interested in the battle for the podium, the dicing between Laverty, Lowes and Camier were not for the faint hearted. The raw pace is there to make Laverty competitive this season, of that there is no doubt.

But the day undoubtedly belonged to Marco Melandri. The Ducati man had looked competitive since the first practice session on Friday morning. A front row start and stunning charge ensured he could not be denied the first blood of the 2018 season. Additionally, this win puts the Italian on 21 victories in the World Superbike class – equal to that of his illustrious compatirot: multiple Grand Prix race winner and double Superbike World Champion, Max Biaggi.