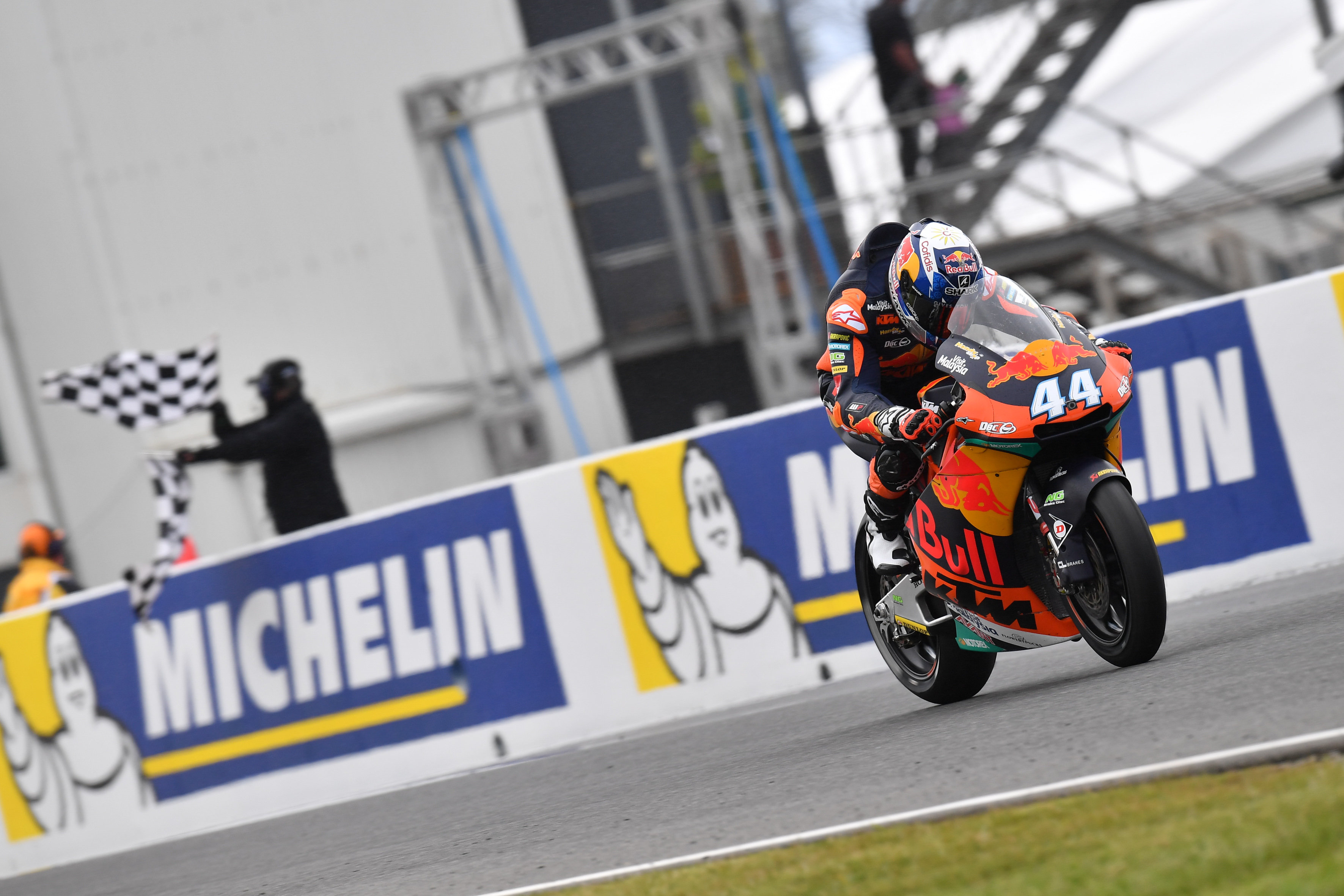 Miguel Oliveira took the Australian GP by storm, taking his first Moto2 victory by three seconds to take KTM’s first win in Moto2. The record breaking continued behind, as teammate Brad Binder took his first ever podium in the intermediate class as his rookie year continues to get better, following a tough, injury-hit start to the season. This was South Africa’s first podium in the intermediate class since Mario Rademayer in 1985, in South Africa. Franco Morbidelli was third and maintained his title aspirations, extending his lead in the title race on main rival Tom Lüthi, who had a tough day to come home tenth, following two big crashes through the weekend.

Oliveira who took the hole-shot down to turn one, with pole-sitter Mattia Pasini losing out and Binder moving up into second. Pasini was as low as 7th after a tentative start. Morbidelli slotted into third, with Dominique Aegerter moving into fourth. Lüthi got a good start and shot up into sixth, moving around the outside as he attempted to get in the fight at the front of the field from way down on the grid.

The pack then started to swap places but a massive crash for Marcel Schrötter collected Pasini and sent Aegerter out on the grass – as Oliveira started pulling away at the front. The crash continued Pasini’s run of never scoring a point at Phillip Island in the intermediate class. Morbidelli’s teammate, Alex Marquez, had a huge moment as Lüthi began to struggle. The top three of Oliveira, Binder and Morbidelli found themselves in clear air. Morbidelli and Binder started swapping places, handing Oliveira an advantage of six seconds with seven laps to go.

Takaaki Nakagami was the man on the charge in the middle of the race, closing in on the leading three before passing both Binder and Morbidelli. The South African and the Italian exchanged some tough passes and spectacular moves yet again, in what looked set to be a hard-fought battle over the last place on the podium. However, it began to rain, meaning the rain flag came out near the end of the race. Oblivious to the situation, Nakagami slid out at Lukey Heights as he chased down Miguel Oliveira. The Portuguese rider crossed the line almost three seconds clear, with Binder setting the fastest lap on the penultimate lap to take second and Morbidelli a safe third.

Jesko Raffin was an extraordinary surprise in fourth, ahead of yet another fine performance from Motegi podium finisher, Xavi Vierge. Alex Marquez recovered from his moment early in the race to take sixth, ahead of veteran Italian, Simone Corsi. Swiss rider Dominique Aegerter rode a solid race after drama early on, finishing ahead of Sandro Cortese and a struggling Lüthi.