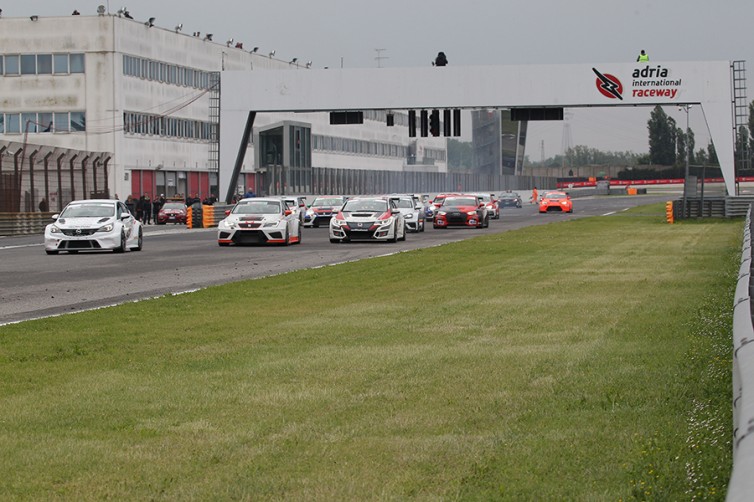 TCR drivers from all over Europe are bound for Adria

The 2017 TCR Europe Trophy will be awarded this weekend in a one-off event at the Adria International Raceway.

Drivers who have raced in the various TCR series and championships all over Europe are eligible to take part in the Italian race meeting and those who have entered have been allocated Pre-Qualifying points based on the number of TCR appearances they have made during the season.

The Adria International Raceway is located in the North-East of Italy, in the delta of the river Po, some 60 kilometres South of Venice. It was inaugurated in 2002 and has hosted a range of international races such as the FIA GT and ETCC and the DTM.

It was there that TCR Italy ran the opening event of the current season, when Eric Scalvini won both races at the wheel of a MM Motorsport Honda Civic.

The format of the TCR Europe Trophy will follow the same pattern as the TCR International Series, with two 30-minute Free Practice sessions on Saturday morning and the 30-minute Qualifying on Saturday afternoon that will be split into Q1 (20 minutes for all the competitors) and Q2 (10 minutes for the 12 fastest drivers in Q1). The two 60-kilometre races will be run on Sunday.

Drivers will also have the opportunity to take part in three test sessions on Friday.

TCR in Adria – The event at a glance

Grids: Determined by the Qualifying results (Q1+Q2) with top 10 reversed for Race 2

all times: GMT +2 until Saturday; GMT +1 from Sunday

How Drivers’ and Team’s Trophies will be awarded

Two TCR Europe Trophies will be awarded at Adria; one for Drivers and one for Teams.

– Pre-Qualifying: 1 point per event will be allocated to each Driver who took part in any   TCR event during the 2017 season, up to a maximum of 5 points

– Qualifying: points will be awarded to the first five drivers classified in the Qualifying session according to the following scale:

– Races: points will be awarded to the ten drivers classified in each Race according to the following scale:

– Races: points will be awarded to the best two cars of each team classified in each Race according to the following scale:

Eight brands to be represented at the TCR Europe Trophy

The Adria International Raceway will welcome drivers and teams coming from no less than nine different series.

Files and Altoè pair up at Target Competition

Target Competition fields the strong duo of Josh Files and Giacomo Altoè at the wheel of two Honda Civic cars.

Files is aiming for a third TCR title in the current season after winning both the Middle East and Germany crowns (the latter for the second consecutive year), while his 17-year old teammate Altoè has established himself as one of the most competitive young drivers with brilliant results in the International, Benelux and Italian series.

One Peugeot 308 for Aurélien Comte

Two weeks ago at Le Castellet, Peugeot Sport showed for the first time the new 308 TCR that will be racing from next year. However, even without the full TCR kit, the Peugeot 308 Racing Cup car has already won TCR races in the Benelux and 24H series.

The twisty circuit of Adria will suit the French cars that will be in the experienced hands of Aurélien Comte, who classified fifth in the TCR Benelux with three race victories.

Buri and Kangas come from the North

Buri comes fresh from a successful campaign in TCR Germany that saw him claiming one race victory at the Nürburgring and finishing a brilliant eighth in the Drivers’ championship.

Far less experienced than his teammate, Kangas has competed in the maiden season of TCR Scandinavia.

Together, they have won the 12 Hours of Spa-Francorchamps, final round of the 24H Touring Car Endurance series a few weeks ago.

A Russian duo for Innocenti-AMG Motorsport

Grigoriev was classified tenth in the Russian series, claiming his maiden TCR victory in Race 1 at the Smolensk Ring; his teammate Tolkachev ranked 13th in the final standings.

The age of the two drivers entered by the Liqui Moly Team Engstler adds up to just 38 years. Luca Engstler (17) and Florian Thoma (21) form the youngest team that will compete for the TCR Europe Trophy.

And yet, they have already shown their potential. After winning his maiden touring car race at Dubai in the TCR Middle East series, Engstler was crowned Junior champion of TCR Germany. Also a rookie in touring cars, his Swiss teammate Thoma made a sensational debut in TCR Germany, winning the second race in the season’s opener at Oschersleben. Engstler and Thoma will race two Volkswagen Golf GTI cars.

The 35-year old from Bari is an experienced driver who has already had different occasions of sitting at the wheel of TCR cars. Ferrara has driven the V-Action Giulietta twice this year, in the German and the Italian series (at Hockenheim and Monza respectively), showing the potential of the Italian car.

During the last weekend, Francisco Abreu was crowned the first champion in the TCR Ibérico series.

Winning two of the four races of the final event at Portimão in the Team Novadriver Volkswagen Golf GTI cars, Abreu was able to close the gap from the previous leader Francisco Mora to clinch the title. He also finished second in TCR Portugal behind Mora.

While Team WRT is in the best position to win a second consecutive TCR International Series title in conjunction with Leopard Racing, the Belgian outfit is also one of the top seeds in the TCR Europe Trophy.

The young Belgian Maxime Potty will be at the wheel of the team’s single Volkswagen Golf GTI at Adria. Last weekend at Assen, Potty won the final race of TCR Benelux, securing third place in the championship standings.

It has been a very successful season for Monlau Competición as the Spanish team has clinched the TCR class title in the 24H Touring Car Endurance Series with a SEAT León DSG car.

At Adria, Monlau Competición wants to prove they are also capable of shining in sprint races and have entered the León for their best driver, José Manuel Pérez-Aicart. Experienced and quick, the 35-year old from Castellón boasts an impressive record, including titles in the Spanish GT Championship and the SEAT Supercópa.

Kralev, who switched to touring car racing three years ago after several season in GT and Formula 2, has successfully taken part in both TCR Italy and the FIA European Touring Car Cup with his Audi, ranking fifth and ninth in the two series respectively.

Hyundai and Subaru cars will be ‘transparent’

Two cars have been accepted to take part in the TCR Europe Trophy under temporary homologation forms: the Hyundai i30 N and the Subaru WRX STI.

Therefore they will be ‘transparent’ as far as the race results are concerned.

BRC Racing Team will run the Hyundai that will be driven by Touring Car legend Gabriele Tarquini; only a few weeks ago the Italian racer gave the Korean car its first victory on its maiden appearance, in the TCR International Series at Zehjiang.

The Subaru entered by Top Run Motorsport is the latest development of the WRX STI TCR that was successfully raced by Stefano Comini in the TCR Italy events at Imola and Monza. As Comini is not eligible to race at Adria (being amongst the top ten in the International Series) the team has still to name his replacement.

Fans will be able to follow live on the Internet the whole action of the TCR Europe Trophy at Adria on www.europe.tcr-series.com and www.tcr-series.tv according to the following timetable.