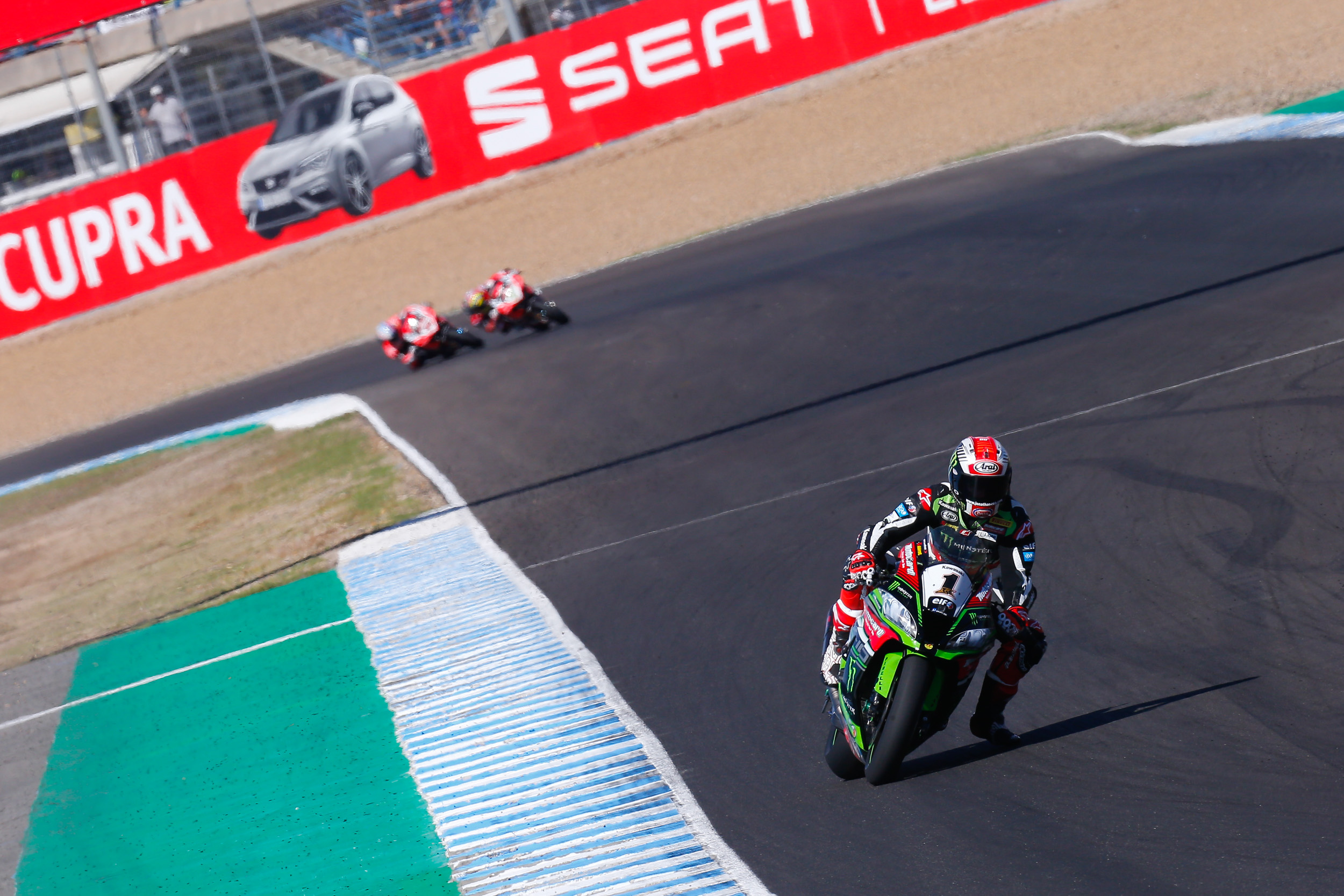 The Spanish WSBK round saw triple World Champion Jonathan Rea take victory in race 2 on Sunday to complete a fine weekend at the Jerez circuit, achieving a double overall. A commanding performance in a restarted World Superbike race at the resurfaced venue gave Rea maximum points – as he was joined on the podium by Marco Melandri and Chaz Davies.

A red flag had been brought out after first lap incidents in the first part of the race. This saw Chaz Davies and Eugene Laverty both crash at turn two and then wildcard Dominic Schmitter requiring medical treatment at trackside after crashing heavily on the Suzuki GSX-R1000.

On the restart, Northern Irishman Rea notched up his 13th double win since joining Kawasaki at a venue where he had not previously won at before. He also levelled with fellow three-time champion, Troy Bayliss, in terms of number of wins in his career.

The Kawasaki rider was riding in a cool and confident style, having sealed the deal on an unprecedented third successive title two weeks previous in France. Rea stormed through from ninth on the grid to first place by the end of the first lap, overtaking Michael van der Mark cleanly at the second attempt to remain at the front from early in lap two.

Rea crossed the line 2.7s seconds ahead of Melandri at the chequered flag, who got the better of his teammate Davies in the latter stages of the second outing. The result meant that Kawasaki as a manufacturer were the constructors champions once more.

There were other battles throughout the pack with Alex Lowes finishing fourth and Tom Sykes fifth This was Sykes’ first 5th at Jerez since race two in 2015. van der Mark finished sixth having lead on the opening circulation, also having had an incident with veteran Melandri early in the race.

Home hero Xavi Fores was seventh and top Spaniard, after a good battle with returning 2014 World Superbike Champion, Sylvain Guintoli. Frenchman Guintoli, who has won a race in British Superbikes for Suzuki this season, will also ride for Puccetti Racing at the final round of the season in Qatar next month. It is expected that he will ride full-time for the team next season. Leandro Mercado and Jordi Torres rounded out the top ten.

Davide Giugliano was handed a ride through penalty for speeding in pit lane, having been forced to return to his garage due to a technical issue. He eventually finished 17th, after suffering a DNF on Saturday in race one. Race one was the first time that no Honda had finished in the points since Donington Park, race one, this season. Lorenzo Savadori was 18th after he crashed out on the first lap of the restarted race, compounding a disastrous weekend for Shaun Muir’s Milwaukee Aprilia outfit.
Image by: worldSBK.com