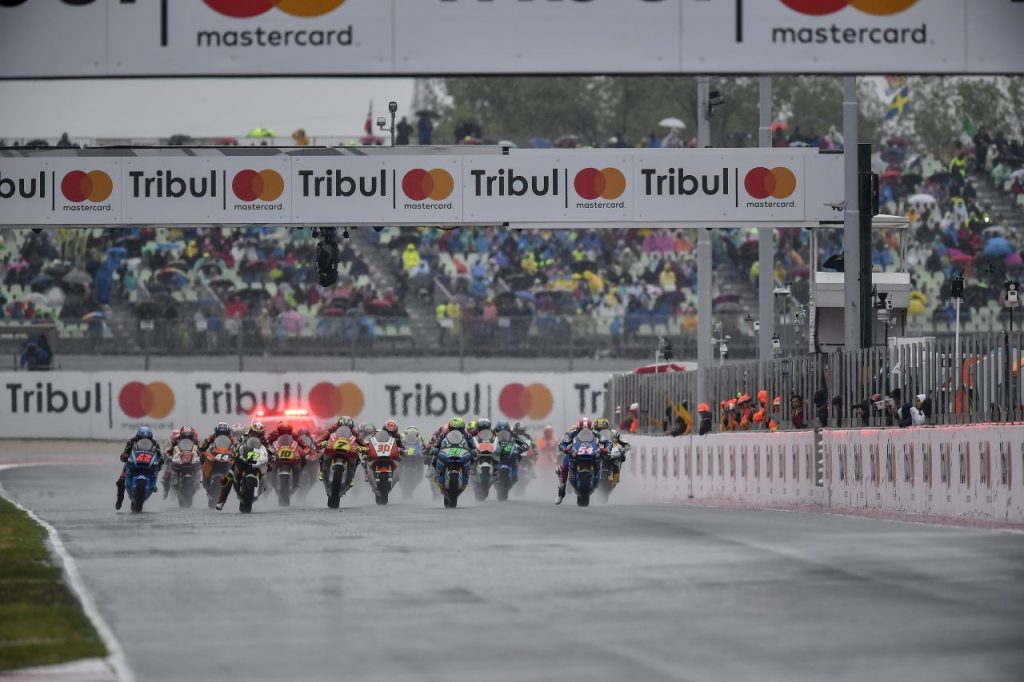 Moto2 arrives in Spain for the third time this season, at the MotorLand Aragon circuit for the 14th round of 18 in the championship. Franco Morbidelli had his lead in the championship well and truly savaged by Tom Luthi last time at Misano, after he crashed and the former 125cc champion finished 2nd. We head into Aragon – a circuit that neither rider has won at before – full of expectation of a fiery dual in the middle of the Spanish desert.

Franco Morbidelli looked like he was starting to inch closer to Italy’s first intermediate class championship win since Marco Simoncelli in 2008 before throwing it all away early on at Misano. The rider with seven victories so far in the championship now only leads Tom Luthi by nine points. Morbidelli was on the podium at Aragon in 2016 – the result kickstarted a run of form that would see the 22-year-old feature on the podium in every race up until Jerez this season. Another win for Morbidelli would see him go just one away from Marco Melandri’s nine intermediate class victories achieved, back in 2002. Will Morbidelli become the first Italian to win at Aragon in Moto2 since Andrea Iannone, in 2010?

Tom Luthi will be trying to stop him. The Swiss rider has just one DNF to his name and is proving that consistently finishing in the top four pays dividends. Luthi was 4th at Aragon last season, his best result at the circuit. Luthi’s last win in Spain was at Valencia in 2014 but he has never scored a podium in the race straight after the San Marino GP. Will Aragon break that chain? Luthi won at two of the remaining races last season so it may not be essential for him to take victory this weekend. Will a cool head be best in this high-pressure situation?

Alex Marquez missed the San Marino GP after a huge crash on the Friday free practice day. The Spaniard will be making a return to action this weekend and although a shot at the championship seems to have faded away, he now needs to keep hold of this place. Marquez was 2nd at Aragon last season and also 2nd in 2014 on a Moto3 bike. Along with that, the former Moto3 champion has won both races that have already been held in Spain this year and will be hoping to become the first Spanish rider since Dani Pedrosa in 2005 to win three Spanish races in an intermediate class year.

Miguel Oliveria has been nothing short of outstanding in 2017 onboard a brand new KTM. Five podiums place him 4th in the championship, just 14 points behind Alex Marquez. A first win in the intermediate class still eludes him however. Oliveira missed the race last year due to injury but he won the Moto3 race at the track in 2015. A win for Oliveira would see him become the fourth rider to win in two classes at the circuit – Pol Espargaro, Nicolas Terol and Marc Marquez are the current three.

Francesco Bagnaia has the luxury of being top rookie in the Moto2 class this year. He is the only rider to finish every race since Catalunya in the points, an impressive achievement for the Italian. Unfortunately for Pecco, Aragon has proven not to be his most favoured circuit, as he is yet to break into the top 10 in a race there. Bagnaia is only 17 points behind Oliveira in the championship, meaning he is keeping the pressure on as we near the season’s end. Could the VR46 rider crack the top 10 at Aragon for the first time this weekend?

Takaaki Nakagami completes the all-important top six. 15 points behind a rookie is not what we would’ve expected from Taka but he isn’t a million miles away from the top five. Nakagami has scored points in every Moto2 outing at the circuit since 2013 and achieved his best finish last year of 5th. The former Suzuka 8 Hour winner will be desperate to take his second win of the season, which would make him the first Japanese rider since Hiroshi Aoyama to win more than one race in the intermediate class in a season.