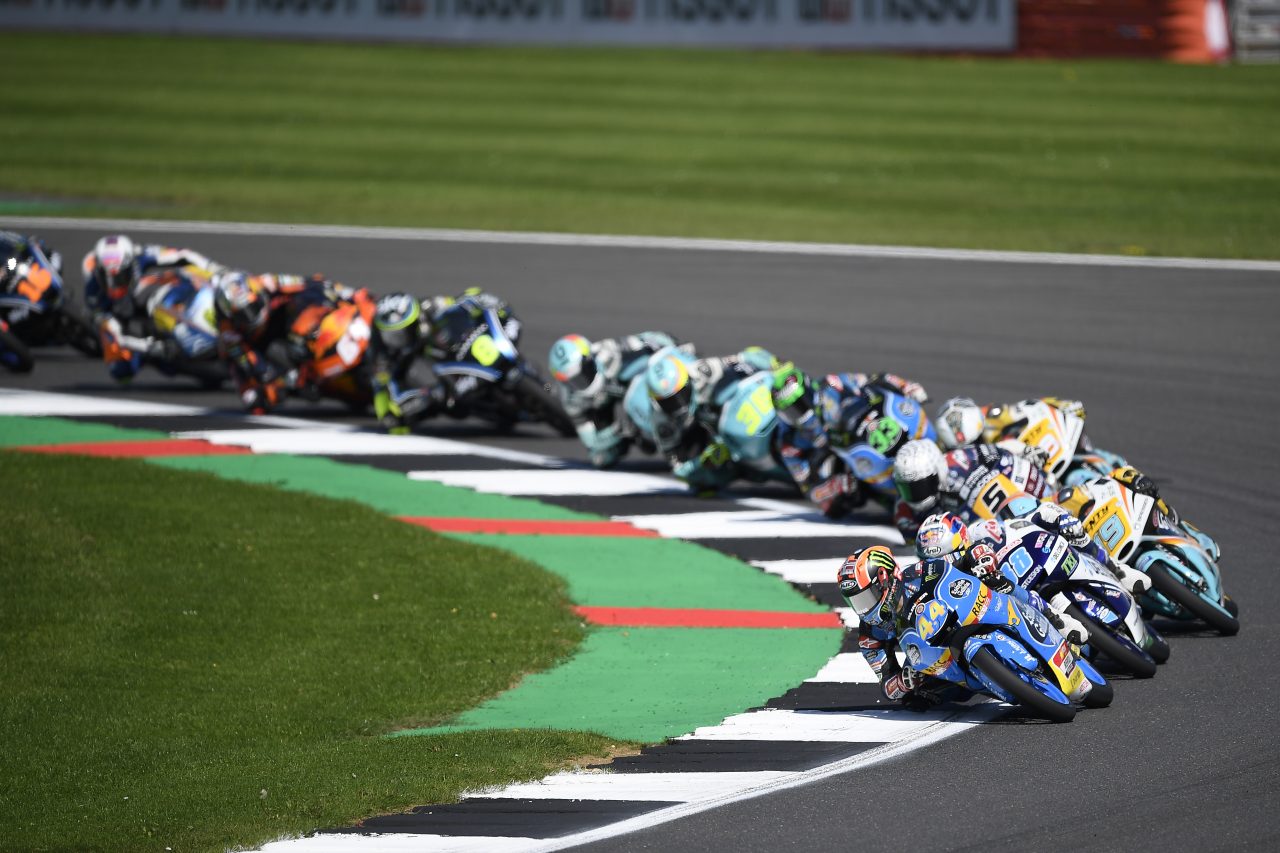 The Moto3 class has a reputation for intense, wheel-to-wheel, “do or die”, “win it or bin it” racing. The 2017 British Grand-Prix was no exception. From lights to flag it was frantic, pulsating, truly thrilling motor racing. Overtaking was to be had at every corner and on every straight. The layout of the Silverstone circuit is ready-made for lightweight motorcycle racing, with very few heavy braking areas enabling the field to stay closely compacted together.

Aaron Canet (Estrella Galicia 0,0) emerged triumphant, but he had to put in the performance of his life. A disastrous showing in Saturday’s qualifying session meant the Spaniard began the race from P16. As the lights went out, he got a super start, making up places with ease. It was not a reckless charge – rather a calculated progression – with every manoeuvre and overtake clean and decisive. Not once was there a moment when Canet looked out of control, or was ever taking unnecessary risks with his opponents or machine. It is true that his bike is one of the best in the field but that cannot take away from the display of exceptional race-craft that the 17-year-old produced.

The lead of the race changing hands more times than there were laps raced. The usual championship suspects came to the fore. Romano Fenati (Marinelli Snipers) bullied his way to the front during the opening laps, whilst series leader Joan Mir (Leopard Racing) and wounded warrior Jorge Martin (Del Conca Gresini) were constantly snapping at the heels of any rider who was ahead of them. The latter continues to amaze all and sundry – both in the paddock and those spectating from afar – as he can still barely walk following serious injury sustained during practice for the German Grand Prix back in July.

The race also provided a welcome return to form for Canet’s teammate and class veteran, Enea Bastianini. The Italian threw caution to the wind and produced a vintage display, reminding us all of his race-craft and why he was once tipped as the ‘next big thing’ in MotoGP. His second place finish behind his team-mate (his first podium of the season) was celebrated by his team as much as Canet’s victory.

Unfortunately, fans were denied a grandstand finish as, on the penultimate lap, Juanfran Guevara (RBA Boe Racing) suffered a heavy crash which left him lying unconscious at the side of the track. The red flag had to be shown, as an ambulance was required at the scene. The Spaniard was taken to hospital with concussion but it is believed that the rider sustained no serious injuries.

The red flag was a double-blow for the RBA team, as it had potentially cost their other rider, Gabriel Rodrigo a maiden Moto3 victory (who was demoted from 1st to 4th due to the lap-count-back rule). The Argentine has been the most improved rider this season, shaking off the unwanted title of ‘crash kid’ from last year. A regular at the sharp end during both qualifying and the races in 2017, there is no doubt that Rodrigo will start to win GPs sooner rather than later.

However, it was a truly wretched day for British Talent Team’s John McPhee. Despite qualifying on the second row in P4, a bad start off the line saw him consigned to scrap for the minor points places. The Scotsman has endured some terrible luck this season and after such a strong showing in the build up to the race, finishing in P13 will be a bitter pill to swallow.

Honorary mentions go to the two British wildcard riders – Tom Booth-Amos and Jake Archer (CityLifting RS Racing). Both riders have been running away with the Motostar series, which supports the British Superbike Championship, this year. Before Friday, neither had any first-hand Grand Prix experience, or ridden on Dunlop tyres. Across the weekend, both riders turned heads with immaculate displays. Unfortunately for Archer, his race was cut short with a technical problem 3 laps from the end. Booth-Amos however secured P21, finishing ahead of series stalwarts such as Jakub Kornfeil, Jules Danilo and Maria Herrera. It is hard to imagine that the British Grand Prix will be their last appearance in the class.