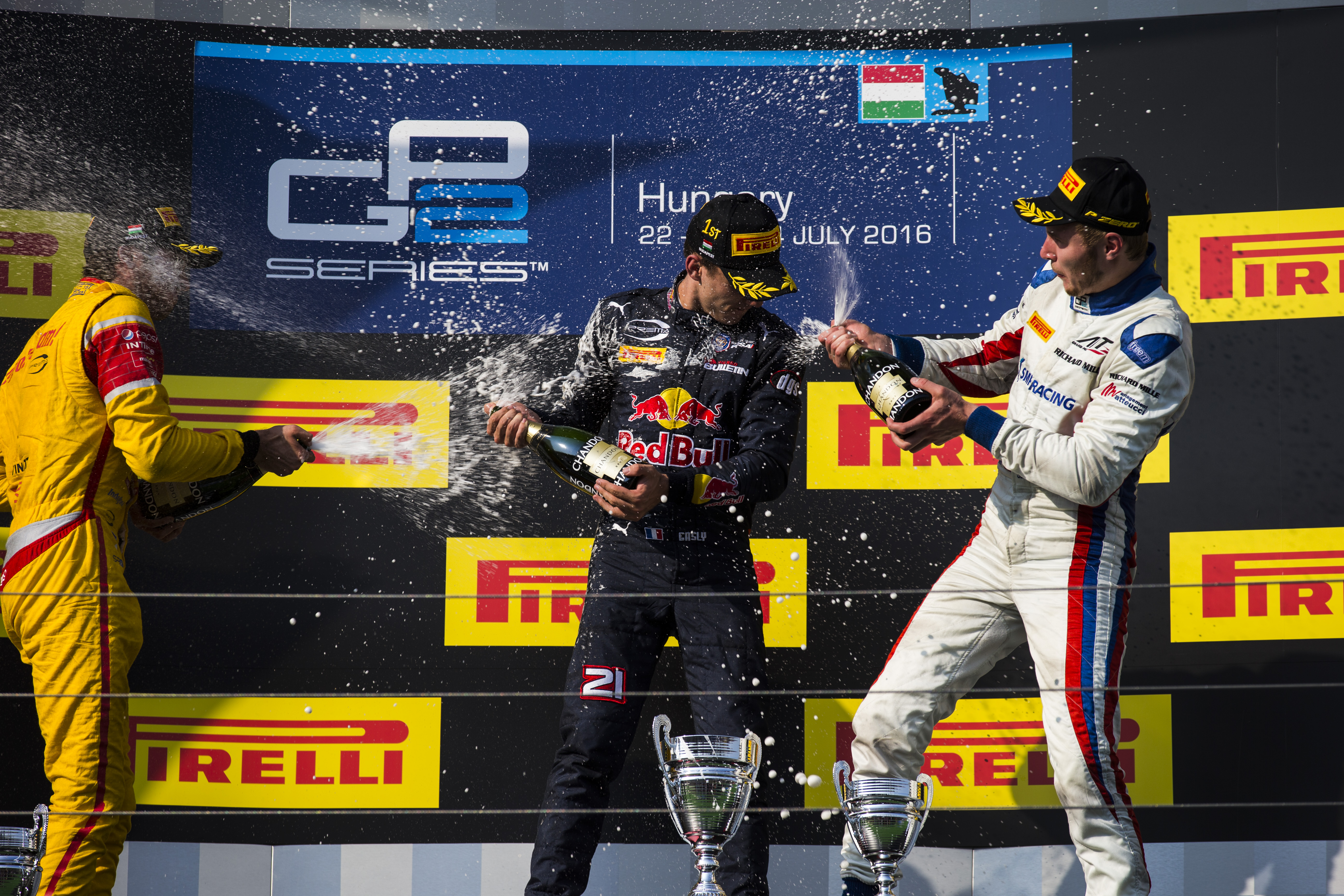 The last round of the Formula 2 season before the summer break takes place at the Hungaroring circuit just outside of Budapest, a track which traces its history back to 1986. We are now past the halfway point in the championship, with Charles Leclerc storming ahead at the top of the driver standings after another strong showing in the two back to back race weekends at Spielberg and Silverstone. But it’s all change in the standings below him, with Russian Time’s Artem Markelov moving into second place, and DAM’s Oliver Rowland falling to third, just three points separating the two drivers. Their respective teammates; Luca Ghiotto and Nicholas Latifi, could very easily come into contention as the season progresses, as they trail not far behind. But if Leclerc continues his prodigious form, then his fellow competitors will have to dig deep to threaten him.

Prema showed impressive form in Budapest last year, with eventual champion Pierre Gasly taking pole and the win in the feature race, and Antonio Giovinazzi coming in second to give the Italian team a double podium. If Charles Leclerc can score his seventh successive pole on Friday, then he will set a new record for the most consecutive pole positions in GP2/F2, inheriting that title from Stoffel Vandoorne. And a good weekend in Hungary would set the young Monegasque driver up well, not only for the month off, but also for the day of testing he will do for Ferrari next week, also at the Hungaroring. While his Prema teammate, fellow Ferrari junior driver, Antonio Fuoco, looked like he had made positive steps forward in Austria, scoring his first podium of the season, another pointless weekend in Silverstone showed he is still a long way off his teammate. Prema have retaken first place in the team standings, but only by three points.

DAMS occupy second in the team standings, with Russian Time just a single point behind them in third. With two of the strongest driver pairings on the grid, it will be a tough fight until the end of the season to see who comes out on top, particularly with their sets of drivers so close together. If Nicholas Latifi had started his season as well as he is performing now, then he may have been up there with his teammate Rowland, but there is still plenty of time for him to close the gap. Meanwhile Russian Time’s Ghiotto is still in search of that race win, but has been stringing together a series of consistent results, perhaps leading many to overlook and underestimate the Italian driver. All four drivers from these teams have certainly proved that they are capable of performing, but it is qualifying that is the area where they are still looking for that perfect result.

After fielding three different drivers in one seat so far this season, Trident announced that Haas development and current GP3 driver Santino Ferucci will race in the number 17 car in Hungary alongside Nabil Jeffri. While the last two drivers to fill that spot; Raffaele Marciello and Callum Ilott were only drafted in for a single round, there is no indication as to whether Ferucci is a permanent addition to the team. The young American driver will be forced to miss this weekend’s GP3 round, but the call up does offer a better opportunity to impress those who have eyes on him in the Formula 1 paddock.

French team ART have the potential to pull off a good weekend in Hungary. GP3 graduate Alexander Albon secured victory at the track last year, and despite his overall weaker season in 2016, Nobuharu Matsushita qualified well at the Hungaroring, and managed to score points in one of his best finishes of the season. Albon will be looking to make up lost ground, his points tally still suffering from missing the round in Baku and a disappointing weekend in Silverstone.

Since moving to Rapax ahead of the Austrian round, junior formula veteran Sergio Canamasas has amassed enough points to move the Italian team into fifth place in the team standings. The Spanish driver scored his best results of the season at the British round of the Formula 2 season, a fifth and a fourth place (helped along a little by Oliver Rowland’s time penalty), and will hope to carry that momentum with him to Hungary. His teammate, Nyck de Vries, however, needs to bounce back from the previous round; one he walked away from almost empty handed. Despite his failure to start the feature race at Silverstone, due to a power problem, his impressive drive on Sunday from the back of the grid to score a pair of points proves that he might already have recovered from a spell of misfortune.

Since their race win back in Baku, Pertamina Arden have improved considerably compared their early season performances. Norman Nato’s podium in Silverstone, and Sean Gelael’s drive from eighteenth to ninth, indicate that this is one team on an upward curve. Nato performed well at the Hungaroring last year, scoring points in both races, and a podium in the sprint race – the kind of results he will want to replicate this weekend.

Down the bottom of the standings, MP Motorsport, Campos Racing and Racing Engineering have floundered in recent rounds, struggling to score more than a few points for the most part. Admittedly, MP Motorsport’s Jordan King has only failed to score points in races from which he has retired or been disqualified, but the handful he has secured is not enough to give his season any momentum. His combined struggles with the team have made for a disappointing season for the Brit, who lined up in Bahrain hoping that 2017 would be his year.

The underperforming is perhaps most disappointing for Racing Engineering, who came second in the team standings in 2016. Despite flashes of form in the early rounds, they have faded to the back of the field. The Spanish team achieved a double podium in the sprint race in Hungary last year and though that kind of result seems highly unlikely, the team could do with replicating some semblance of the form they had last year.

For those in the title battle, the Formula 2 season has very much turned into a game of catch up between Charles Leclerc and the rest of the front runners. But with two races each round, and points for pole positions and fastest laps, the season is deceptively long, and if Leclerc’s form was to slip, especially going into the summer break this weekend, then there is no shortage of drivers snapping at his heels.