Although Lydden Hill Circuit is not too far from our home, it was an early start as we prepared the provisions for our day at World Rallycross, the last one to be held at Lydden Hill.

We arrived in good time and were directed to the media car park behind the grandstands. The swirling clouds had gathered and it looked like our decision to wear summer tops and shorts was a bad one. We had nothing to fear, the sun would shine and shine very bright on this fantastic event and superb circuit.

As soon as we got out the car you could hear the WRX cars in free practice and noise of the engines, not far from us. “Oh my!” Viv said with a smile on her face. She’s a petrol head and I just knew from that opening statement she was going to enjoy today.

The first visit was to the paddock to cast our eyes around the garages and marquees. I saw Janis Baumanis wandering down the pit lane and decided to ask him how he thought things were going. He was in good spirits and appeared happy with how his preparations were going. Baumanis was sitting 9th after the free practice which had been dominated by Solberg and Kristoffersson, Ekstrom a further six tenths behind the PSRX drivers. Bumped into Reinis Nitiss, he smiled and looked upbeat. I also wandered over and spoke with Mattias Ekstrom at the area where they scrutineer the cars. He was his usual smiling self and stopped to have his photograph taken with fans. I thanked him for doing my Quick 10 interview recently and he said it was a pleasure. I wished him luck as I could see he was in a rush to get to his car and I didn’t want to hold him up.

This was Viv’s first time in the WRX paddock so I decided to give her the tour of the circuit. We walked round each paddock in a zig-zag formation, through to the area where they scrutineer the cars and then up to the Monster Energy stage. A quick “pit stop” there to grab some energy drinks and then off round the side of the Canterbury Straight, but through the camp site set behind the trees and at the rear of race control.

We had a great view of the circuit, wandered up on top of the Monster Energy tower and I managed to get my photo taken with a Monster Energy girl, as you do.

The path winds through a beautiful wooded area and if it wasn’t for the sound of the popping, whizzing and cracking of the rallycross cars just metres away it painted a picture of tranquility. We continued to walk up a steep rise to stand behind the joker between Pilgrims and Chessons Drift. The WRX cars were out and we stood just metres away as they came round to practice their joker laps, dust flying up into the air and into the crowd. Mattias Ekstrom nearly lost his back end coming into the joker. That could have been costly!

After grabbing a few snaps we walked into the massive grass car parking area down the side of Dover Slope. The rallycross cars were still flying round but our attention was also drawn to some fantastic spectator cars parked up, Viv, being a massive Ford fan, had her attention drawn to the selection of Ford Focus RS’s and Ford Fiesta’s on display and an Aston Martin. In fact throughout the day I think we visited the garage of Hoonigan Racing Division more times than any other team, not that I minded.

We finished up standing at the North Bend looking down Hairy Hill and it was the RX2 cars who were now skirting round the circuit. The sun was now blazing down. It was time to grab some refreshments.

Once refreshed, I decided to visit the garage of MJP Racing, having interviewed team boss Max Pucher and Kevin Eriksson this week in my build up. Max had told me in a conversation we had to stop by the garage. I spoke to one of the team members who informed me that Max was racing in Italy this weekend. I managed to see Kevin before the qualifying heats, he was standing in front of the television in the team hospitality area studying the times. As he turned I called him and Kevin walked over smiling.

I thanked him for doing the Quick 10 interview questions with me and he said it was a pleasure and he enjoyed the questions. He leant on the barrier and we just spoke informally, it didn’t feel like I was interviewing him, it just seemed like a normal converstaion. He told me he was feeling good this weekend and was hoping for a final slot. Kevin added that with everybody so close together in terms of timing, it was difficult to predict anything right now. I asked him what it was like having Andrew Jordan stepping in as team mate instead of Timo Scheider this weekend. Kevin smiled and said that Andrew was great to be around but it was strange having him as a team mate as he had now got used to Timo being part of the team. Kevin looked extremely relaxed and happy. Not wanting to take up too much of his valuable time, I wished him well, thanked him for his time and we shook hands. A genuinely nice person.

I love wandering around any racing paddock but there is something truly remarkable about the World Rallycross paddock. The teams are friendly, the personnel very accommodating and it is just a really relaxed atmosphere. Knowing that this is going to be the last WRX weekend before the championship switches RX Great Britain to Silverstone did fill me with a little bit of sadness and I truly hope the paddock stays as it is when it moves.

Heading into Q1 the following grid was decided (Pole is situated to the right of the circuit):

The story of Q1 was that Petter Solberg would finish just under a second ahead of his team mate Johan Kristoffersson who was also two seconds ahead of championship leader Mattias Ekstrom. Andreas Bakkerud, Timmy Hansen, Ken Block, Sebastien Loeb, Toomas Heikkinen, Kevin Eriksson, Andrew Jordan, Janis Baumanis and Timur Timerzyanov would make up the top twelve, the drivers who after all four qualifying heats would make it through to the semi-finals.

Reinis Nitiss received a thirty second time penalty for not taking his joker lap and Niclas Gronholm had a terrible accident after his car rolled several times exiting onto the Dover Slope. The driver emerged from the car unscathed and scrambled over the barriers to safety.

The grids for the second round of qualifying read like this:

In Q2 it was business as usual for the three fastest drivers from Q1 who held those positions again with Solberg, Kristoffersson and Ekstrom leading the way. Ekstrom was still two seconds off the Polo pace and he must be wondering how to claw that gap back. Solberg, as always, enjoys Lydden Hill.

“It’s not easy,” said Solberg afterwards. “it’s quite a special track, but it’s a fantastic feeling. Some improvements we have done from the last race have made me more comfortable and faster. It’s great, to be fastest on this track is always a dream and I’m happy I must say.” Petter then eluded to his team mate. “Johan has also done a fantastic job, so a good team effort again.”

The GRX mechanics worked quickly and superbly on Gronholm’s wrecked car from Q1 and the Finn managed to put his car into 10th. Reinis Nitiss retired after contact with a barrier at the first corner.

We had been sitting at the joker when Nitiss collided with the barrier and came to a grinding halt. There were a large group of Latvian supporters next to us and they groaned. Nitiss climbed out the car, hopped over the barrier and sat down on the grass watching the remaining cars complete the race. He had his head in his hands and looked very upset. The only time he looked up was when the Latvian supporters proudly chanted his name and he slowly raised his hand to acknowledge their support.

Heading to the last two qualifying heats tomorrow the heat will definitely be on for Toomas Heikkinen as he sits just outside the important twelve places. A great set of qualifying sessions for Andrew Jordan who sits in 8th place and must be confident of a semi-final place barring any unfortunate accidents.

The two other British entrants also taking part this weekend, Guy Wilks and Oliver Bennett find themselves 12th and 23rd respectively with Ireland’s Oliver O’Donovan in 17th. The Ford pairing of Andreas Bakkerud and Ken Block from Hoonigan Racing Division look fast this weekend and are looking at making some improvements overnight to put them even more in contention for honours.

As with my last visit, it was an incredible day. We managed to be present at the Rig Riot, the music blaring, Monster Energy girls dancing on stage and throwing out t-shirts to the crowd with Andreas Bakkerud, Ken Block, Petter Solberg and Johan Kristoffersson. It’s amazing how many people will jump, push and bump their way into position for one of those t-shirts. In the VIP/Media car park you get to meet all sorts of people and I struck up a conversation with a man who was visiting from France and informed me that he was staying in Sandwich, a small Cinque Port town not far from the circuit. He asked me what my role was here today and I showed him my media pass and explained I was the WRX Editor at The Pit Crew Online. That is when he told me he was the main sponsor for not only Team Peugeot but for IMG, the event organisers. In the next breath he invited myself and Viv to the team hospitality suite to talk with Timmy Hansen, Kevin Hansen and Sebastien Loeb. Add that to the invitation we had to the RX2 after race party and, well, you can imagine we were extremely pleased with our day of “meets-and-greets”. 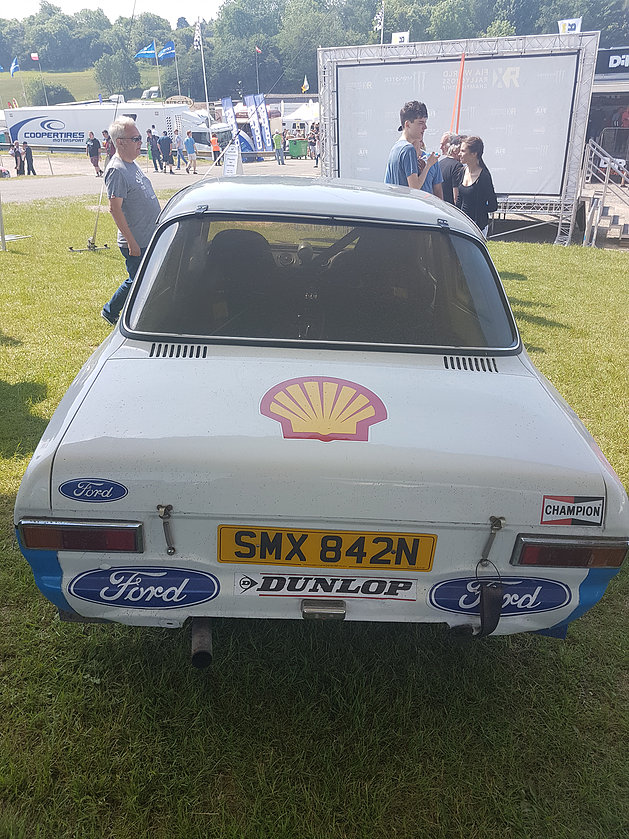 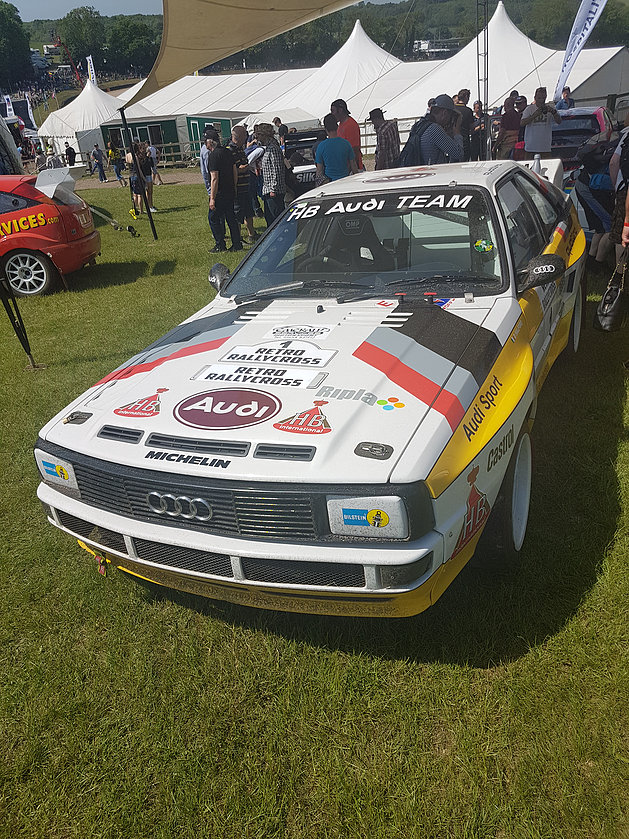 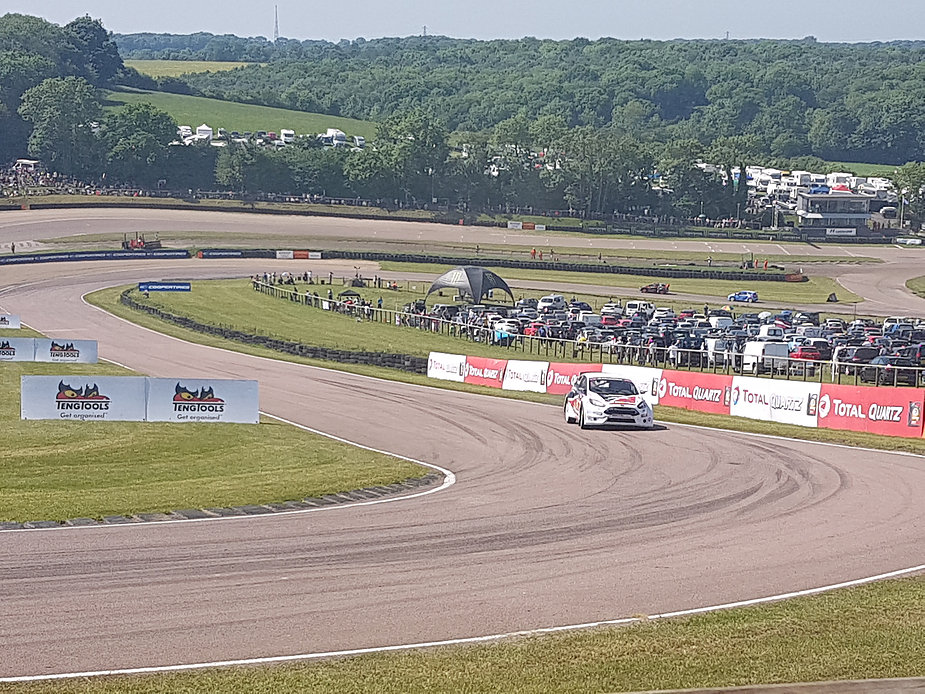 We wandered around the historic car marquee and then sat in the shade by the trees as they put on their show on track. Yes, the same as last year the sun beamed down and I have sunburn. We both left having thoroughly enjoyed the racing, the spectacle and the show which is World Rallycross, it never fails to deliver.

That was our Saturday adventure and tomorrow we get to do it all again.