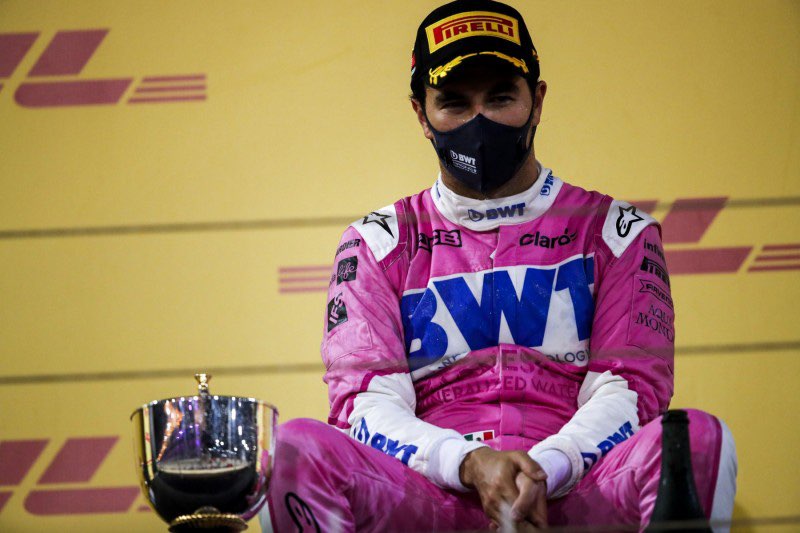 The 2020 season has come to a close – at 161 days, it was the shortest since 1966, condensing 17 races into that window which has in previous seasons taken nearer 300. The final race took place on the 13th December. The time has now come to reflect on some of the extraordinary achievements that were made and exceeded in times that happen in every hundred years. Most of these decisions were made by the public using @PitCrewOnline and Twitter Poll.

We start with our first award, Qualifying Lap of Year, where you get to see the cars at the fastest! Our four options, place they qualified and resulting race are:

This was his second consecutive race filling in for Sergio Perez after he tested positive for covid-19, although he couldn’t start the British Grand Prix due to a last minute problem with the car. Unlike the latter Bahrain rounds where the track changed to shortened Sakhir track, the 70th Anniversary Grand Prix at Silverstone had no changes from the British event. He qualified a fantastic P3, going faster than Verstappen; he was only beaten by the fastest car ahead of him in Mercedes. He ended Sunday in P7 so managed to score points, but the podium continues to elude him.

The next award is: Best Start of the Year. the nominees are:

Kimi had a great start at Portimao, gaining 9 places on the opening lap; he even continued to rise to sixth place in the race for a further few laps before others tyres began to get temperature on the unique surface the track had. It narrowly beat Vettel’s start which received 33% of the vote at Turkey.

The Third award is: Overtake of the Year. We love wheel to wheel action – even better when DRS isn’t involved! Our options are:

Charles Leclerc on Lando Norris – outside of turn 4 – Austrian GP

George Russell took his chance at the Sakhir Grand Prix with both hands but things out of his control prevented a maiden victory. He showed his skills and the pass on his team mate at the beginning of the final stint of the race after a calamitous safety car period for the team was one of these.

Next is an award for Pit Crew of the Year, which didn’t need a poll; a much more statistical thought!

9 times this year they have broken the 2 second barrier, with their fastest time being 1.86 on two occasions – close to the world record 1.82 time. Another remarkable feat was replacing Verstappen’s front left suspension in record time after his error en route to the grid at Budapest which led to his fantastic start. They won the DHL Fastest pit stops with 555 points with Williams next to 264. They only failed to achieve the fastest pit stop at Spa and Monza.

A bit of a hysterical award next! The Dyson Hoover Award

(Other hoover brands are available)

Valterri Bottas – For picking up bargeboards, and getting them stuck in his airflow which ruined his car’s downforce. He has also a habit of getting punctures of running over debris – Baku 2018 springs to mind.

Rookie of the Year!

Nicholas Lati… There was only one full time rookie this year? Nicholas Latifi! Solid job on his debut year. He nearly scored points in the inferior Williams at Imola where the unfortunate Russell made his one of his very few mistakes of the season in P11. Next season will be about cutting that deficit at the tracks we visited this year and spending time on the simulator; points in 2021 will be the target! Especially with Montreal looking likely to be one of our venues, Latifi will want better understanding and a better car for that event!

Race of the Year!

The Sakhir GP took it by just 3% over the title securing Turkish event. Sakhir had the action! The lap one drama took out the touted Verstappen and putting the unlikely victor Perez last! Mercedes were the creators of their own downfall, and what if Jack Aitken, technically driving Russell’s car, didn’t put it in the wall? People questioned the shortened Sakhir layout, but it was great. if anything, another DRS zone before the final corner would have been great.

Driver of the Year!

The drivers to the left of the quarter final option were seeded in Championship order and then drawn at random against the other four randomly who had fantastic seasons in other cars. These were the agreed top 8 by Pit Crew census then each went to a 3 hour poll except for the final. That went for a 24 hour poll during Abu Dhabi weekend.

The public decided that Sergio Perez is the 2020 driver of the season! Congratulations to Checo! The season has come to a close, and some drivers are yet to be confirmed. Will our driver of the year get a call from the Red Bull hierarchy placing Albon on the sidelines for 2021?

That is the Awards for 2020, with the calendar being arranged on short notice and bubbles being kept to with only a few positive cases it looks like F1 can call 2020 a success. Old friends of Imola and Turkey came to assist whilst Portugal and Mugello came to show what they could do. Vaccines look to be starting to be distributed to assist with the pandemic, so fingers crossed some normality resumes to the world of Motorsport and beyond.

Ask every driver in Formula 1, the home race is guaranteed to be their favourite. This was no exception for current World Champion Lewis Hamilton going in to the British Grand Prix at Silverstone this weekend, aiming to build on his lead over rivals Sebastian Vettel and team-mate Valterri Bottas.

It wasn’t an ideal start for Hamilton though, having qualified in P2 on Saturday afternoon after being pipped to the top spot by fellow Mercedes driver Bottas, with only 0.006s between the two laps. This time Hamilton didn’t simply have the luxury of building a lead from the start, he’d have to earn his keep and get past the fiery Finn before getting to the golden trophy.

Behind the two Mercedes’ drivers sat Charles Leclerc in P3, eager for another opportunity to be on the podium following a dramatic Austrian Grand Prix which saw him lose out on 1stplace to the ballsy Dutchman, Max Verstappen and Red Bull who coincidentally sat in P4, providing fans with a great deal of entertainment throughout the race.

It was a relatively clean start all round, however Haas’s week of drama continued as Kevin Magnussen and Roman Grosjean made contact in the first lap, which unfortunately forced both drivers to retire from the race. This unlucky accident resulted in Grosjean’s 5thretirement of the season, and no doubt, 2 pairs of thoroughly boxed ears from an extremely angry Gunter Steiner in the post-race briefing.

At the front of the grid, both Mercedes’ drivers had a good start, with Bottas’ managing to hold his team-mate at bay with some excellent defending. Bottas’ looked to be building a lead on Hamilton. This was all in vain as Antonio Giovannazi beached his Alfa Romeo in the gravel giving Hamilton the opportunity for a free pit stop.  Unfortunately, Bottas wasn’t able to catch up with the Brit, who had been rewarded by opportunistic strategy from Mercedes engineers. This lead was held for the duration of the race, much to the joy of the hordes of Hamilton fans in the stands that day.

But we expected that.

Meanwhile, a little bit further down the track, some exciting racing was finally taking place.

Verstappen was keen to rub yet more salt in Leclerc’s wounds for another podium finish, providing fans with some clean, excellent racing for 13 laps, after which came an overtake that had fans (aka me) screaming at their TV’s in amazement. Both Leclerc and Verstappen came into the pits at the same time, putting enormous pressure on both Ferrari and Red Bull mechanics to get the tyres changed flawlessly and quicker than the other team.

Red Bull won the battle, but as soon as the mechanics had stopped cheering on Verstappen taking 3rdplace from Leclerc in the pitlane, the young Ferrari driver had re-gained the position emerging back on track. New tyres on a newly re-surfaced track caused Verstappen to run wide at turn four, leaving the door wide open for Leclerc to take back 3rdplace.

To pit or not to pit, that was the question once again for Leclerc’s strategists at Ferrari who were slow to bring their number two driver in to change his boots during the safety car. This cost the young Monégasque track position, coming out ahead of Verstappen who had also pitted and emerged in 6th.

The re-start was promising for Verstappen who managed to overtake Leclerc for a second time (on track this time), and push on towards his team-mate Pierre Gasly for 4thposition. Gasly honourably moved aside to allow Verstappen to charge after the other prancing horse, which he quickly met and began the battle for 3rdplace once again.

Verstappen overtaking Vettel going into Stowe could have been one of those moments that go down in fondly remembered Formula 1 history, unfortunately, the gods of racing weren’t happy to leave well enough alone. Almost immediately after Verstappen had gained the position, he had lost it once again after Vettel misjudged his braking and shunted the back of the Red Bull which caused them both to run off the track.

By some miracle, the only thing that was damaged was the two drivers’ egos, and the pair somehow managed to work their way out of the notoriously tricky gravel trap and back onto the track to continue with the race. Vettel was slapped with a 10-second time penalty for this incident, which adds to what has been a gut-wrenching season for the 4-time World Champion.

This weekend was not simply an opportunity for fans to bask in Hamilton’s never-ending glory, British fans were also able to say thank you to a F1 icon, Sir Frank Williams who was celebrating an astonishing 50 Years in Formula 1. Although Vettel’s mistake cost Ferrari important championship points, it also gave the Williams’ drivers the opportunity to not finish last for the first time this season. British driver George Russel finished 14thahead of his team-mate Robert Kubica in 15th, although it doesn’t seem like much of an achievement, it was a welcome change for the struggling team.

The racing wasn’t simply reserved for Ferrari and Red Bull, McLaren and Renault were also able to get stuck in. McLaren golden-boy Lando Norris made his intentions quite clear from the beginning, as payback for Ricciardo’s cheekiness in the driver’s conference at the start of the weekend.

The two battled it out wheel-to-wheel, quite literally from the start of the race, through Copse, Maggots and Becketts until Ricciardo eventually lost out to the youngster in the hair-raising battle. Norris’ spectacular driving ability was over-shadowed by McLaren’s poor strategy choice which eventually kept Norris out of the points, finishing in 11th; Ricciardo managed to score his first few points since Canada, finishing in 7thplace.

Following his win at Silverstone, Lewis Hamilton is able to go into the German Grand Prix with a 39-point lead on his main rivals, Valterri Bottas and Max Verstappen. That said, after this weekend, there’s quite clearly something special about a home race, and with Hockenheim just around the corner, perhaps this is where Vettel will start to make his comeback.