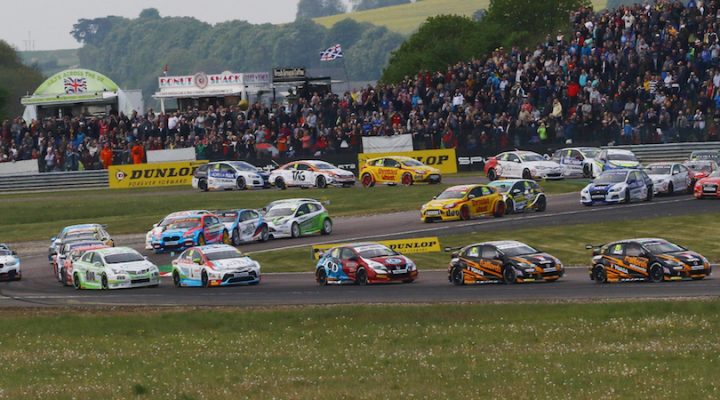 Heading into the 2018 season TOCA and BTCC have made two announcements. One relates to the rule changes for the 2018 season and the other marks a special championship race to mark the 60 year anniversary.

Here are the announcements from BTCC:

A number of rule changes have recently been ratified by TOCA that will take effect from the opening round of the 2018 Dunlop MSA British Touring Car Championship:

– Fines will be increased, with a significant additional championship fine applied on top of any MSA fine.

– From next year a ‘strike’ will last for 12 months from the date applied, rather than just the same season (This then brings them into line with the 12 month penalty points system on MSA race licence).

– Strikes gained during a 12 month period will result in the following penalties;

3rd strike – back of the grid

– A relatively minor but straightforward on-track incident, involving and affecting only two cars, that can be simply rectified by swapping their finishing positions post-race (or which has already been fully redressed within one lap by the offending driver) will not necessarily constitute a ‘strike’.

Eligible drivers will be those that have never scored an outright podium position.

Any driver subsequently scoring an outright podium during the season, will be ineligible for the JST from the next season.

If needed, these will take place once per season – at around the mid-season point – as was done in 2016.

A team is now permitted a maximum of two permanent driver changes per season (previously one).

A driver or Team Manager cannot take part until they have successfully passed a mandatory regulations test. 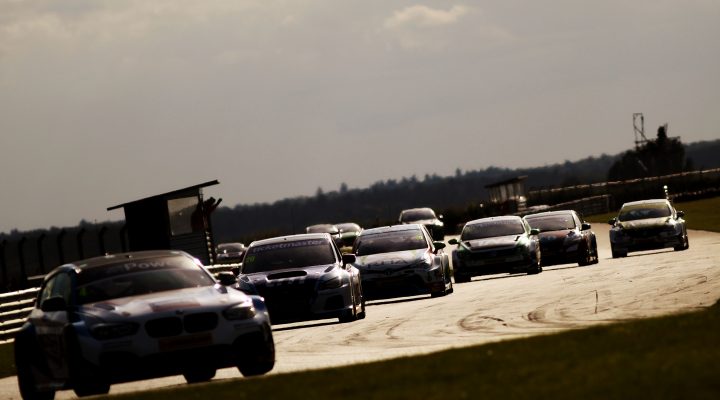 60 mile BTCC showpiece to take place at Snetterton in 2018

The third race at Snetterton on Sunday 29 July will be an extended 60-mile contest, with all cars competing without any success ballast and with double championship points on offer.

Furthermore, there will be a separate qualifying session on Saturday 28 July for this showpiece race, with all cars qualifying at their base weights.

The 2018 season will still comprise of 30 races across ten weekends, with all other races following the regular format as per recent seasons.

Snetterton – also well known for the BTCC Night Race in the 1990s and 2000s – has long been a staple of the summer calendar for race fans and this exciting addition is set to add yet further fever to the festival atmosphere.

“We are delighted to confirm this special extended race as part of the BTCC’s diamond jubilee celebrations. As well, there will be a number of additional activities to celebrate our 60th anniversary throughout 2018 which will be revealed over the next few months. We believe this 60-mile race, roughly double the distance of a normal BTCC encounter, will add a further sporting twist to what will be a fantastic and memorable season. I am sure our loyal teams, drivers, venues, officials, sponsors, partners, marshals and of course our fans will share in this excitement, making the Snetterton race weekend an unmissable event in 2018.” 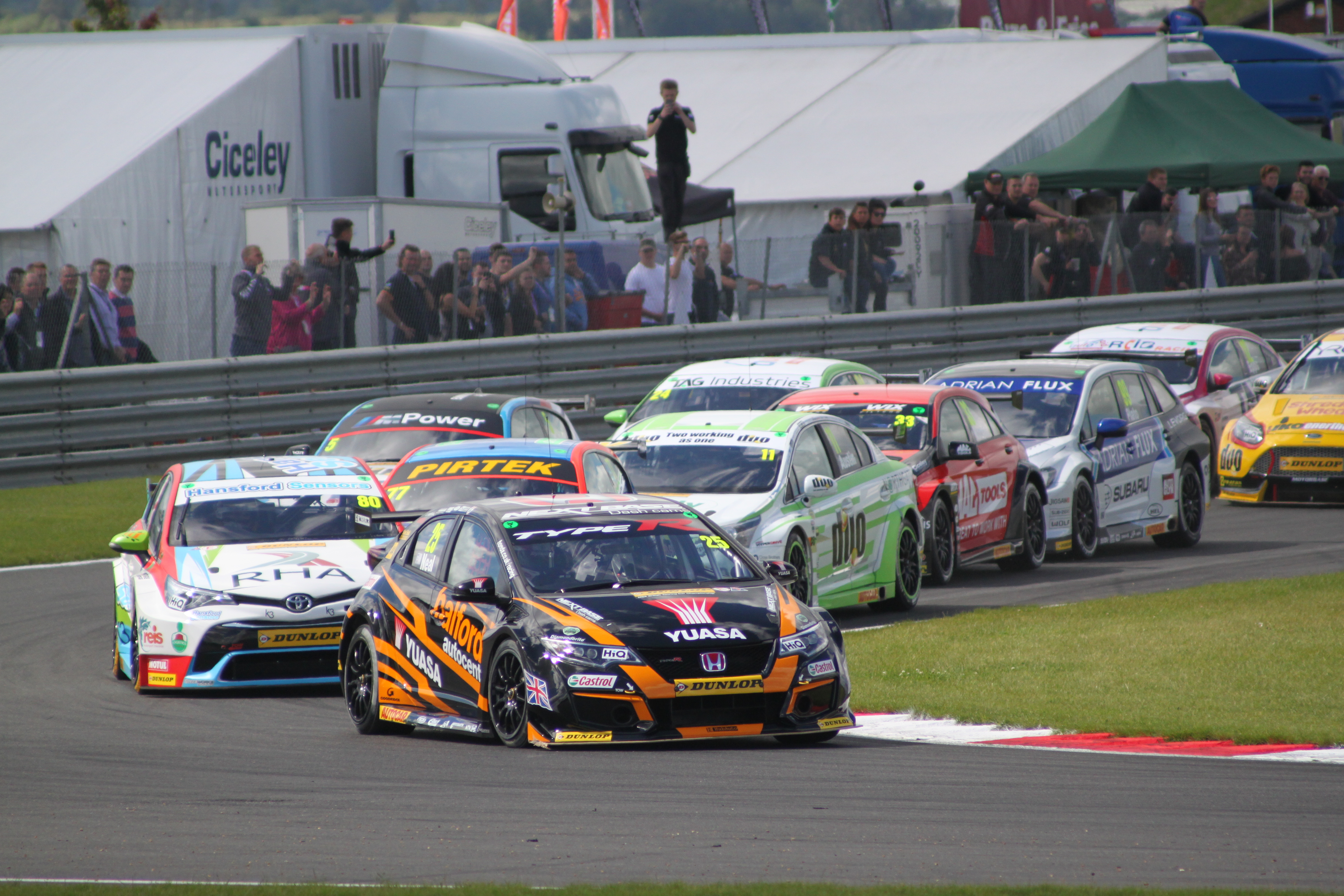 Ashley Sutton did his British Touring Car Championship aspirations no harm by taking two wins at Snetterton this weekend.

The Subaru driver closed in on title leader Gordon Shedden and proved his car has the potential to secure an unlikely title win.

It was Honda who took pole position with Eurotech backed driver Jack Goff taking the top spot. Colin Turkington in the BMW was second with Sutton taking third.

There was drama however as BTCC legend Matt Neal’s time was removed due to a failed ride height test. However due to some stipulations regarding the stewarding, his time was reinstated and he started fourth. 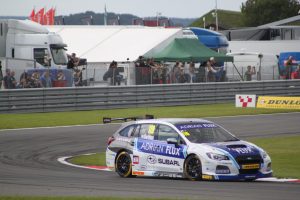 Turkington jumped Goff at the start and took the lead, with Sutton following behind in the Subaru. There were a few bumps and scrapes throughout the race as Ford’s Mat Jackson was almost spun round by Chevrolet driver Dave Newsham at Agostini.

The drama didn’t end there however as at the very same bend, Rob Austin dove down the inside of Tom Ingram, with the pair colliding and Austin’s Toyota suffering a puncture. He limped back to the pits but the damage was already done. 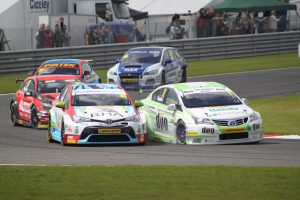 Back at the front Turkington lost the lead as he went off track, handing Goff the lead. Sutton was closing in on Goff, with the pair fighting hard, but on the exit of Agostini in to the following chicane, Sutton got past Goff and took yet another win in his Subaru. Goff took second with Neal rounding off the podium.

Race two was a much calmer affair after the opener, with Sutton taking a lights to flag win, pulling away from the chasing pack. The real fight was between BMW pair Turkington and Rob Collard. The pair were battling all race for second place, with Goff joining in the action.

Turkington managed to edge out Collard by just seven tenths, with Mat Jackson in the Shredded Wheat Ford in fourth and Goff in fifth.

Race three was unsolicited carnage, as the last race of the day burst into life, Ash Sutton, winner of the last two races, was hit off the track and suffered race ending damage, losing his hopes of a Snetterton hat trick.

Other notable crashes included Josh Cook in the MG being punted in the rear and retiring, as well as Matt Neal running wide and sliding into the wall. 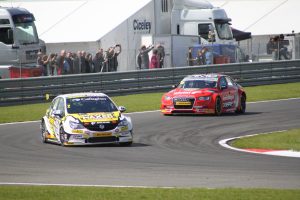 Neal’s team mate Gordon Shedden took the win to preserve his title lead, with Collard and Turkington in second and third respectively. There was cause for celebration in the Power Maxed Racing garage as rookie Senna Proctor finished a career best ninth after starting 23rd.

With Shedden leading the championship lead by just two points from Rob Collard, and 11 points separating the top four, there will be a few twists and turns before the end of the season.