Moto3 fans were treated to an Austrian masterclass from Ayumu Sasaki at the Red Bull Ring. With the championship battle edging towards it’s climax, can the Japanese sensation muscle his way into title contention?

The Misano World Circuit Marco Simoncelli in the Italian province of Rimini will host round 14 of the 2022 Moto3 season this weekend (02/03/04 September).

After winning both races in Misano last year, Leopard Honda’s Dennis Foggia heads into the weekend buoyed by the fanatical backing of the Italian supporters. The 21-year-old lost ground on his title rivals in Austria, and will be hoping to bounce back after a disappointing 12th place finish.

The duel between Spanish teammates Sergio Garcia and Izan Guevara for the Moto3 crown continues. Top 10 finishes from the GASGAS duo put even more ground between themselves and the rest of the field, with Foggia their closest threat now 49 points off the championship lead.

With just 5 points separating Garcia and Guevara, it’s hard to picture anyone else winning the championship, but after a dominant ride in the Styrian mountains, Sasaki has given himself a chance, albeit a slim one, to mount a late charge for the title.

Sasaki’s Sterilgarda Husqvarna Max teammate John McPhee will once again carry the hopes of British fans. A blunder in qualifying at the Red Bull Ring meant he started towards the back of the grid, but the Scotsman rallied to finish 9th after a strong ride through the field.

Elsewhere, Turkish rider Deniz Öncü has been in good form since returning from the summer break. The Red Bull KTM rider is still searching for his first win in Moto3. There’s no question that he has the pace to compete at the business end of the field, with 4 podium trophies in the class, the 19-year-old will be desperate to get onto the top step.

Whatever happens, the Italian crowds are in for a treat this weekend, though they’ll need to bring their waterproofs. The forecast for the weekend looks ominous, with showers anticipated on Saturday and thunderstorms expected on Sunday. The race is due to start at 11:00am local time (10:00am GMT).

Not even two long-lap penalties could stop Ayumu Sasaki from storming through the field en route to a dominant win in at the Red Bull Ring, his second victory in Moto3.

The Japanese rider had shown great pace all weekend, but having been handed a double long-lap penalty from the previous round at Silverstone, few expected a win from the Husqvarna man.

Sasaki capitalised on his front-row grid position and settled straight into an early tussle with fellow Japanese rider Tatsuki Suzuki and Deniz Öncü for the lead of the race. He briefly held P1 before serving his penalties, which caused him to drop down to 21st position.

As is often the case in Moto3, the lead changed hands numerous times, with multiple riders taking advantage of the tow along the start/finish straight. A bold move from David Muñoz on lap 5 saw him fly from 4th to 1st at turn 1. The leading group surged towards the new chicane, where Öncü was forced wide, causing him to drop to 9th.

The Team Aspar duo of Sergio Garcia and Izan Guevara were making progress through the pack and joined the leading group with Guevara taking the lead from Suzuki at the start of lap 6.

As predicted before the race, gaps started to appear throughout the field. Several riders set personal fastest laps to try and stay with the leaders, but none were faster than Sasaki who was carving his way towards the front.

By lap 10, he had caught up to the leading group and forced his way past Garcia, who received a track limits warning for his troubles. Nobody was able to match Sasaki’s pace, and he continued to pick off the riders ahead of him with ease.

As Guevara led the pack into lap 13, Sasaki was all-over the GASGAS riders exhaust, hurrying him through the chicane and sliding into first place at turn 3. Suzuki followed his countryman past Guevara to put his Leopard Honda into 2nd.

Sasaki looked in complete control in the lead of the race, Suzuki was keeping him honest, but was unable to get close enough to make a passing attempt as the laps continued to tick past.

On lap 17 Jaume Masiá crashed in turn 3, the Spanish rider had struggled all weekend but was able to re-join the race. Elsewhere the Aspar riders were racing each other very aggressively, with Garcia passing Guevara and forcing him wide at turn 10 in the process.

In the closing stages, Suzuki had to contend with a hard charging Öncü and was unable to attack Sasaki who rode flawlessly to take the chequered flag. Suzuki held onto 2nd with Muñoz beating Öncü to the final step on the podium.

Garcia finished 5th, increasing the gap in the championship standings over his teammate Guevara to 5 points. It was a day to forget for fellow championship rival Denis Foggia who finished 12th, the Italian is now 49 points off the championship lead. Sasaki’s win puts him 55 points behind Garcia in the standings. 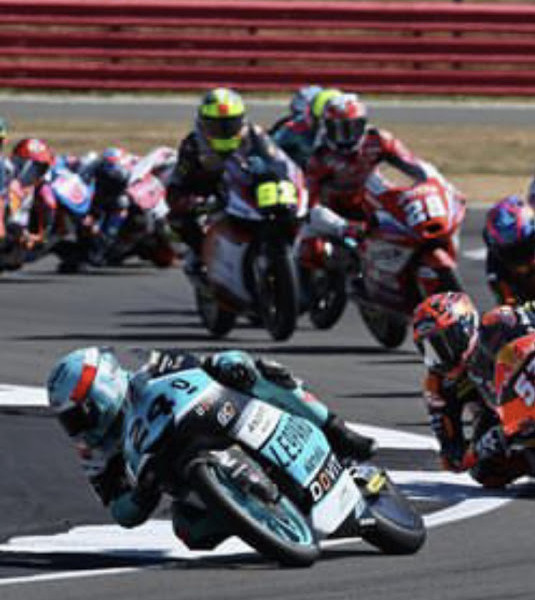 The second half of the 2022 Moto3 season began in style with a thrilling British Grand Prix barely a fortnight ago. Now that the dust has settled, our attention turns to the Red Bull Ring in Austria for Round 13 of the championship this coming weekend (19/20/21 August).

The GASGAS Aspar duo of Sergio Garcia and Izan Guevara were unstoppable during the first half of the season, they sit first and second in the championship standings respectively, despite both crashing out in the latter stages at Silverstone. The chequered flag was taken by title rival Dennis Foggia, who masterfully guided his Leopard Racing Honda to victory, capitalising on the Spanish riders misfortune. The Italian is now just 42 points behind Garcia in the race for the Moto3 crown.

Perhaps the biggest talking point ahead of the Austrian GP is the new chicane which has been installed to reduce speeds on the approach to turn 3. The alteration was prompted after an incident in the 2020 MotoGP race, where Franco Morbidelli and Johann Zarco came together at high speed, nearly collecting the Yamaha duo of Valentino Rossi and Maverick Viñales in the process.

The revised layout has divided opinions, with some riders suggesting that the new chicane itself is dangerous. How the racing will be affected remains to be seen, but the hope of course is that the changes will lead to more overtaking as well as improved safety.

As is often the case in this class, there are a number of contenders for victory. Last year’s podium finishers will all be in the hunt this weekend. 2021’s race was won by the aforementioned Garcia, with 3 wins already this season, he is probably the favourite. Turkish rider Deniz Öncü is still searching for his maiden Moto3 win, he was last year’s runner up and has the added motivation of Austria being both KTM and Red Bull’s home race. Foggia, who was third, has shown steady improvements in his results of late, though he knows as well as anyone that more victories will be required if he is to win the championship.

British fan’s hopes will once again rest upon the shoulders of Sterilgarda Husqvarna Max rider, John McPhee. The Scotsman rode well at Silverstone and almost led at one stage, though a chaotic final lap saw him shuffled back to 7th place. Visiontrack Racing Team’s Scott Ogden made progress through the field after a poor showing in qualifying, finishing 12th. He and teammate Josh Whatley will be hoping for better fortunes this weekend.

Weather was an infamous factor at the Red Bull Ring in 2021, and the forecast suggests it will be again this year. Thunderstorms are predicted for Friday, with showers anticipated on both Saturday and Sunday. The race is scheduled to start at 11:00am local time (10:00am GMT).