Mercedes has unveiled its new W12, the car with which it hopes to win an eighth consecutive pair of F1 titles in the hands of Lewis Hamilton and Valtteri Bottas.

The Mercedes AMG F1 W12 keeps the black base livery introduced last year as part of the team’s anti-racism commitments, fading to silver on the engine cover. It also features much more prominent AMG branding across the car as per Mercedes’ plans to foreground its high-performance division within its F1 marketing.

The most visible changes to the design that’s carried over from 2020 are towards the rear, which is more tightly packaged around the engine. The front of the car is largely the same, which bucks the trend of the front-end development seen in the launches so far, but that could still change before testing next week.

Mercedes technical director James Allison called the W12 “an old friend in many ways”. However, he admitted that the launch spec of the car was missing some aero developments to the floor, which the team wanted to keep hidden from its rivals before testing.

Allison also said that AMG High Performance Powertrains have added more power to the engine for 2021. Beneath the chassis, the W12 features further improvements to the suspension and cooling systems.

Although the W12 is the clear title favourite for 2021, Mercedes team principal Toto Wolff greeted the new challenger with his trademark scepticism. “Every year we reset our focus,” he said. “The scoreboard goes to zero and there’s always more performance to be found.

“It’s very natural to get used to success, and therefore not fight as hard for it. But this team has not shown any of that. I see the same fire, hunger and passion now as I did the first time I walked through the doors in 2013.”

Speaking at the Science of Formula 1 event at London’s Science Museum, Mercedes Technical Director James Allison commented that Lewis Hamilton was “devastated” by Mercedes’ under-performance at the Mexican Grand Prix, despite having just secured his fifth world title.

Asked what limited Mercedes’ performance in the race, Allison revealed “we know”, and while he was unwilling to share what the problem was, added that it was something with an “easy fix”.

Allison was also asked his opinion on the changing technologies in F1 over the years, and said that the removal of driver aids like traction control in previous years had not made that much difference, as the “best drivers were still the best drivers”, having adapted to the changes.

Allison said that he would like to see the possible addition of fans on the cars, “although not for the reason you might think”, explaining that he believed they could allow cars to follow each other more closely, and could mitigate against the ill-effects of dirty air which limits overtaking in Formula 1 at the moment.

Allison also revealed that Mercedes are already hard at work on their 2020 car, and that teams typically begin working on their cars over a year in advance. The 2018 car, Allison says, is now “a bit of a ghost ship”, with little development taking place this late into the season, with the team focused on both the 2019 and 2020 cars.

When asked if Formula 1 will one day become an all-electric series, Allison said he was convinced it will become a reality as the sport moves on to reflect the times. In future years, Allison believes that new generations of fans “won’t miss the sound” and that it’s “not a case of if, but when” the change will happen.

Allison was joined at the event, hosted by Dr Oliver Carpenter, by Annastiina Hintsa of Hintsa Performance and Dr Karl Surmacz of McLaren Applied Technologies. 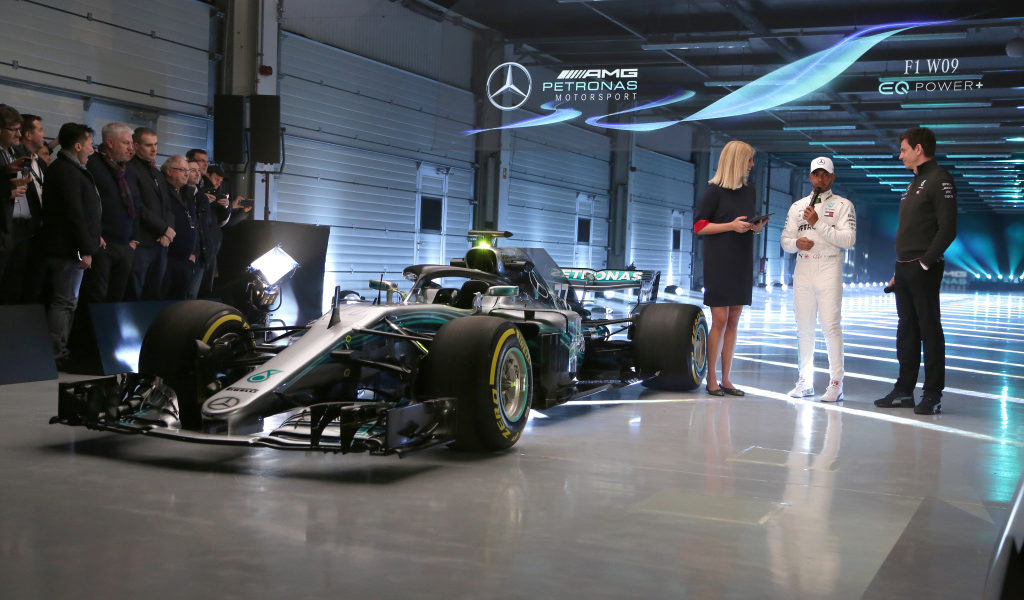 Mercedes has revealed the W09 EQ Power+, the team’s new car for the 2018 F1 season, at a special launch event at Silverstone.

The new Silver Arrow carried out its first series of laps on Thursday morning with Valtteri Bottas at the wheel, before being given an official presentation later in the day. Defending world champion Lewis Hamilton then took to the track for his first taste of the car he hopes will take him to a fifth drivers’ crown this year.

Like most of its rivals for this season, the W09 isn’t much of a departure from last year’s model. It has retained the same ultra-long wheelbase that helped the W08 to dominance at 2017’s high-speed circuits, and also sports a conventionally-rounded nose cap—as yet, the only such design on this year’s grid.

As well as an increase in rake similar to the Red Bull philosophy, the W09 also features an all-new suspension design, and what Hamilton described as “a different aerodynamic characteristic” for the floor, both aimed at improving the car’s ride.

Speaking of the new car, Mercedes technical director James Allison said: “Across the board, [the W09] is more elegant than last year.

“Last year’s regulations were brand new and we weren’t quite sure which direction they would take us in.

“This year, being a little more confident of what we’re aiming for, we’ve been able to commit more fully to certain concepts. So we have the packaging much tighter and have taken things to more of an extreme.”