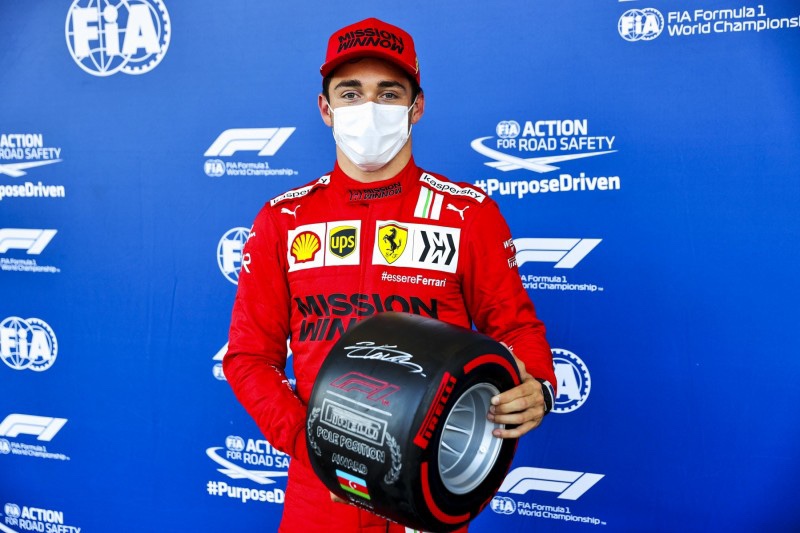 It was Charles Leclerc of Ferrari who took pole in Baku on Saturday afternoon after a frantic qualifying session. The Monegasque driver received a nice little slipstream behind the Mercedes of Lewis Hamilton in the first run of Q3 and was able to put a competitive time on board which was good enough for pole position.

The second run of Q3 was brought to a halt after Yuki Tsunoda of Alpha Tauri  crashed into the barriers during his flying lap which was followed by Carlos Sainz of Ferrari locking up and losing his front wing in the same corner followed by a hard hit to the barriers. This meant that there was yet another red flag in the session and pole was decided. The Spaniard however managed a lap good enough for P5 in the first run but will not be too amused after the crash was severe on the back end of his car which might result in a gear box change.

Mercedes finished the session with Lewis Hamilton qualifying at P2 and Bottas at P10, after the Finnish driver provided Hamilton a tow during the first run of Q3 but could not get his own lap in during the second run. The team will be satisfied that they could put at least one car on the front row but Bottas will rue his misfortune on a track that he is generally good at.

Driver’s championship leader Max Verstappen drove a very good lap but only managed a P3 while his teammate Sergio Perez could only manage P7. One thing that Redbull can still be confident of is the fact that their race pace has looked promising in the season so far and crucially, the championship rival Hamilton is not so far up ahead.

Pierre Gasly continued to impress after an excellent lap saw the French driver place his Alpha Tauri at P4 after an amazing lap while his teammate Tsunoda managed a P8. An excellent position for the team overall barring the carsh for Tsunoda later on means they will be hunting that double points finish right from the start.

Lando Norris continued his good start to the season after qualifying at P6 but the English driver is under investigation for infringements after red flags in the first qualifying session. His teammate Daniel Ricciardo’s dismal season continued after the Australian driver crashed into the barriers towards the end of Q2 which ended his qualifying and put him on P13 on the grid for the race tomorrow.

Fernando Alonso bounced back from his bad outing in qualifying at Monaco and qualified into Q3 this time around with a mega performance. Having termed Baku 2018 as the best race of his career, Alonso will be looking to make the most of the scenario as he is set to start from P9 on the grid and is in with a chance for some valuable points tomorrow. His teammate Esteban Ocon could not get out of Q2 and will be starting the race from P12.

Aston Martin’s Lance Stroll brought on the first red flag of qualifying in Q1 after he crashed out towards the end of sector 2 on his first run in Q2 and will be starting at P19. His teammate Vettel narrowly missed out on Q3 by as less as three hundredths of a second after the red flag brought on by Ricciardo meant that he could not improve his lap time. The German driver will start at P11 but has an advantage of starting on tyres of his own choice.

Alfa Romeo’s Antonio Giovinazzi was involved in the second red flag during Q1 after crashing into the same corner as Lance Stroll and the Italian driver will be starting last. His teammate Kimi Raikkonen will be starts P14 after his Q1 laps were good enough to get out of it. Both the Haas cars had clean Q1 laps and they will be starting with Schumacher at P17 and Mazepin at P18 respectively.

George Russell in the Williams got out of Q1 yet again and will be starting the race at P15 but it was not certain before the start of the session. The English driver had to wait until the mechanics changed the entire power unit of his car after a water pipe leak meant he could not continue at the end of his last free practice. His teammate Latifi will line up at P16 after failing to get out of Q1.

The race is set to get underway with championship rivals Hamilton and Verstappen all set to start at 2nd and 3rd while Ferrari slowly seem to be improving and mounting challenges. The race promises to be a cracker as is the usual setting in Baku when the five lights go out.

After what seemed like an unusually long winter Formula 1 is back with a bang in the desert.

After winter testing, three practice sessions and qualifying all that we knew for sure was the grid had indeed tightened up, especially for the top two teams in Mercedes and Red Bull.

Max Verstappen had taken pole position from Lewis Hamilton by just under four tenths of a second with the sister Mercedes of Valtteri Bottas in third and Charles Leclerc in fourth.

Even sitting thousands of miles away the anticipation at the start was palpable.

The instillation lap did nothing to calm the nerves as Checo Perez loses power initialising a second instal lap.

He did manage to power up the ailing Red Bull but had to start from the pit lane.

Five red lights go out and we’re away for the Bahrain Grand Prix and indeed the start of the 2021 season. Unsurprisingly to many fans the number two Haas crashes out at turn one and his race ends before it can even start, leaving Mick Schumacher the sole Haas driver as the safety car is deployed.

Leclerc had managed to snatch third from Bottas before the safety car was deployed! Sainz lost out at the start and is down in P10, with Alonso and Stroll both gaining a position from him.

Verstappen leads the pack away from Hamilton who is left to defend from Leclerc into turn one.

Bottas takes third place back as we settle into a familiar pattern.

Verstappen pulls out a small lead of just under two seconds.

Further down the pack Sergio Perez starts to haul the Red bull through the field.

Mercedes are first to blink and try the undercut, putting the hard tyres on and it looks like a great decision as Red bull stays out as Lewis starts pumping in purple sectors and is the fastest man on track.

Verstappen’s in at last! And goes from mediums to mediums, he will have to stop again. He exits the pits nearly seven seconds behind Hamilton!

The top three are Hamilton, Verstappen and Bottas. Further down the field Vettel and Alonso are fighting it out for P8!

Max is putting in the strong laps now on tyres ten laps newer than Hamilton’s. He closes to within two seconds or so, as Mercedes once again throws the dice and pull Lewis in for a new set of hard boots.

He exits the pits in third behinds Bottas in second and Max in first.

Bottas stops but there’s a problem with the front left! It’s a 10.9s stop and he comes out behind Leclerc in P5

Verstappen pits for hards and is stationary for an incredible 1.9 seconds and leaves himself 8.7s to make up to Hamilton in the final 17 laps.

Hamilton’s trying to keep his tyres going until the end, andy it’s falling back into Verstappen’s hands as he starts to take chunks off Lewis.

Verstappen is eating into Hamilton’s lead like its an open buffet. Half a second out in the middle sector alone, and he can see the Mercedes on the straights now.

Hamilton brakes another record this time for the most laps led in F1 with 5,112!

Vettel and Ocon have come together. Both have got going again, but Vettel has some damage to his front wing. Looks like Sebs fault but that’s one for the stewards to decide.

Max is like a lion hunting down his prey with only the odd back marker to hold him back, Lewis locks up and goes wide at Turn ten! He keeps the lead but Verstappen is just a second behind now and within DRS range.

Lap 52 and Hamilton only has half a second over Verstappen as he tries around the outside of Turn one but Hamilton holds him off!

Down to Turn four and Verstappen goes around the outside again, and this time he takes the lead!

Max Is immediately told by his team to give the place back as he’s left the circuit whilst taking the position, if he doesn’t do it a penalty could be costly.

Verstappen’s loses grip in Hamilton’s wake but he’s now out of DRS range on the start finish straight.

Bottas stops for a new set of tyres as he attempts to grab the extra point for fastest lap.

Hamilton starts the final lap and Verstappen is back within DRS range, no matter how well Max has driven this weekend he just can’t get passed the exuberant Hamilton who takes the win from Verstappen and Bottas.

Norris, Perez, Ricardo and Yuki Tsunoda all make impressive debuts, Alonso and Seb looked good and should improve as we get further into the season.

Mick Schumacher had a quiet race finishing last but that’s all that can be expected in the under developed Haas.

Ferrari are considering using the FIA’s right of review process to challenge Sebastian Vettel’s Canadian Grand Prix penalty, rather than a submitting a formal appeal.

The FIA’s International Sporting Code allows competitors to call for a post-race review of decisions, providing there is new evidence that wasn’t available to the stewards at the time.

The time period for making a review case is 14 days after final classification, which means has Ferrari has until Sunday 23 June to gather and present their new evidence to the  FIA.

Ferrari had previously said they would contest Vettel’s five-second time penalty through the FIA’s International Court of Appeals. However, as the court’s own rules state than in-race sanctions cannot be appealed, it’s understood the team is preparing an alternative challenge.

Speaking to Motorsport.com, a Ferrari spokesperson said: “We are still working on [the appeal] and we are collecting more evidence.”