After a whirlwind last Moto3 race of 2018 in Valencia, Can Oncu solidified his place on the grid with an impressive debut and a record-breaking win. The 15-year-old Turk became the youngest GP winner and the first Turkish winner of a GP, smashing many more records along the way. Winner of the Red Bull MotoGP Rookies Cup (with his twin brother Deniz securing second place) and finishing 24th(out of 36) in the Moto3 standings after only one race – the trophy cabinet will be well stocked in the Oncu household after this year. Oncu’s 2018 might have ended in spectacular style, but his 2019 season will continue with Red Bull KTM Ajo as he races for the Finnish team in Moto3 and chases down even more podium finishes. A new flurry of Moto3 riders will be filling the grid in 2019, as Jorge Martin, Fabio di Giannantonio, Marco Bezzecchi, Nicolo Bulega and Enea Bastianini all head for debut Moto2 seasons. However, the Turk will have competition from Aron Canet, Gabriel Rodrigo and Lorenzo Dalla Porta, as well as newer riders like Celestino Vietti. Jade du Preez put some questions to the youngster, to find out how you celebrate such a historic win, and what’s next for the rookie to accomplish.

Jade du Preez: How do you feel after your first win?

Can Oncu: I really wanted race with Jorge Martin and Marco Bezzecchi before they went to Moto2. I was lucky and my wish was fulfilled. Martin was my favourite all year long. That I can get involved in the front I spotted FP2 and FP3 and after qualification it was clear. Martin and Bezzecchi brought a very good performance all year. I was very surprised that I won. When I heard after the race that I had broken some records I could not believe it – the youngest Moto3 rider of all time, the youngest Moto3 rider to win a race, and more. Everyone from the paddock congratulated me. Except from the north pole and south pole, congratulations were sent to me from all over the world. The feeling of happiness is really indescribable. I thank everyone who supports me.

JdP: What are your goals for 2019 since you’ve already won a race?

CO: I know that I am not perfect, that I still have much to learn and I try hard to do so. Aki Ajo and my race team help me and my brother. I will try to be in the top 10 at the end of the year.

JdP: How did you celebrate your win in Valencia? Did you cheat on your diet, hangout with friends, etc.?

CO: I was celebrating with my entire team and eating delicious food in Valencia. I do not like alcohol, I like fruit juices. When I arrived at home in Alanya I was immediately visited by many friends and suddenly we had a party. 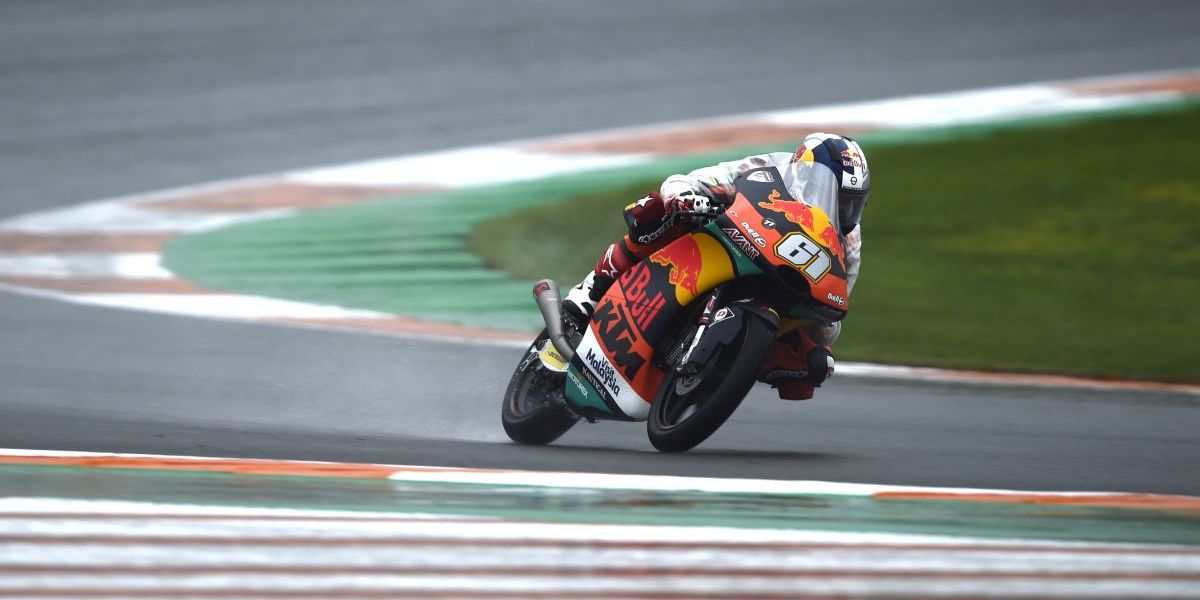 It was a whirlwind end to the 2018 season, and it definitely wasn’t predictable – Jorge Martin (Del Conca Gresini Moto3) was reserved and measured, John McPhee (CIP – Green Power) managed to step onto the podium and a relatively unknown 15-year-old won the race. Not your run of the mill race!

This race belonged to one man, and his fight for first place didn’t involve the usual competitors either – his name is Can Oncu (Red Bull KTM Ajo) and he left a rather big impression on Moto3 today. Starting as a wildcard rider, the youngster only managed to secure his place in the race because he won the Red Bull Rookies’ Cup and after qualifying fourth, it’s safe to say he dominated from very early on before taking Turkey’s first ever podium.

However, the race wasn’t as simple as Oncu romping to victory – Marco Bezzecchi (Redox PrustelGP) crashed out of second place and Tony Arbolino (Marinelli Snipers Team) had a mini high side which ripped first place from him.

The weather played a big part in the race, with 98 crashes taking place before the Moto3 race had even started and it’s safe to say many dashed hopes during the race too. Bezzecchi crashed twice (on the second crash both Redox PrustelGP bikes slide into the gravel trap), ending any chance of beating Fabio di Giannantonio (Del Conca Gresini Moto3) to second place in the Championship, but that didn’t stop him trying. Rather foolishly, the Italian carried on riding even though his livery was badly damaged and scraping along the track – he pitted but his team only clipped the bodywork back in and he re-joined the race. But his misfortune didn’t end there, Oncu actually lapped him as the youngest rode away with what could have been his podium finish.

Oncu didn’t just lap Bezzecchi though, he also lapped Darryn Binder (Red Bull KTM Ajo), his teammate for the race who had slide out of the race and re-joined too. Spectacular racing came from Arbolino who held his lead very well and is arguably the only person who could have stopped Oncu’s hunt for first place. McPhee also seemed to find something in himself and didn’t cecum to the wet weather condition, which due to a considerable ack of right-hand corners and cold tyres meant that many fell prey to it.

Di Giannantonio’s securing of second place in the Championship made it a Gresini 1-2 but you’d be forgiven for not noticing that due to the fanfare of Oncu’s race win. Arguably, the likes of Martin and di Giannantonio will be glad that they don’t have to race against such a talented and capable rider. Oncu, who snatched the record for youngest race winner away from Scott Redding on his final race weekend in MotoGP, and Celestino Vietti (SKY Racing Team VR46) who finished in a respectable tenth in his first really wet race in Moto3, will be dominant next year and they’ve arrived just in time for the changing of the guards.